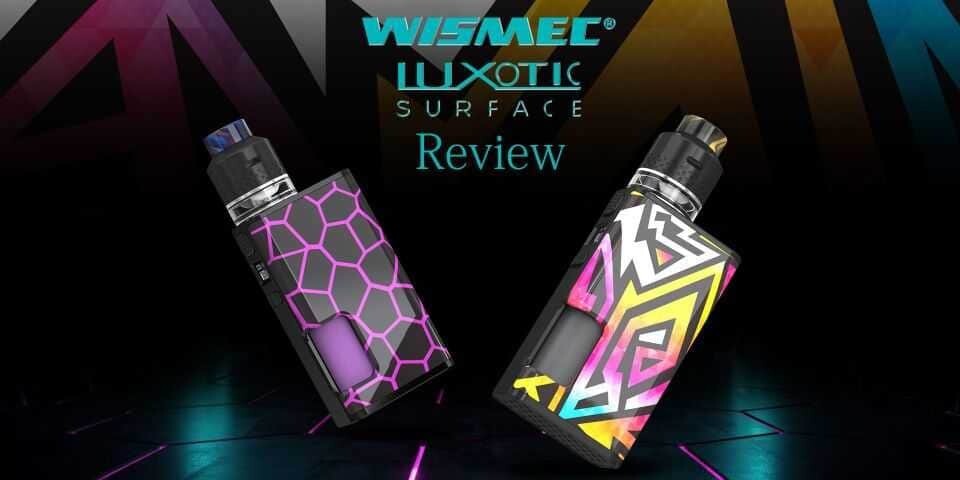 The release of Squonk mods have been relatively low recently, thanks to the mad hype with mesh coils and pod systems. But Wismec is here with a new model, the Luxotic Surface, which comes with a newly designed RDTA tank with a mesh heating coil. So how does this new design work out, tonnes of flavor or as damp as an otters pocket? We take a look at this new Squonk mod and compare it with the best vape mods on the market.

Wismec has been creative with the design of the Luxotic Surface releasing 4 different color versions, being a yellow and blue Unistar design, a red and black Basketball design, a multi-colored Linear design, and a black and purple Honeycomb design, all of which you can see above.

Being a single 18650 mod, it is small measuring in at just 78mm tall, 43.5 mm wide and with a depth of 25.5mm. Realistically a 26mm diameter tank will fit fine on this mod, but any bigger will create a small overhang.

The Kestrel tank is where the innovation comes! It is technically an RDTA, which means it has a tank that feeds the coil, although it's not a coil its a flat sheet of mesh, so that's where the confusion comes with others naming it different things! This is a new concept that Wismec are releasing and they are stating that this type of mesh sheet can last up to 3 months. Is that a big deal? Well, yes, kind of! In other RTA's for example, you can get a longer lifespan of the coil, by simply cleaning it up, but in comparison to stock sub-ohm tanks, 3 months would be hard to achieve.

The tank measures in at just under 37mm tall, 24mm in diameter and holds 2ml of e-liquid.

The Luxotic mod has a small screen, one of the smallest available, along with a larger fire button and 2 control buttons. Removing the battery door you see the squeeze bottle, the 18650 battery compartment and a sealed area protecting the screen and circuit board. On the base of the mod is another removable door, held in place with a magnet, this door gives you access to remove the squeeze bottle to refill, which you can do, but it's easier if you open the battery door too. The squonk uses a long rod with a rubber seal, which is designed to seal the bottle simply by pushing on and off.

Although this comes in kit form, you are going to need additional vaping products like cotton, coils, batteries, and juice.

The single 18650 Luxotic Surface is a 1-80W mod with 0.1W increments from 1-20W and 1W increments from 20-80W which is nice. It again uses the 5 clicks on and off feature, if you click the power button 3 times you enter the quick menu that allows you to select Wattage, Bypass, or Temperature control mode where you can select the coil type from Nickel, Titanium, Stainless Steel or choose the memory temperature coefficiency of resistance.

To access the main menu, press the fire button and up button simultaneously, here you can choose the screen option where you can add time, puff counter, time or voltage to the screen area, you can also choose the stealth mode, preheat function, timeout setting, see the version of the firmware, and the voltage of the battery. So although it's small, the menu features are pretty complete.

The tank does come complete and ready to use, which is good as the build is a little different, no a lot different to other RDTA coil setups, for one thing, there's no coil! To remove the mesh heater, you need to first unscrew the cover, then removing the Kanthal mesh you have access to the cotton, so the heater is just sitting on the cotton, not wrapped. We think they are using regular Japanese cotton here, but it is flat packed so using your own may take a little time. Wismec does supply some spare though!

The tank is a bottom fed RTA style and the glass tank holds 2ml of e-liquid. You do have the further addition of the squonk, but this just fills the glass tank, not meant to actually drip on the coil.

The Kestrel also has a good top airflow system that is adjustable and provides a good amount of air around the coil.

Now onto the important part of the review, the performance. We are using the supplied cotton as Wismec built it with the supplied mesh heater. We do recommend pre-soaking the cotton from both the top and bottom to avoid any scorching of the cotton.

Turning the mod to 40W to start we found the cloud level was good, but really struggled to find the flavor notes we experience from other mesh type coils. Leaving it at 40W for about 5-10 pulls is best to really make sure that cotton is well saturated and the impurities have burnt off the coil, or mesh strip!

Now turning to 50W, using a rather subtle 70VG Strawberry custard, we are still failing to get the best from this juice. After a few days of vaping the flavor notes are starting to appear, but nothing in comparison to even the best prebuilt sub-ohm tanks. Have to say we are a little disappointed.

Switching the cotton to one of the best cotton for vaping, we are experiencing a slightly better flavor coming through, but in our opinion, you really need a strongly flavored e-liquid to get the best from this kit.

The Wismec Luxotic Surface is certainly a nice looking squonk mod kit, and it's nice to see a new release of this type of vape mod as opposed to new vape pods. Wismec is also trying to push new heights with a new coil setup using a mesh strip made from Kanthal. Although the setup is nice, the functions work really well, we just felt the flavor production was rather muted. Using a stronger flavored e-liquid is a must with this kit, as subtly flavored juices are hard to taste.