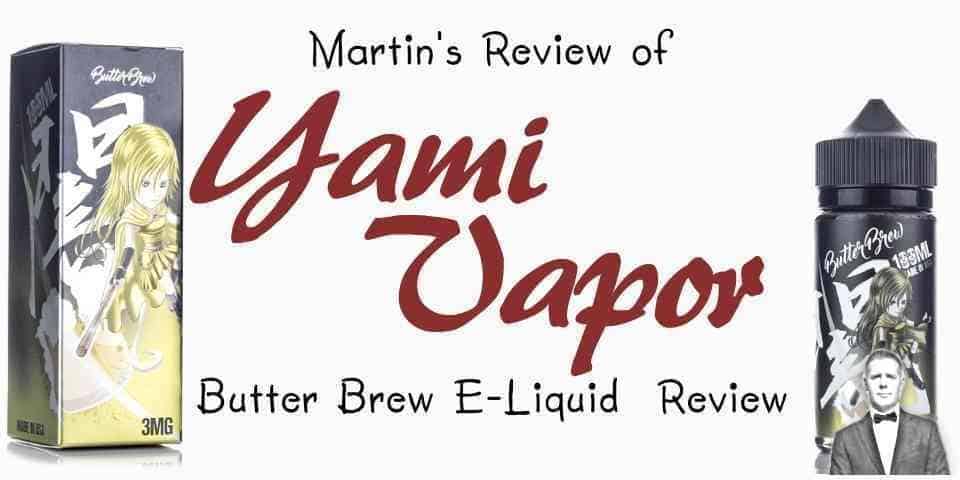 If you don’t know already, we have asked a regular novice vaper, Martin, to try some of the new e-liquids on the market. This time we gave him Yami Vapor Butter Brew to try, this is his journal:

The other day, I was out at a restaurant looking forward to filling my belly with a delicious burger and some fries, which for some reason they have to cook three times. When for no reason what-so-ever a fellow vaper approached me and asked what top bit and battery I had? He did call it something else but through his pointing, I knew he was on about what the other half calls my ‘dummy’. I was caught off guard and quickly uttered that I had no clue. This person laughed as he thought I was joking. You know that ‘ha ha ha, no seriously laugh?’

After a few minutes, he quickly realized that I had no clue as to what was what. I read out the names that are on the items but that is as far as my knowledge goes. Well apart from being very capable of changing the inner bit to my top bit at 70mph and also plugging in my battery at the same speed. (That’s the fastest we can legally drive here so 70mph it is!) This man stood there for a further 5 minutes talking to me about what he had and other bits and bobs. I politely smiled and nodded along with him until I caught the barman’s attention to order a well-deserved ice cold pint. Well, it turns out that the barman also wanted to have a full blown conversation about vaping before I could get my pint.

Eventually, I nodded at the beer tap and the barman began to pour. Never before have I had to endure such interrogation prior to a beer and a burger. As I took a lung full of vape before taking a gulp of my beer, the barman said that I couldn’t vape in here and laughed. As if I hadn’t been punished enough by the resident know it all and his sidekick, I now have to go outside with all of those rich people that fund our national health service.

Discrete is my Middle Name!

Little did the barman know, I have been in this situation many times and can vape without producing a cloud, well so I thought! As I sat down with the other half to look through the menu making small talk when all I could think about was the burger and my new flavor. As always the other half will look at every item on the menu and pretend to eat it in her head, whilst I sit there not giving a shit what she wants as I was that hungry I was considering just waltzing into the kitchen and tucking in.

Now women must have some extra training whilst at school as they seem to do this with most decisions. They will look at the item they really want,  talk themselves out of it, look at every other item (whilst wasting a lot of munching time) then decide that the item they first looked at is for them. They do this whilst shopping, ordering a drink, cars and probably with men. If there are any women out there that claim not to do this, you’re lying!

Anyway whilst she dashed off to the ladies, I sneaked a good lung full of this new flavor and blew out a humungous cloud that would have been named by a scientist had I not frantically waved it away. My efforts didn’t go unnoticed as no matter how hard you try the cloud will only disappear on its own terms. I was given a warning by a member of staff that if I did that again I would be asked to leave. As that member of staff turned their back I was like little Jonny at school and decided that I would ignore them and took another lung full. This time I was smarter and held it in.

The Yami Vapor Butter Brew flavor was good, very good, a smooth butterscotch flavor where one vape is just not enough, even though I have one of the best electronic cigarette products on the market, well that’s what the other bloke told me earlier! It was that good in fact that I was prepared to get barred from a very nice establishment and miss out on filling my belly. The other half returned and I said ‘I’m just popping out for a vape’. Yep, I got those looks, it was like I had just danced in dog mess and decided to walk it through the house scrapping my shoes. We put up with a lot of men but if I want to pop out for a vape, especially when it is this nice then I will. I know it will cost me an extra drink and maybe a pudding but hey it was worth it.

On my way out, I made sure I wasn’t seen by Mr. Interrogator as I wanted to enjoy this. As I was outside causing a new ecosystem in the garden of the restaurant, incoming patrons were commenting on the lovely smell it was emitting. As I stood there smiling looking like I had just won the lottery, my top bit was empty. She had the car keys and my juice was beyond reach. I had to wait 30 minutes to be released so that I could continue this moment.

My Thoughts of this Juice

I thoroughly enjoyed this flavor and would use this all day, use it with a really good vape mod and you’re enjoying some of the best vape flavors around! It may lead to me becoming single but sometimes in life flavors will win. If you’re looking to try something new then I would say try this flavor as it will make you forget about what is going on around you and put a smile on your face.