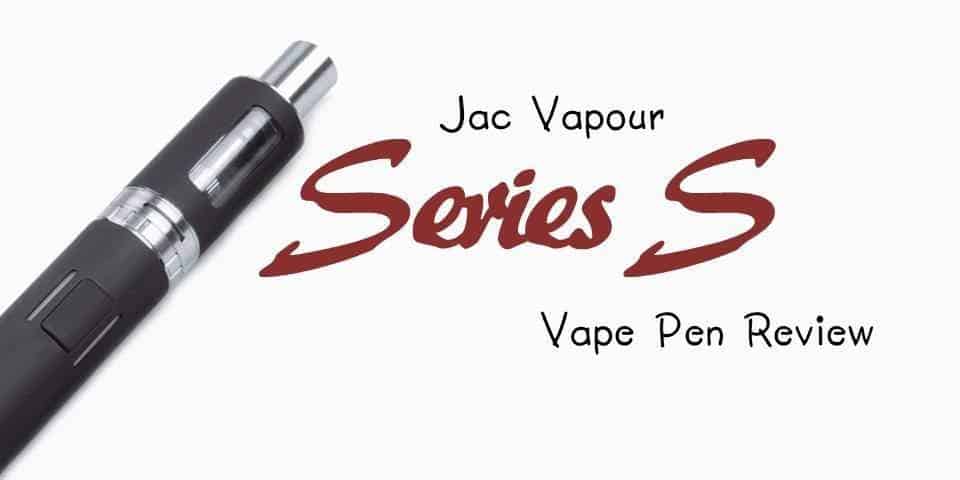 Jac Vapour has been on the move lately, reaching out beyond its solid Cigalike base to attract vapers who prefer more advanced options. They now have mods and have introduced vape pens as well. Fans of the company know that they’re really good at what they’ve been doing so far, but it’s only natural to wonder whether that past success means that everything they produce will be just as solid. In this Jac Vapour SERIES-S Review, we’ll examine this new vape pen product and see if we can effectively put those questions to rest.

Like most vape pen packages, the kit for the Jac Vapour SERIES-S comes with everything but the juice needed to get your vaping started. There are a special battery and tank, the obligatory charger and user manual, and two S-coils. All you need is your favorite blend of e-juice, a fully charged battery, and you’re ready to experience the device for yourself.

As far as appearances go, it’s a vape pen. That means that you’re not going to see a bunch of fancy screens, or bells and whistles to play with. Instead, you get solid stainless steel construction in a pen that measures 17mm x 79.5mm. It uses a standard 510 connector and provides resistance that enables sub-ohm vaping. The company marked out sub-ohm capability for its mod product too, so it’s clear that Jac Vapour is trying to make inroads into that segment of the market and thus trying to make it one of the best e-cigs to quit smoking along with more advanced features.

Now, here’s the thing to take note of when you’re considering this device as an option. Most Cigalikes try to mimic the cigarette experience – and most fail. The fact is that they’re generally too restrictive, and require a strong draw to generate a good throat hit. That’s why so many smokers try Cigalikes and then go back to their cigarettes; there just haven’t been many products that effectively replace that sensation or ease-of-draw in a package that’s affordable enough for the average smoker to experiment with.

The Jac Vapour SERIES-S just might be a trendsetter in that regard. When we tried this product, the first thing we noticed is how similar the draw is to those burner cigarettes. Of course, this means that it’s still a little too restricted for most serious vaping fans – but it should provide smokers with the type of familiarity that can help them to stick with vape pens rather than abandoning their cessation efforts. If that ends up being the case, then we will all owe a debt of gratitude for Jac Vapour for this design. You can learn more about the different types of vaping in this article.

Of course, you can get more vapor out of the device if that’s your goal. All you need to do is use the sub-ohm coils and watch your airflow increase dramatically. That will help you to produce bigger clouds of vapor, while still maintaining the natural flavor of your juice. Just don’t expect to fill the room with your vapor, because this simply isn’t made to accomplish that goal. It can, however, provide more than enough vapor production for most users. Another advantage is that Jac Vapour has some upgrades available, so you can move onto vape mods such as the Series B Tilt from the same company you trust.

In our tests, we found this to be a truly comfortable device to use, and a great option if the flavor is your main concern. It’s important to remember that this is still a vape pen and not designed for anything other than standard vaping use. On that front, though, it performs admirably. We ran through several charges – it takes about an hour-and-a-half to get it recharged – and enjoyed rich juice flavor throughout the entire experience.

All is not perfect, however and it’s far from the best electronic cigarette we’ve tested like those found here. In our view, they could have done a better job with some of the design elements. For example, the controls for the airflow don’t seem to lock into place – which means that we ended up inadvertently adjusting them from time to time. After several such incidents, the annoyance becomes a bit of a concern. You also can’t fill it from the top – something that the company would do well to remedy in any future versions of the pen.

With all of that noted, the question we need to ask is this: is the Series-S vape pen good enough to warrant a recommendation? Our consensus is that it is, but that recommendation needs to be qualified. If you’re an experienced, die-hard cloud chaser, you probably won’t be impressed by this product. On the other hand, new vapers and even many intermediate users will find much to like about the Jac Vapour SERIES-S. It’s portable, easy to use, and reliable. If those features are important to you, then this might be a great option.