What are Mechanical Mods? 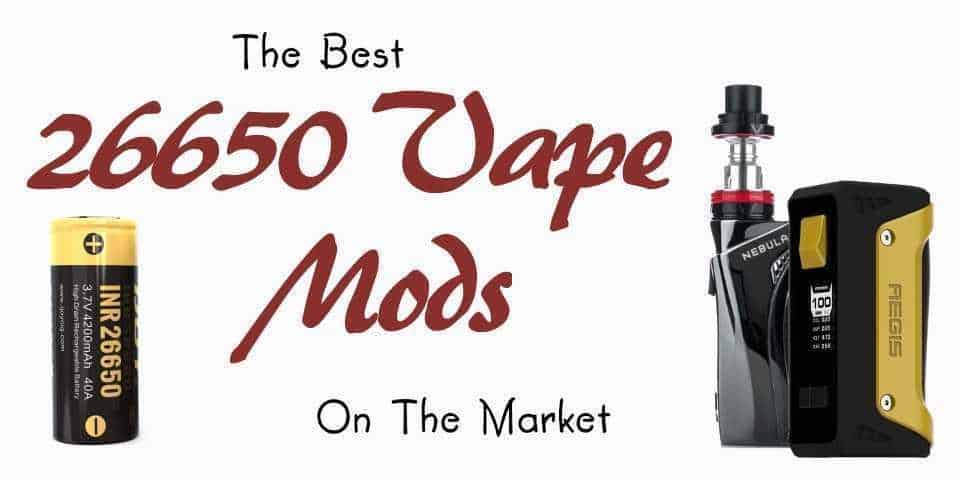 The 26650 mods are one of the hottest vaping lines in existence today. It helps that the batteries offer real price value, sound battery life, a great deal of power, and reliability. With that said, it’s only natural that users would be drawn to devices that incorporate these batteries into their specs. After all, the key to every great vaping device is a great batter, right? Well, we think it’s about time that everyone got to know some of the better mods that rely on those great batteries. Here are our picks for the best 26650 mods available today.

The Best 26650 Battery Mods We Would Recommend

The Geek Vape Aegis is a modern vape mod that is not only made with military standard shock testing but looks the part as well! Completely scratch and water proof, well to a really high standard! Performance is really good, with the option to switch between the 18650 battery and 26650 battery, we are truly impressed! The power can go as high as 100W and capable of temperature control. Geek Vape are well known in the industry and a trusted brand.

The Vaporesso Nebula Mod is one of the best vape mods that Vaporesso have produced in recent times, it takes one 26650 battery and can fire up to 100 Watts with its variable wattage settings. You can also use a traditional 18650 battery on this mod if you prefer, but can only produce 80W with this option.

We also like this Ijoy Solo Plus mod, due to its sleek design and easy controls. It offers great flexibility to its users and can fire at a nice range of resistance levels. Wattage can run between 5 and 85W, making it a versatile device for almost any vaper. In addition, it offers great temperature control and a trusted brand that stands behind its products. How can you go wrong?

Another 26650 mod from IJOY this time it’s the Limitless LUX dual 26650 box mod, that’s right it can take 2×26650 batteries and thus capable of firing anything up to 215W also with temperature control modes that support Nickel200, Titanium, and Stainless Steel coils! This mod is for the vapers who like to vape at higher temperatures and yet be able to vape all day with a single pair of batteries!

Check Out Our List Of The Best Box Mods

The Flawless is an adorable mod that looks so simple that you could almost mistake it for some other electronic device. It offers ease-of-use, wattage that can run as high as 100 watts, and temperature control. It’s also outfitted with kanthal coils but can use Ni200 and titanium as well. That flexibility allows you to operate at temperatures ranging from 212 to 572°F.  Everything about this device is just what its name claims: flawless, or is it? We’ll get to that right now!

We love Wismec. They make some of the most interesting vaping devices in the marketplace today. So, we’re pleased to be able to include one of their mods in this list. The Presa is a futuristic-looking device that has an easy-to-manage design and an even easier-to-read display. Its use of the 26650 battery is ideal since all that power needs to be harnessed properly. The Presa offers that control that every vaper needs, and includes an innovative fire switch that locks mechanically for increased protection. It is truly state-of-the-art in every way that matters.

On the larger side of the aisle, we have one of the bigger entries in this group: the Congestus Dual 26650 Telescopic Mod. This thing is larger than most pictures can accurately represent, and there’s a reason: it has two of those powerful 26650 batteries. Because, obviously, the only thing better than one 26650 battery is a pair of them. That combination offers all the power you need and greater sustainability for any vaping session. If you’re out and about, you’ll be grateful for the extra power.

Of course, there’s a reason that it’s called the telescopic mod. You need to extend it to use two batteries. If you choose to forgo that option, you can just use one and still get all the great benefits that this delightful device has to offer.

Who doesn’t love a mod that carries itself like a boss? While it’s not really something that everyone will be able to afford – it comes plated with both brass and silver, mind you – that doesn’t mean that it’s not worth a mention. This device is built to produce tremendously large clouds of vapor, making it perfect for the cloud-chasers out there. It’s also probably the single most gorgeous vaping device we’ve laid eyes on in recent years – both simple and elegant, and loaded with power. If you can afford one, get it.

There are others, of course, but we think that this group represents the 26650 mods class as it should be represented – with quality, precision, and reliability. The 26650 battery continues to grow in popularity, and we expect that other new products will emerge and force their way onto lists like these in the future. For now, though, we can comfortably recommend all these wonderful devices to any fan of this battery. That said if you prefer the traditional products then take a look at what we believe is the best e cigarette by type, check to see if it’s still the best here. You’re bound to find the perfect product!