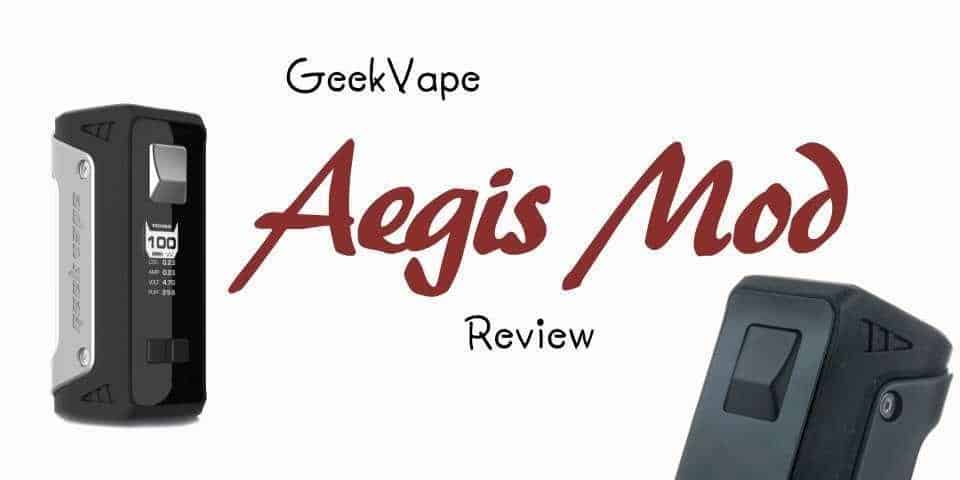 In-depth Review of the GeekVape Aegis

If you’ve ever dropped a vape mod or other vaping device, chances are that you’ve experienced the frustration that can occur when an expensive piece of technology suffers damage from fall impact. It’s never happened to me (knock on wood), but I know friends who’ve experienced it firsthand. Many manufacturers have tried to remedy that problem by using durable alloys and other construction materials to make their devices more impact-proof. Few have succeeded. In this GeekVape Aegis review, we’ll take a look at one product that meets that challenge, and see if its other qualities can match its ability to survive bad luck and accidents.

The Company Behind The Name

GeekVape is one of the better-known manufacturers out there and has a nice track record of success, producing some of the best vape mods. That should inspire confidence – and it does. With the Aegis, the company brings us a vaping mod that offers a wide range of capabilities to go along with its sturdy construction, waterproofing, and impact resistance. This device is built to last and is designed to occupy a place in the tech world for many years to come.

First, let’s examine its features. The Aegis is a 100W temperature control device, powered by one of two different batteries: the 26650 and 18650. In fact we actually ranked this device as the best 26650 mod. That was a welcome sight for our test group since we have plenty of both on hand. The device exterior is designed around a rubber-coated C-frame for maximum survivability. The battery case inside that frame is covered with a leather exterior too.

In short, it has layers of protection designed to ensure that it lasts and withstands most unforeseen events. It’s been described as “military grade” and with good reason!

If there’s one weakness in that design, it might be the screen. It’s an oversized display that provides easy access to information about settings and other details. However, it also looks like an area that could be vulnerable to any accidental impact in a way that smaller screens wouldn’t. That’s just speculation, though. For all we know, GeekVape took that into consideration and used durable glass in its construction.

The device comes in an array of color options, so you can likely find one that catches your eye. The basic color scheme remains consistent, however, with that black rubber on the frame. There are different colors for the fire button, leather, and stitching, though, that allow you to make your choice more personal. For us, the hardest part would be having to choose just one, since they all look so incredible.

Performance wise, there’s a lot to love about the Aegis. Despite using just one battery, the mod can achieve a power output of as much as 100 watts with ease. It offers variable resistance so that you can fire your device at ohms as low as 0.05. It also features many of the most cutting-edge tech benefits offered by other top-of-the-line product offerings, including TCR, watts curve, and other great features. This is science in modding at its best. Granted, it’s not exactly the perfect best e-cigarette to quit smoking with due to the more advanced specs, but if you’re ready to move onto box mods and a little clumsy, then it’s a great choice!

In our trials, we were looking for several key metrics to be met. Could the Aegis produce consistent power, sufficient for our vapor production and taste retention needs? How easy to use were the controls? And how enjoyable was the time we spent exploring this new mod?

Where power is concerned, we had no issues with the Aegis. In our testing period, we discovered that this is one reliable device, capable of providing sustained power for hours. That enabled us to achieve some pretty impressive vapor production that we weren’t certain we could get from this type of mod. Our taste tests were even more impressive, though, as we enjoyed pure e-juice flavor throughout our sessions. There was no drop-off in quality as the sessions wore on – indicating that the mod is designed to provide consistently pure flavor. Well done, GeekVape.

The controls were surprisingly easy to master, and the button layout and performance was excellent as well. Whereas some mod buttons stick when you use them, we had no such problems with the Aegis. As noted earlier, the display provides quick access to information, and everything worked as it should.

The experience was enjoyable as well, right up there with all the best vape products on the market. There was no frustration due to a steep learning curve, and no problems getting the mod to do what we wanted. That’s important and should signal that this is a great choice for newer mod users. Overall, the GeekVape Aegis performed at a consistently high level, earning it our unqualified recommendation. If you’re in the market for a great new mod, make this one your first choice.