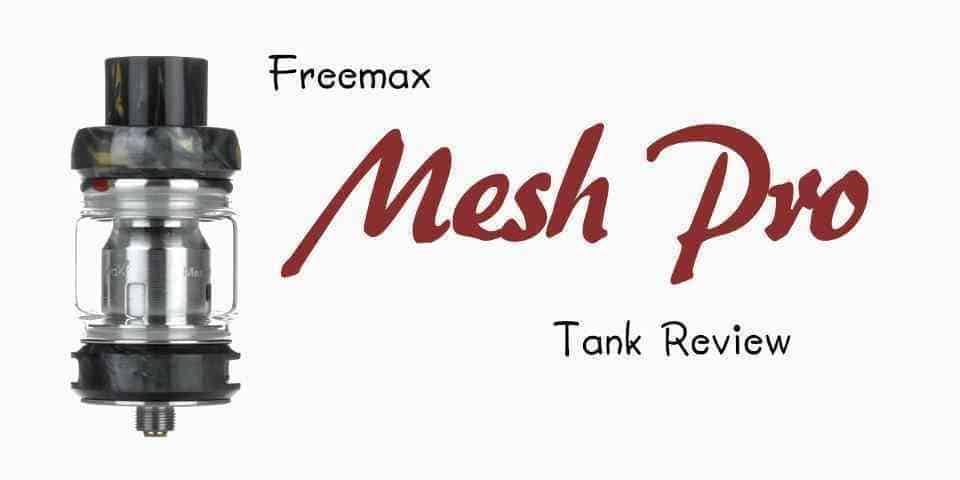 With the latest craze in sub ohm tanks being all about the mesh coils, Freemax is the first, but probably not the last, to introduce the market to multi (double or triple) coil atomizers all with the loved mesh wires. Incidentally, according to their site, they were also the first to actually release the mesh coils back in 2017 on the Freemax Fireluke, so the big question is this new coil system a must have or is there a reason no one has released a version before? We take a closer look to see.

The Freemax Mesh Pro is a big tank, but with that, you get a nice large 6ml capacity for your e-liquid. They have kept it to a 25mm diameter and has the height of around 60mm. Some of the smaller vape mods will feel a little top heavy, but the majority of the best box mods house this tank very well.

Of course, Freemax is releasing the Mesh Pro in a whole variety of colors which include black, purple, pink, orange, blue, green, along with a number with a fancy etching design also in a variety of colors. So you shouldn’t find it a problem finding a matching color with your mod.

The tank has a nice top fill hole which is found by locating a small red dot and sliding the top cap over. There is only one fill hole, but it’s pretty big, but what they have done is designed a vent hole to allow the air to escape and avoid those spillages we all have experienced with other single fill hole systems.

You can see the vent hole down the mouthpiece when the tank is open. This vent system has actually been patented by Freemax, so it’s unlikely we will see this on other tanks.

Each of the coils is made up of a custom Kanthal mesh plate with a honeycomb design, except the Stainless Steel coil which is specifically for temperature control vapers. This type of mesh design is the best way to produce a constant and even heat to the cotton, maximizing the flavor and taste. This is helped with the amount of surface area of the mesh touching the cotton, and again, Freemax has designed the mesh to be smoother and therefore producing more surface area to the cotton.

All the coils also have a redesigned wicking hole, giving an even wicking process to the coils to avoid any of those dry hits we’ve all experienced. The design pretty much stops this dry hit problem, as long as there’s e-liquid in the tank of course!

Advantage of the Mesh Coils

Due to the amount of surface area around the cotton being dramatically increased with mesh coils, vapers can now rank up the wattage of their mods to produce a warmer vape without the sacrifice of flavor. Many say that the flavor is also improved at the lower wattages as well thanks to the more evenly heating process.

Most sub-ohm tank manufacturers now produce mesh coils, but Freemax was the first, and are also the first to produce double or triple mesh coils.

We’re testing this tank with the pre-installed double mesh 0.2ohm coil and the spare single mesh 0.15ohm coil that come free with the tank kit, we’re also using the Sxmini SL mod. One problem we did experience with the tank was the screwing of the top cap when replacing the coils, it’s pretty fiddly to get it square and can be annoying. It does take a little getting use too.

The double mesh coils with the newly designed wicking system works great, a huge problem with other double mesh coil tanks is the lack of wicking and slight deterioration of flavor. But the flavor on the Freemax Mesh Pro is awesome.

The Single Mesh 0.15ohm Coil is also really good, much to our disappointment as we do like to write a few bad things about the release of new vaping products!

It’s so encouraging seeing a company that initially introduced the market to mesh coils has not been sitting back enjoying their success. Instead, they have been busy designing an improved system and the results speak for themselves. Something that all the best vape brands should do!

The Freemax Mesh Pro tank is one great tank which we’re sure will be inherited in other sub-ohm tanks very soon due to the pure superior taste and maximum flavor the coils produce from your e-liquid. A great selection of coils, good air flow, and great design, there’s really not much wrong with this tank.