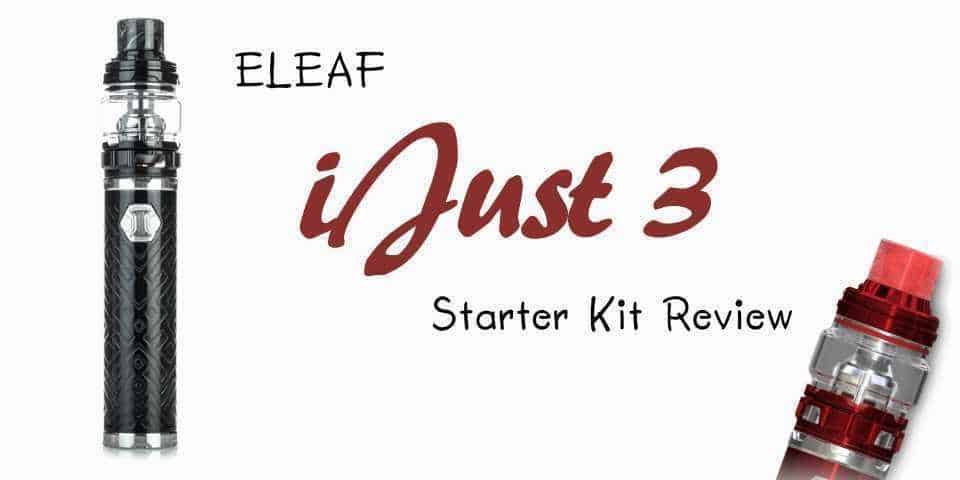 Eleaf saw a lot of success with their previous iJust series pens, so they decided to move thing on and improve this device with a couple of subtle yet awesome changes! So how does the iJust 3 compare with all the best vape pens out there, and is it worth the upgrade? We take a closer look to see!

The design is specifically designed on their old but popular iJust NexGen pen only incorporating an etched design within the battery, available in a number of colors which include silver, red, purple, blue, dazzling or rainbow, and of course, black. To be honest all the colors look really good.

With a lovely big 3000mAh battery and either 6.5ml (or 2ml tank if you live in Europe), the size of this vape pen is pretty good! Measuring in at 136mm tall (130.5mm for European version) and 25mm diameter, Eleaf has done a great job in keeping this kit relatively small.

The iJust 3 has been designed with simplicity in mind, this means there are no wattage settings, no screen or no menu sections, it’s all preset and the only indicator you get with the device is the battery life, which has a color led around the fire button, which flashes different colors depending on the state of the battery.

The fire button is a reasonable size, in a hexagonal design, on the back is where you’ll find the USB connector to charge the battery. Bellow the USB port you’ll find the LED light to indicate it’s in charge. When charging you can use this device.

The top of the iJust 3 battery is where you can find the 510 spring loaded connector, so if you don’t like the Ello Duro tank, you can use your own, but bear in mind this is an 80W battery, so make sure the coils are correct to suit.

The iJust 3 is really simple to use so the functionality of this device is relatively limited. Clicking the fire button 5 times turns the device on and off, you can tell with the flashing lights behind the button if it’s on or off.

The only other thing to know about is the led colors and what they represent. They do tell you the charge state of the battery and green represents 100-60% full, orange 59-30%, blue for 29-10% and when it’s below 10% the button will flash red, indicating it needs a charge!

One last thing to note, the iJust 3 does come with a circuit protection system which helps stop the over-charging, over-current and over-discharging of the battery. This is really encouraging for those new vapers looking at the best e-cigs to quit smoking, as you are fully protected.

Eleaf is keen on delivering their new tanks with the mesh coil design due to its increased popularity over the last year or so. The ELLO Duro tank is exactly that, with prebuilt mesh coils designed specifically to produce the maximum flavor hit.

The Ello Duro has 2 different mesh coils available, now, although we all know it as a mesh coil, Eleaf are calling them something slightly different, i.e. a net coil and multihole coil. Let’s just get this straight, they are a mesh and the only difference between these names is the coarseness of the coil. The 2 coils are the HW-N 0.2ohm Kanthol net coil, and the HW-M 0.15-ohm Kanthol multihole coil. The HW-N has the finer course mesh amongst the two.

The tank also comes with a new convex glass design enabling it to have 6.5ml e-liquid capacity but does come with a spare straight glass if you prefer. (This convex glass is not available on the European version however due to the TPD legislation). The tank also features a top-fill design where you slide the top cap to one side and use the hole with a flap to fill your juice. It also has a triple airflow control on the base.

Fully charged you are going to get around 80W out of the iJust 3 battery, but remember, as the battery slowly discharges this output is going to be reduced so you will notice a slight decrease in performance, especially when you run when the battery is less than 10% full.

That said, let’s see how it performs? Fully charged and with the 0.15-ohm HW-M coil in the Ello Duro tank, the iJust 3 is incredibly responsive. IJust state that the firing speed is just 25 milliseconds, which for a vape pen is incredibly fast and you can definitely tell!

Let’s be clear now, the taste of these coils are indeed everything Eleaf where hoping for, they have designed both these coils perfectly to pull every flavor note out of your juice. The airflow is great when wide open, so thumbs up there. The performance of this device is right up there in comparison to the best e-cigarettes on the market.

The iJust 3 with Ello Duro tank is one easy vape pen to use. Simply 5 clicks on, 5 clicks off and that’s it. But what you do experience is a great performing kit, especially thanks to the coarse mesh or net coils. They’re not the best mesh coils on the market, but if you’re new to this design then you will be impressed.

Overall it’s the best iJust that Eleaf has produced, kicking the butt of their previous and popular releases.