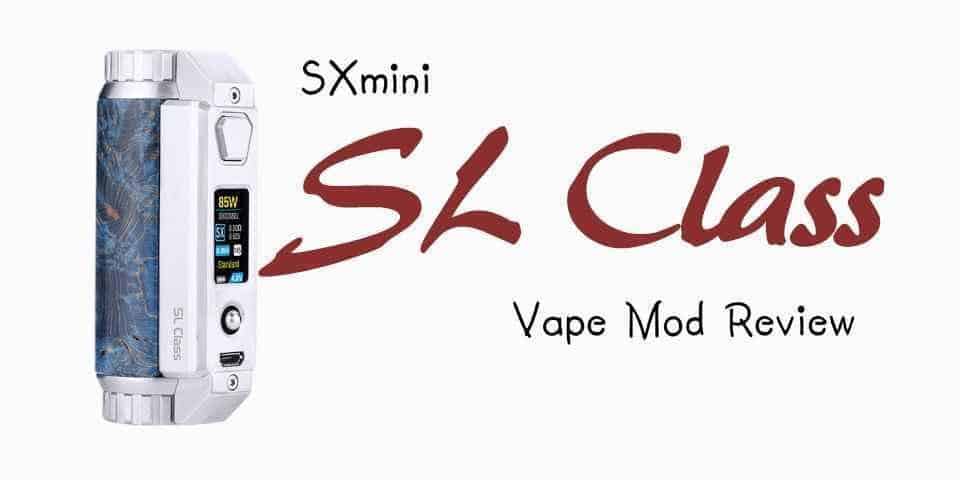 There’s a new single battery mod around with the YiHi SX485J chipset, so the experienced vapers out there who know about the Yihi chip are getting very excited about this mod! So let’s take a look at the new SL Class and see if it competes with the best vape mods, especially those single battery mods.

We have to say that the SXmini SL Class mod is designed a little differently to the traditional mod with a cylindrical look surrounding the battery with a square compartment for the screen and electronics.

The battery chamber is a little on the large size for a single battery mod, but that’s for good reason, it holds all 3 types of batteries; the traditional 18650, the 20700 and of course the 21700 battery, producing a maximum output wattage of 100W.

On the very top is a 510 thread with spring loaded pin, the side holds the large fire button, the screen, and a toggle switch to move up, down, side to side and click. Below the toggle switch is the USB cable for firmware updates to the software and provides charge to the batteries.

The base of the mod is where you can unscrew the battery cap, which has holes in for battery ventilation.

The SXmini SL Class as we said uses the YiHi SX485J chipset which can be a little complicated as we experienced in other mods using this chipset, like the Pioneer4you iPV Trantor. But on the SXmini SL Class, they have included both a novice mode and expert mode to make it easier for the user.

5 clicks turn the mod on, upon which you are presented with the main screen which includes indicators for the current wattage or temperature, the joules, resistance of your coils, the voltage, amps, the current memory setting, vape strength, a battery indicator along with the battery voltage. So as you can see a lot of things to play with!

If you want to enter a simplified area, simply hold the toggle switch to the left for 3 seconds, you will enter the novice mode and the screen changes accordingly and just shows the current wattage, battery voltage, battery indicator, resistance of the coil and working voltage. This is what we mainly use, so although it’s marked as novice mode, I can see a lot of vapers using this!

Again to change any settings in novice mode you click the toggle button and select the setting you want to change, i.e. the wattage, and then use the toggle up and down to adjust accordingly.

There’s not much difference in performance between novice and expert mode, although there are many adjustments that you can make in expert mode to finely tune the mod to your requirement. That said they both fire up to 100W and novice mode is obviously good enough for most vapers!

We always expect a lot out of the YiHi chip and the SXmini SL Class Vape Mod is no disappointment, it just rocks and easily one of the best vaping stuff we’ve tested in some time. Really responsive and will for sure get the most out of the tank you use.

YiHi chips are known for their great accuracy, so anyone looking at temperature control will also not be disappointed with the YiHi SXmini SL Class Vape Mod, its right on the money!

If you’re looking for a single battery mod, then possibly the YiHi SXmini SL Class Vape Mod is one of the best, if not the best around right now. Using a single 18650 battery isn’t going to last long, the battery just drains way too quickly, so we recommend using the larger 21700 battery, but the 20700 battery also performs pretty well in this mod.

For the price though, which is particularly high, we were a little disappointed and find it hard to justify. It does offer you great customizations, albeit a little hard to figure out on day one, and the performance of the mod is outstanding but priced above most vape mods including dual battery mods, is a hard sell.

Would we recommend it for new vapers or those looking at ecigs to quit smoking? Well no, it’s really more for the experienced vaper, who’s going to get a lot more out of all those advanced settings.