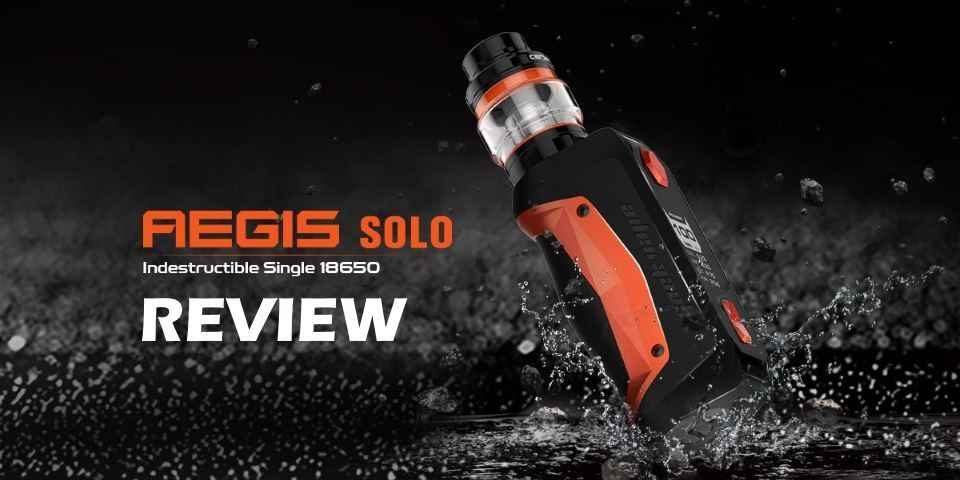 Geek Vape has just released a new single 18650 battery, 100W mod in 2 different kits. First, you can get the standard Geek Vape Aegis Solo kit that comes with the Cerberus sub ohm tank, the second choice is the Aegis Solo Tengu kit, which as the name implies, comes with the Tengu RDA tank. So, which is better, how does this mod perform with both tanks and does it compete against the best vape mods on the market? Let’s take it for a review to find out!

The mod on both the Aegis Solo kit and the Aegis Solo Tengu kit are quite obviously the same, available in a number of different colors and designs which include black, gunmetal, orange, red, blue and green. Which is a nice selection, but the prominent color on all these mods is black!

As it's a single (removable) 18650 battery mod the size is pretty small, measuring in at 86.4mm tall, 41.2mm wide and 31.5mm in depth, although we say its small, it does come in a little bigger than their previous Aegis Mini kit, although that model has a built-in battery, so it's expected to be smaller!

It does have a nice feel to it, with the shock resistant casing that we see amongst all of the Aegis models. On the front is the protruded fire button, a nice sized screen, and the up and down buttons place vertically under the screen, which is different from the Mini model. Also, the micro USB port can be found on the side, which is a nice change. On the bottom of the mod is where you can unscrew the battery cap to change your battery and on the top is the tank thread, slightly off center.

The kit comes with everything you need, except juice, and a battery so you don't have to buy any other vape products to use it.

The Aegis Solo mod utilized the familiar 5 clicks on/off feature which immediately turns the screen on. Here you can see the current wattage, a single battery indicator, coil resistance, amps used, the voltage used, and a puff counter, which is pretty much all you need to know!

Clicking the fire button 3 times allows you to adjust the settings, first, you can change from power (wattage control) to bypass, VPC (adjust your power curves), TCR, or change to temperature control by choosing your coil type titanium, nickel or stainless steel. You can also lock in the resistance of the coil within this menu as well as being able to reset the puff counter.

All in all, a pretty simple mod to use and operate, nothing too complex and not anything we haven't seen before.

The Cerberus tank we have reviewed before, with the Aegis Mini tank and it's no different in this kit. With a 5.5ml capacity and comes with 2 0.3-ohm resistance coils and best vaped around 30-40W, so it is a low wattage coil, so don't expect as much flavor and vape you get from the best sub ohm tanks available. It has top fill support, by turning the top cap a half turn which reveals 2 large fill holes, one for your juice bottle and the other to allow the air to escape.

The airflow is also adjustable with the large bottom airflow control.

For the more experienced vapers, GeekVape has the Aegis Tengu kit available which obviously comes with the Tengu RDA instead of the Cerberus tank.

The Tungu RDA has a 6ml juice well which is pretty deep for an RDA. It is a dual coil RDA with one of the simplest decks to build on, so perfect for new users wanting a simple RDA to try. You have 4 separate screws on the deck, so no sharing holes for the coils, which is great!

The airflow is controlled by turning the cap where the honeycomb airflow holes slowly close, these airflow holes are pretty close to the coil to maximize the flavor from this tank. What also nice about this tank is that Geek Vape also provide a squonk pin within the kit, even though the Solo kit is not a squonker!

Let's start with the standard Solo kit with the Cerberus tank. We vaping it with the stock coils at 32 Watts which we found to be the sweet spot for this tank and it does produce a good amount of vapor. The flavor isn't great, but with the stronger flavored e-liquids, it should be fine.

The Tengu kit, on the other hand, is, in our opinion, a much better kit, producing such better vape flavors with a deck that's super simple to build on. With 2 coils built within it measures around 0.2-ohms. We're vaping at 60W with an e-liquid of 70/30 Vg/Pg consistency. The result is a great thick vape cloud packed with a deep flavor. Compared side by side, there is simply no comparison in vape performance. That said, you do need to carry a bottle of juice around with you with the RDA version, so that may put people off.

If you're not sure if this type of e-cigarette will suit you, then check out our guide of the best e cig for each type of user, which should help in deciding.

Geek Vape is offering 2 kits with their new Solo Vape mod. Users have the choice of the standard Geek Vape Aegis Solo kit which comes with the rather basic, low wattage Cerberus sub-ohm tank. They are meshed coiled, but the flavor is rather dampened thanks to the low wattage of these coils.

The other choice and our preferred choice is the Geek Vape Aegis Solo Tengu kit, which as the name implies comes with the easy to build dual coil Tengu RDA tank. This version vapes at higher temperatures producing a better vape overall, but with the inconvenience of having to drip.

The Solo mod is a great single 18650 battery mod, that's not only small and ergonomically friendly, but it is also easy to use and has all the features you see on the more expensive and bigger mods.