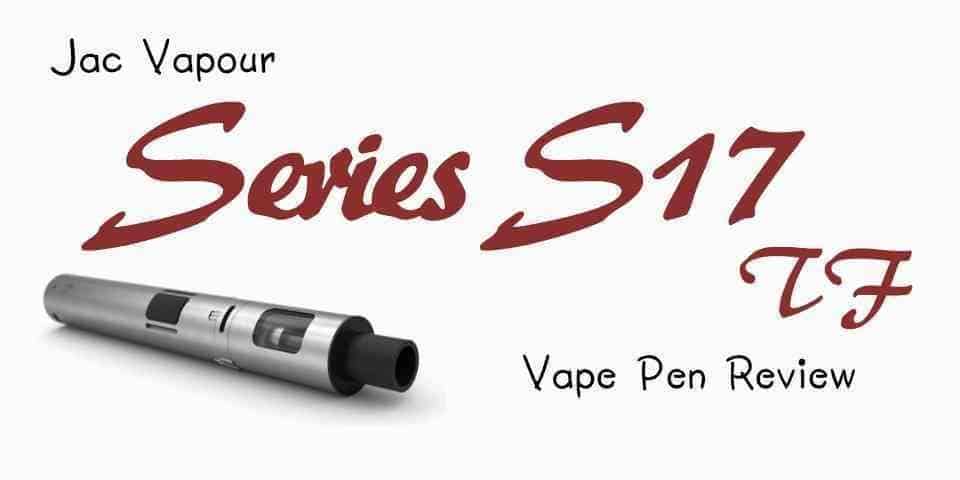 Jac Vapour has taken their popular S series and improved it again with the new Series S17 TF. Built for the vaper, Jac Vapour has kept to keeping things as simple as possible without compromising the vape. So how does the new S17 compare with the best vape pens on the market? Let’s take a look to see.

This vape pen is small, measuring in at just 116mm tall, that’s with the tank on, and 17mm diameter, it will easily fit in your pocket, to the extent that you forget it’s there.

The main body of the pen, including the tank, is made of a steel alloy with a rubber-like finish which gives the pen extra grip when vaping it. That said the Stainless steel version has a lightly brushed finish.

The fire button can be found pretty easily and rather large, again to make it easy for the vaper, with 2 lights either side to let you know the battery life.

The tank comes in a matching color and has a nice airflow control at the base. Holding about 2mm of juice it’s relatively on the small side, but putting anything larger on this device would not make sense. The new design comes with top fill functionality, simply unscrew the drip tip and you’re presented with 2 pretty large fill holes. This is good as it has plenty of room to allow the air to escape when refilling.

The Series S17 TF, TF standing for top fill, has a 900mAh built-in battery, which is about average in comparison to the best e-cigs and charged with the supplied USB cable you get with the kit, the size of this battery is about average considering the size of the device. You turn the vape pen on with the usual 5 clicks of the fire button. The lights on either side of the button should flash 3 times to let you know it’s on. Repeat the 5 clicks to turn the pen off.

It does come with a number of safety features to keep the vaper safe in case of any damage, like, overcharge protection, short circuit protection, and high amp draw protection.

The Jac Vapour Series S17 TF vape pen comes complete with 1 atomizer head; of 1.0ohm which is more suited to those who prefer mouth to lung inhales, but Jac Vapour also sell 0.5ohm heads which are perfect for direct lung inhales.

Using a 0.5ohm coil with the device produces a good amount of vapor, especially considering the size. The flavour comes through subtly and overall is a pretty smooth vape.

The airflow is a little resistant, even with it wide open, but this helps the flavour. If you want more of a hit and like this brand then we suggest taking a look at the Jac Vapour Vim box mod kit they have just released.

Overall the new Jac Vapour Series S17 TF vape pen is a pretty good vape pen aimed more at the new vaper wanting to get more out of vaping. If you’ve tried something a little more advanced or a sub-ohm tank before, then you may find the vape a little withdrawn.

New vapers love this pen as it’s a step above the pod vapes and cig-a-likes, giving a better vape cloud and deeper flavour.  Jac Vapour has designed this vape pen with the beginner in mind, making it even easier for a new vaper to start vaping and all for less than £25!