The Good Vs Evil Of Electronic Cigarettes 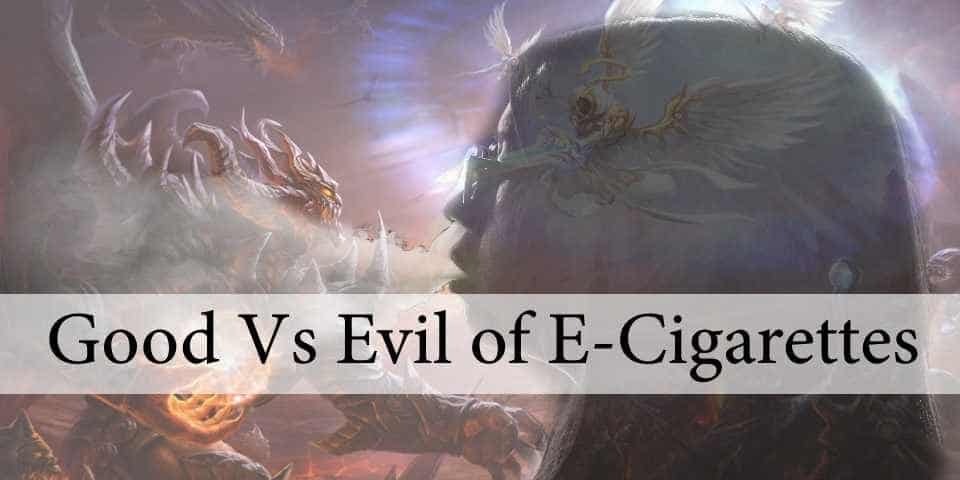 
The use of vape devices is a phenomenon that is rapidly spreading. It has managed to gain a lot of momentum in the past years due to it being marketed as a safer approach towards trying to quit smoking. For regular, long-term smokers options to stop this life-threatening habit are relatively varied, yet the practice of puffing smoke is hard to quit. If nicotine patches, nicotine gum and other products like them can aid you in your journey towards being smoke-free, what they fail to accomplish is having this ‘quick fix’ effect for your need to puff.

With this in mind, e-cigarettes and other vaping products aid smokers by giving them a safer alternative (arguably), while also allowing them to maintain their need to smoke or puff with significantly fewer health risks. Despite this general observation, there is still a significant question that needs to be answered: Are e-cigarettes good or bad? The answer lies somewhere in the middle.

E-cigarettes are certainly not without side effects which is why today we are going to tackle some of the health aspects that support claims regarding e-cigarette benefits and e-cigarette downsides. The fact that this is still a relatively new product on the market means that medical researchers are always testing new medical theories in order to gauge the effects of these vaping products. Current results are a great starting discussion topic, to say the least, which is why we will be focusing on trying to detail the pros and cons of using e-cigarettes.

E-Cigarettes and Their Benefits

When we try to find information online, we are often hit with an array of responses. Usually, that would be a good thing, allowing us to see how different people refer to certain products or situations. Despite this, one place where we do not want to have a host of opinions guiding our beliefs is when we speak of health. This is why today we will be using a reliable source to help us get through the positives and the negatives, namely the Harvard Medical School health blog, specifically its entry on e-cigarette use.

Here, John Ross, a reliable contributing editor of the blog, speaks at length about the positive aspects of using e-cigarettes. These positive aspects appear when e-cigarette use is compared to traditional cigarette use. Statistics show that around half a million people die yearly from related diseases caused by cigarette smoke. Smoking, due to the disease that it is linked to, becomes one of the biggest forms of preventable death in the United States. Firsthand and second-hand smoke have been linked to causing lung diseases, leading to asthma, and other health concerns.

E-cigarettes have been shown to be better alternatives for long term smokers who also have some mild or moderate form of asthma and vape smoke is considerably better than regular combustible cigarette smoke due to the fact that it does not release the same levels of toxic materials in the aerosol. E-flavoring liquids in e-cigarettes are made out of propylene glycol and glycerol, which means that they are considerably safer than their combustible alternatives, which contain tobacco and other toxins that are added during the manufacturing process in order to treat and change the flavor and feel of the smoking experience.

With conflicting studies being published on the benefits in quit rates for e-cigarette smokers, such as this one, the benefits can be arguable and subjective from one individual to the next. So, the benefit here is that e-cigarettes can easily be used by long-term smokers in order to substitute regular cigarettes, with significantly lower carcinogenic and toxins to be found in the smoke that they inhale and exhale. Therefore, the problem with second-hand smoke inhalation does not relate to vape smoke.

E-Cigarettes and Their Downsides

If the benefits of vape products are best described by referring to their attempts at aiding addicts, the disadvantages of using e-cigarettes are considerably more defined and explored by medical researchers. In this case, the scales seem to tip more in the direction of the downsides which does not bode especially well for the e-cigarette industry, for reasons that we will explain right away.

For starters, one of the biggest problems with vaping products is that they’re ‘safe’ lie appearance make them incredibly attractive towards children. The problem here is that studies show that vaping can become a gateway to new addictions. This happens because the e-liquids used almost always contain nicotine, which is known to become an addictive substance. The dangers with adolescents and vaping are that nicotine has also been documented to factor in at the prefrontal level. Basically, adolescents have bodies that are constantly evolving, and their brains are also growing and maturing, at a neuronal level, and nicotine can impair that growth process.

Not only that, but prolonged nicotine exposure has been seen in medical research to be a possible cause for type 2 diabetes and insulin resistance in the body. As we have previously mentioned, e-liquids are made from propylene glycol and glycerol with added nicotine, depending on the product. Recent studies have shown that e-liquid smoke does contain a compound called diacetyl, which medical research has deemed to be a leading cause for bronchiolitis obliterans, a dangerous lung disease that affects the bronchioles, the smallest airways in the lungs. Bronchioles terminate into clusters of air sacs, which are at the level in the body where oxygen enters the bloodstream, and carbon dioxide is eliminated. Therefore, this disease attacks one of the most critical parts of the respiratory system.

Recent research does seem to point that e-cigarettes may cause more harm to the body as particles, chemicals, and compounds found in vape smoke can lead to dangerous diseases. However, more research is still underway, meant to analyze all of these problems and more, which does indicate that in the future we will have access to a more in-depth map of just what e-cigarettes do in the human body. No user should use e-cigarettes unless they are doing so to quit smoking and they should have a game plan to reduce the nicotine content gradually with the goal to quit vaping too.