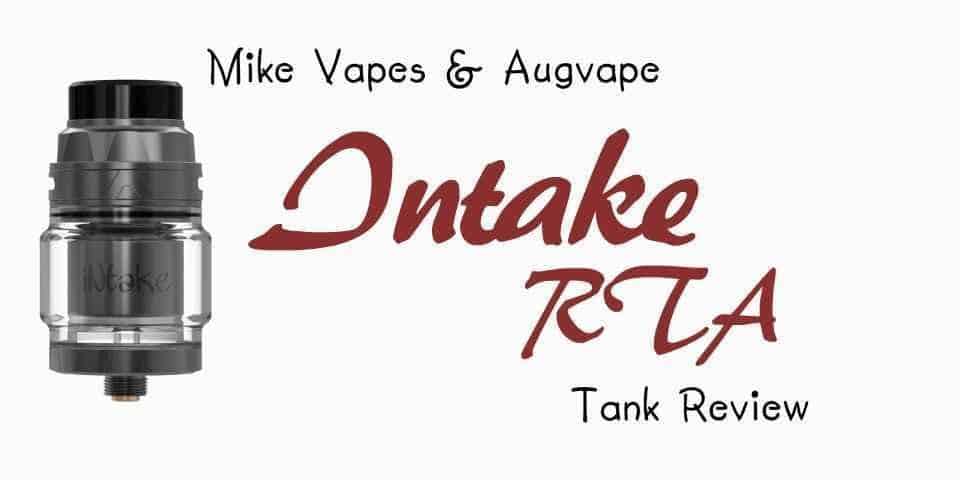 Mike Vapes is a well known in the vaping community for his reviews on vape devices, and he and WOTOFO released the Recurve RDA a couple of months ago, which was a great RDA, especially for squonk mods. Now Mike has teamed up with Augvape to design and now produce the new single coil Intake RTA tank, so the question is, has this team produced the best RTA on the market, or is it just a promotion stunt? We take a closer look at the Augvape Intake RTA to see.

The first thing you notice with the Augvape Intake RTA is the low profile drip tip, which we love, many of the vaping companies have tried this before and failed, due to the drip tip transferring too much heat. But I guess we’ll see how this gets on in our Performance test later on.

It does come with a bubble glass preinstalled that can hold 4.2ml of juice, it’s understandable why Augvape and many other manufacturers make this bubble glass this way, to squeeze another 1-2ml of capacity, but it does mean the edges of the tank are more exposed and thus, if you drop it, it is more likely to crack or smash. That said the Augvape Intake RTA does come with a spare glass tube, should this happen, but it is straight glass and not the bubble design.

Another striking design feature is the airflow being placed at the top of the tank, with exhaust like pipes circulating it to the base of the coil. This is great to avoid leaking, after all, 9 out of 10 tanks that leak, do so from the air flow holes, so this should eliminate that. The reason manufacturer’s place the airflow at the bottom is to get is as close to the coil as possible to generate the most flavor. So again we will see in the performance if the exhaust/chimney system does its job in transferring the airflow directly on the coil to produce a good flavor.

As we see in most tanks these days, the Augvape Intake RTA is top fill, with a nice machined top fill cap that’s pretty easy to hold and unscrew when you need to fill the tank, well it’s actually a locking mechanism that needs half a turn to unlock and lock, so no threads to worry about. It’s also nice to see 2 large holes to refill, so many other brands just have one hole, making it hard for the air to escape and thus creating a horrible puddle of juice all around your tank! Not with the Augvape Intake RTA though!

Measuring in at 50.5mm tall which includes the drip tip and 510 thread with a 24mm diameter, this tank is perfectly sized and should fit and look good on any of the best vape mods out there.

Looking at the deck it seems that the build may be a little more difficult with the 2 large air exhaust or chimney pipes sticking up either side, but Augvape and Mike have thought about this and introduced 2 large screw heads making it a whole lot less fiddly!

One other great design feature on the deck is the holes where your coil fits are actually not holes, they have machined away the sides, meaning you can just slide the coil ends in from the sides without having to thread them. This makes building on this deck extremely easy and thanks to the huge screws, it’s even easier.

We love how these airflow channels, chimneys, exhausts or whatever you want to call them are looking, it actually directs the airflow underneath the coil to the very base, which you can see when you build on the deck.

Once you’ve screwed your coil in place, threaded your cotton and poked the ends of the cotton in the 2 grooves at either end of the deck, you’re pretty much ready! Just don’t forget to soak that cotton up before reassembling the tank!

So now it’s time to really test this tank. We all know that single coils are probably the best setups for max flavor, so let’s see how the Augvape Intake RTA performs.

Let’s start; we’re using a 5 wrapped coil, at 0.7 ohms with 35-Watts and the airflow wide open. The first thing that strikes us is the slight resistance in airflow; it’s not as airy as other tanks and due to these chimneys directing the airflow to the base of the coil. It’s not a bad thing for us as we usually vape with the airflow half open, but on the Augvape Intake RTA, it needs to be fully open. We’re guessing vapers who like a lot of air-flow may be a little disappointed.

The flavor, however, is certainly coming through, it’s actually really good, and this is the positive side of the design.

The design of the tank in general works really well, and the low profile drip tip is not getting hot even after continual use, probably thanks to the amount of metal distributing the heat at the top of the tank.

Overall the Augvape Intake RTA tank is one of the best single coil tanks to produce the best flavor from your juice, if you’re a vaper who likes over the top airflow then you may find this tank hard to get used to thanks to its slight resistance on that matter. But for us, with the air flow wide open, it produces just about the right amount.

The deck is relatively easy to build on, probably not ideal for new vapers looking at ecigs to quit smoking, but with a nice 4.2ml of capacity, it’s definitely up there with the best RTAs on the market.