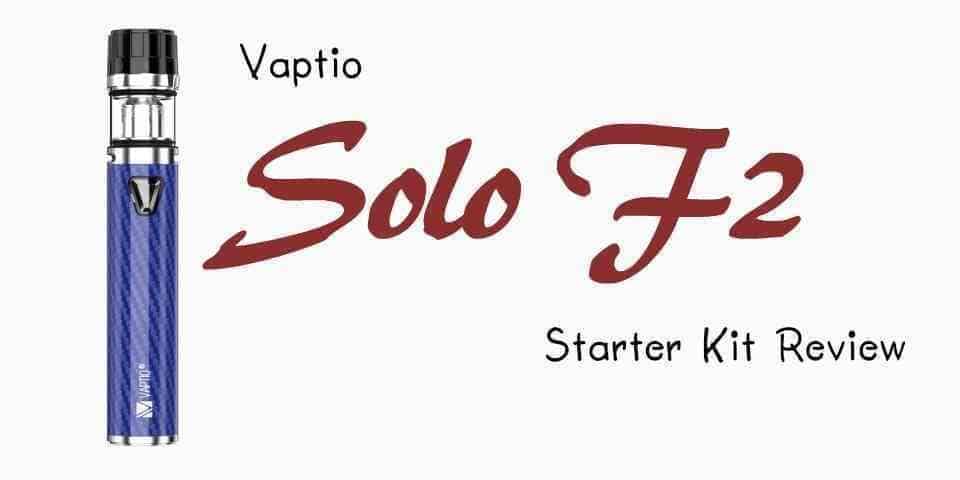 With vape pens becoming a common device in any vapors cupboard Vaptio has released a new vape pen with all the potential of becoming one of the best vape pens on the market. But does the Vaptio Solo F2 Starter Kit meet all the requirements we need? Let’s take a closer look to see.

Based on the typical vape pen design the Solo F2 looks no different, except the actual size. With an internal 2200mAh battery, this pen is small with a diameter of 22mm and a total length of just over 127mm.

The look of the Vaptio Solo F2 is actually quite nice, with a carbon fiber looking shaft and a triangular looking fire button that’s easy to find and feel for.

Vaptio is releasing the Solo F2 in a number of different colors for the initial launch, including black, grey, red and blue and also pink.

The internal 2200mAh battery produces a wattage of up to 50W, or 4.2 volts, making it a pretty strong vape pen. That said we disappointed to see a non-adjustable airflow and built-in tank. Granted, it’s a little different to have a built-in tank and makes the design look slick, but do not have an adjustable airflow is just criminal! Not what we usually see on all the other top e-cigarettes.

The built-in tank is top refillable, just unscrew the top cap and you’re presented with 2 fill holes, both have an additional silicon washer attached underneath to avoid any liquid spills, although this can be removed if you find it too hard to fill.

The Vaptio Solo F2, on the other hand, is really easy to use, just 5 clicks on and off, that’s it. Just fill the tank with juice and you’re ready to start vaping! The fire button is surrounded by an LED light indicating the battery level;

It also comes with an extra drip tip which is held in place by magnets and meant to provide extra protection when carrying around with you.

The kit comes with 2 atomizers, both are the Frogman X2 0.25 coils, you also get a spare glass tube and the USB cable to charge the device.

As the airflow is not adjustable and the kit comes with 2 coils, which are both the same so, we are stuck with one test!

We are experiencing some slight e-liquid leakage through the normal drip tip, but it can be eliminated at least to some degree, by using the additional magnetic drip tip cover.

The actual vape is nothing too spectacular, with e-liquids that have a subtle taste, the flavor struggles to get through, yet the stronger tasting juices are somewhat muted.

The Vaptio Solo F2 is a simple to use and good looking vape pen, ideal for first-time users who have no experience of vaping, or those smokers out there looking at e-cigs to quit smoking with. If you’ve vaped before though you may be left a little disappointed.

There’s no airflow control, you’re stuck with it fully open, the tank is built into the base, so you can’t try other tanks on the device and we experienced slight leaking from the mouthpiece, although this was eliminated by using the additional mouthpiece cover.

Overall, an average, at best vape pen, not one we would rush out and buy, but really easy to use for a first time vaper.