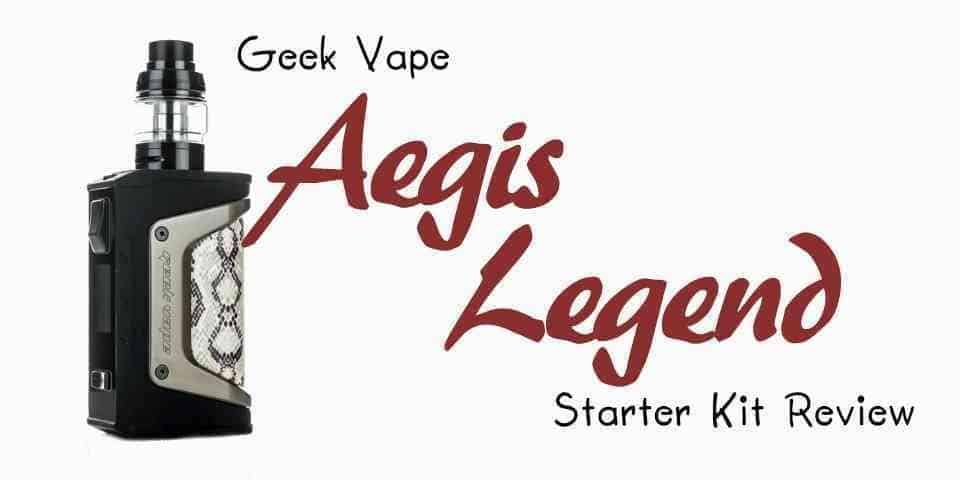 Geek Vape initially created the Aegis original kit as a single 26650 battery mod which was supposed to be indestructible, well to a certain degree. We all saw reviewers testing it out by throwing it into swimming pools, running over it in their cars etc. And it proved to be a hit with the public too, one of Geek Vapes best-selling box mods. The only criticisms it saw was the battery performance.

So now Geek Vape has taken these comments on board and released a dual 18650 battery version, named the Aegis Legend. Let’s now see if the new mod lives up to its name and becomes a Legend in its own right!

The Geek Vape Aegis Legend is using all the previous design ideas from the original Aegis whilst maintaining its water and shock resistant specs, but as Geek Vape state, it’s not quite as strong as the original. Compared to the original Aegis, it is a lot wider to house the dual batteries.

The mod itself measures in at 90mm tall, with another 45mm to add if you include the tank, 58.5mm wide and 30mm in depth so they’ve done a pretty good job keeping it small and is almost the same as any other regular dual battery mod, but is a little fatter.

The styling on the Aegis Legend is really nice, as it was on the original, we love the feel of the device with silicon rubber, plastic, and fabric, although it’s been obviously designed to resist force, it still looks the part!

The flat side of the mod is where the screen is housed with a large protruding fire button above which is easy to find when feeling for it, below the screen are the smaller up and down buttons. The top of the mod is where you’ll find the 510 spring loaded thread, pretty much in the middle giving a nice balance when the tank is on, and to the side of the thread is a rubber stopper, beneath which you’ll find your USB port for firmware updates.

The base of the mod has a clip to remove your batteries and although this is a waterproof mod, Geek Vape has cleverly designed some one-way silicone valves to produce battery ventilation, the holes of which can be seen in the battery door.

Geek Vape is using the familiar controls on the Aegis Legend which include the 5 click on and off function, and 3 button clicks to enter the menu area.

When in the menu area you can select power mode with the up and down buttons, i.e. wattage or temperature control with Nickel, Stainless Steel, and titanium along with TCR and custom power curves should you wish a custom firing wattage for the time you fire the device. It also has bypass mode within the power settings so you can use it as an unregulated mod but still have all the safety features you expect.

You can also lock the coil and reset the puff counter, and if you’re in temperature control mode, adjust the wattage, by selecting the fire button instead of the up and down buttons whilst in the power mode settings.

The Aegis Legend does have a couple of other menu settings. If you hold the up and down button together, you can lock the wattage at the current state.  If you hold the fire button along with either the up and down button you can increase or decrease the brightness of the screen. If you press all 3 buttons together you enter stealth mode, essentially turning the screen off but still, the mod is operational.

One last feature is the ability to change the screen color, if you enter the menu area with 3 clicks of the fire button then press both up and down button together you can scroll between 3 colors, blue, red and default.

The screen displays all the regular information you see on mods, the current wattage or temperature, the resistance of the coil, voltage when firing, amps and a puff counter along with 2 battery indicators for each battery.

All in all the features are pretty standard and can be seen of all the best e-cigarette products, but at least they haven’t forgotten anything.

The Aero tank has been around for a little while, but now they have included the Mesh coils improving this tank considerably. Before it was an ok tank, but now the flavors are really very good.

It is a top fill device which you unscrew (slightly) from the top showing 2 fill holes which we like, one to allow the air to escape so you can fill the tank fast! It also has 2 rather large adjustable air holes on the base, giving a nice flow rate through the tank.

Using the pre-installed mesh 0.15ohm coil initially with 30W of power, which is the bottom end of wattage scale for this coil produces a fair bit of vapor considering although the flavor is really struggling to be found! Ranking it up to 50 Watts still produces a smooth vape and the flavor is starting to come through.

We found vaping at around 70 Watts is the sweet spot, producing a great smooth vape cloud with a great flavor. Work your way up to this wattage though to allow a good saturation of juice on the coil.

In temperature control mode, we did notice it’s a little on the cool side in comparison to other mods, not by much, maybe 10 degrees. It all seems to be working, preventing any dry hits when vaping the tank dry, so nothing but thumbs up.

The build quality of the Geek Vape Aegis Legend is really outstanding, with all the waterproof and shockproof specifications it has. Really easy to use and the Aero Mesh tank produces some really good flavors, at least with the mesh coils.

Overall, if you don’t mind a slightly bigger mod kit, but want the durable and toughness the Legend provides, we think you’ll be really happy with the performance.