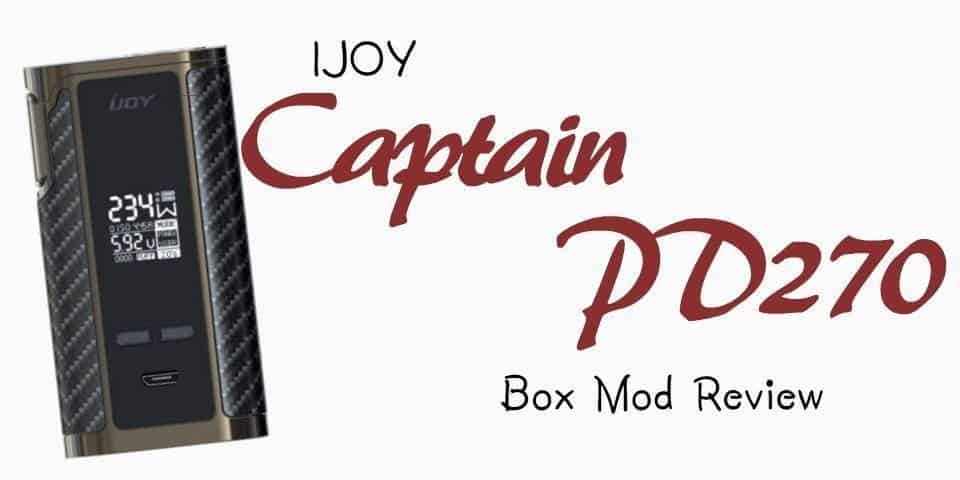 What do you get when you combine a sleek and luxurious-looking mod body with state-of-the-art 20700 batteries, the latest in high-tech features, and a reliable company name with a proven track record of vaping product success? The answer’s obvious: the IJOY Captain PD270 Box Mod, of course. This latest offering from one of vaping’s most trusted names aims to be the next big thing in vaping enjoyment and aims to top the list of all the best box mods out there. In this IJOY Captain PD270 Box Mod review, we’ll delve into its finer points and see whether it actually has a real chance of meeting that goal.

So, what’s so special about this mod, anyway? Well, let’s begin with the exterior. In comparing this device’s appearance to a lot of other box mods out on the market today, one thing really stands out: this thing’s exterior is just gorgeous. It has sleek, rounded edges, and elegant accents that help to ensure that you’ll forget all about its box-like shape once you get used to having it around. The display screen is large, with bright white display information to help you monitor settings and performance. Even the firing button gets in one that act, with a well-designed button that offers that high-tech look that’s so popular these days.

Of course, aesthetics can only take you so far; it’s what’s under the hood that really matters. In this case, those internal goodies include a mod that can use dual 20700 batteries – which some belief might be the vaping battery of the future.

It’s an oversized battery that offers 3000 mAh and sustained 40 A. In other words, they’re powerhouse energy sources that should provide vapers with all the power they need to meet their vaping demands. IJoy apparently understands that some people are resistant to change, however, since the company includes an adapter that can enable you to continue to use those old 18650 batteries if you so choose.

As nice as the battery options are, the mod’s chip is really something to crow about. It’s the new IWEPAL chip, and it can be controlled and managed using the OLED display and buttons. From that OLED, you can monitor or alter important settings like TC, TCR. and Power modes, wattage, resistance, and amps. You can also monitor battery life and keep track of your draw count. In short, you can use that display to maximize the chip’s regulation of just about every important aspect of your mod’s behavior.

This is a moderately-sized mod as well – which actually surprised us since we expected that the larger batteries would require a larger chassis to house them. Everything’s designed for maximum compactness, however, making this a decidedly portable device that you should feel comfortable using just about anywhere.

Performance is really where mods really separate themselves from their competitors, however – so we were only too eager to leap in headfirst to try this new tech wonder. We found that its 30mm compatibility features made it a perfect fit for a variety of different tanks, so we had a blast experimenting with some of our favorites. And, of course, we ran the thing through its paces, testing the different TC features to see which settings produced the best results for everyone in our test group.

You do have to remember that this type of mod is designed for people who have already tried vaping and want more vape flavor, bigger clouds, and an overall better performance. If your new to vaping then the Mig21 Clear Fusion e-cig might be a better option or one of the best cigalikes, this mod may be a little too powerful for you to start with!

Overall, the consensus seems to be that this is a solid, reliable mod that provided all the sustained power we needed to blow big clouds of vapor while maximizing the taste results we enjoyed from each vaping session. In our tests, we also discovered that the sustained 40 A claim is real. As I said, this device is very reliable and seems to be everything that we’d heard it would be.

Before we give you our recommendation, though, there’s another area of aesthetics that we should discuss. If you’re someone who has troubles picking out which shirts to wear, then you might want to have a friend help you select your mod. Why? Well, IJoy is offering this mod in no less than 54 separate combinations of color options. Some might find that to be overkill in the choice department, but there’s something comforting about knowing that a company cares that much about meeting your specific needs.

So, what’s the verdict? Well, the Captain is truly a little powerhouse mod that lives up to expectations. The batteries are powerful and the mod’s onboard tech ensures that every feature is precisely regulated for maximum effect. Given that the device sells for less than $100 online, we expect it to be a popular choice for vapers everywhere – and for good reason, as it use to be one of the best e-cigarettes in its class, find out which are the top vapes now. If you’re looking for a new mod, the IJOY Captain PD270 Box Mod is certainly one option that you can’t afford to ignore.