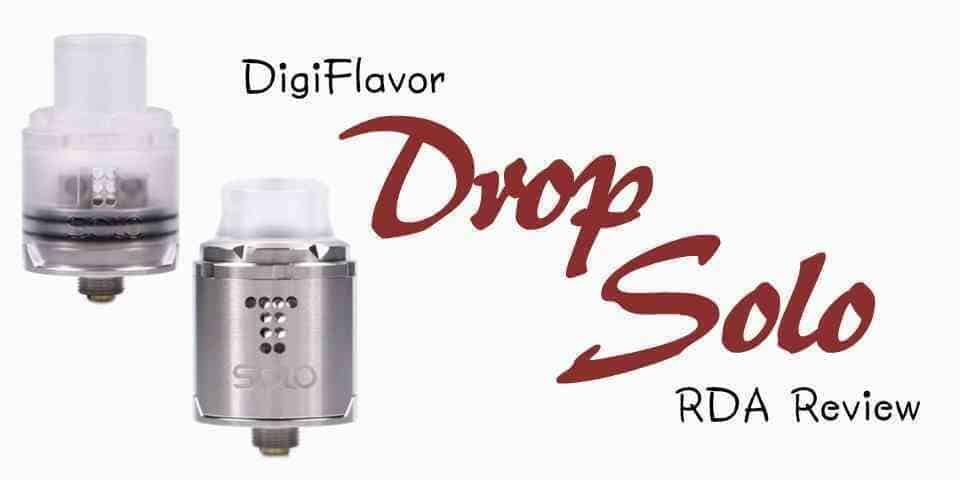 Digiflavor had reasonable success with their new Drop RDA tank, but they wanted to produce an RDA which excels in flavor, so they ditched one of the coils and released a new single coil RDA named the Drop Solo. Has this improved anything and is the Digiflavor Drop Solo the best RDA on the market? Only one way to find out! Let’s give it a test!

The tank is a little on the small side, measuring in at 22mm diameter, and 24mm tall without the drip tip so should fit on pretty much all the best vape mods. They also include, what they call a beauty ring, for the base which increases the diameter (of the base at least), to 24mm, which does improve the look of the RDA on the mod, but also keep a lot of the heat away from the top of the mod.

Digiflavor are also releasing the Drop Solo in a 3 colors which include; Stainless Steel, Black, and Gold, there’s no word if they will be releasing further colors in the future, but they may release some special editions from time to time depending on the success.

The base has a gold plated 510 pin, which can be taken out and replaced with the BF squonk pin which also comes in the kit, so those who love squonkers are covered.

The sides are where the airflow holes are found, a total of 10 each side and can be easily reduced, one hole at a time, by twisting the top cap. The air holes will be the same on each side, so if you choose 6 holes on one side, the other side will also have 6 holes! We did notice that the plastic spare tank only has six holes either side.

Digiflavor has been clever with the design, so after building your coil, there’s only one way to put it back together which means the air holes will always be central to the coil and in the correct place.

You also get 2 810 drip tips, each with a slightly different design, but you can also use other 810 drip tips if you prefer, or even use the included 510 drip tip adaptor for an even greater selection!

The first things you notice with the Drop Solo deck is how high the coil posts are, making it a lot easier to build on. It also has a real deep drip well of 5mm, so it holds quite a lot of e-liquid in comparison to other RDAs.

The two posts hold the coil with a tiny screw in each, using the supplied screwdriver you can put your coil in place. You then have the bend the coil over so it lines up with the center of the deck. This can take a couple of tries to start with, but once you know how long the legs of the coil need to be, it’s pretty easy after.

It doesn’t matter how you put the legs of the coil in the posts as long as one is in each, so you can experiment a little to see which best suits, some vapers prefer using one leg going in the top and the other coming from the bottom, this prevents having to move the coil and easier to line up initially, but it’s up to you. You can even experiment with dual staggered coils, but just be careful with the cotton to allow a good circulation of airflow, your space will be reduced obviously, and air flow brings out the flavor!

So we’re using a traditional single coil build with a stainless steel 0.28ohm coil with 45 Watts of power set on our mod.

The first thing that hits you is the flavor, it’s just amazing, single coils are known for producing a better flavor, but with the high coil deck and the controlled air flow on the Drop Solo, it seems that Digiflavor has maximized the flavor with this design.

Of course, you still get a good quantity of cloud production, which is smooth, so no issues there. We noticed if you’re addicted to vaping and vape a lot, the metal cap can get a bit hot, so another plus goes to Digiflavor for including a plastic cap!

Digiflavor teamed up with Brian from Vapor Chronicles to produce one of the best tasting single coil RDA/Squonk RDA tanks on the market, well suited as a companion to all the best-vaping devices. Such great flavor, with a nice deep drip well there’s really not much to complain about.

The deck is easy to build on, with different options to experiment with, and with options to change the mid and top cap to plastic versions, Digiflavor seems to have put great thought in the Drop Solo.

Overall a great single coil RDA which we have no problem in recommending.