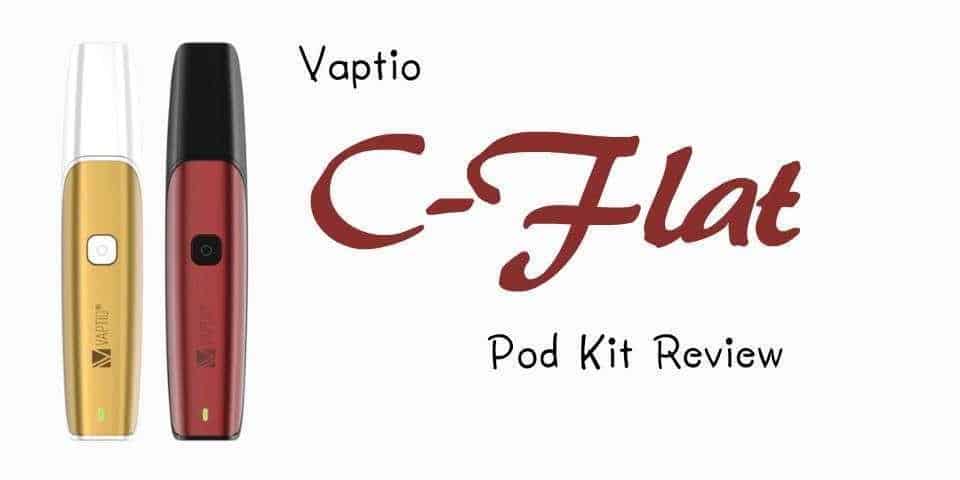 Vaptio is becoming a recognized vape brand and now they are releasing a pod pen to rival the Juul. The C Flat is Vaptio’s attempt at creating their first all in one pod system e-cig, with a built-in 350mAh battery and simple 1.5ml replacement pods. But how good is this new pod pen? Let’s take a closer look to see!

The design of the C-Flat is a little different than the other traditional pod pens and rather larger too. Measuring in at 120.5mm tall, 15mm wide and a diameter of 25mm, but with this increased size comes a slightly larger battery consumption of 350mAh.

There are 3 parts to the C-Flat pen, which all just click together; the mod body holding the battery and where the fire button is located, the pods where the e-liquid is held and the drip tip. It’s all been designed to make it as simple as possible for the vaper to use, and it really is that simple.

Vaptio is initially releasing 3 colors; Champagne gold and white, red and black and also just an all-black version. Time will tell if they decide to release further colors, but the initial 3 should meet most people’s need. Even the best electronic cigarette products are only initially released in a few colors, so time will tell if they release more.

This is where Vaptio has really used their heads and put something on the market that, in our opinion, is a great idea. Instead of having to buy pre-filled pods, the C-Flat pods are actually empty, and you fill them with the juice of your choice, opening up the choice of flavors to all those eliquid companies out there.

The company is actually calling their pods the tank, but who are we to argue, it’s made of plastic and resembles a pod, they also call their product a pod kit, so the tank is the pod! After all, you can’t have a pod system without a pod!

The empty pods have the capacity of 1.5ml of juice, although this doesn’t sound like much in comparison to other vape pens or tanks, because of the lower output of 15W (compared with up to 250W) the juice lasts a long time, not only making it more convenient but also a lot cheaper on having to replenish your eliquid stocks like the big cloud chasers have to do!

Vaptio also have their own prefilled pods, so if you prefer the ease of just replacing the whole pod, then no problem!

Now being vapers for many years, we prefer direct to lung vaping as opposed to mouth to lung vaping, but the C-Flat states that it supports both, simply by flipping the device 180 degrees! We not really sure if we noticed much difference turning the device back and forth, perhaps a little resistance in the airflow, but its marginal. The vapor produced is certainly the same, so we wouldn’t worry too much about having it the right way round!

Let’s get on with the vaping! We use a 70/30 juice which is the most popular, and a little thicker than regular 50/50 juice due to the higher VG content.

We were concerned that this thicker juice may create a wicking problem with the coils, but no, vaping it continually produced no dry hits whatsoever.

The flavor produced from the Vaptio C-FLAT Pod Pen is actually pretty good, it’s not as good as some of the best sub ohm tanks you see on the market, but considering the pen is only using 15W of power, the amount of tasty vapor is really good. So does this perform as well as some of the best pod vapes on the market? Well, yes, it’s right up there on performance.

We were actually pretty impressed with the Vaptio C-FLAT Pod Pen, the power is really low but the vapor is really good.

There are a couple of things to consider when buying the C-Flat, first there is no battery indicator. The only way of realizing it needs a charge is the decrease of vapor volume. Also, unlike other pod pens on the market, it has no automatic fire; you have to physically press a button while inhaling. This, of course, is not a problem for current vapors as the majority of other vape pens and mods are all button activated. Also be sure to keep an eye out on your juice levels, if it gets too low you can end up ruining the coil, leaving a burnt taste in the pod.

Overall the performance and ease of use for the Vaptio C-FLAT Pod Pen are really good, it’s great to see the pods are refillable and with only 15W of power drawing from a 350mAh battery this pen should last all day even with the heavy vapers.

Vaptio has certainly designed a vape pod that will help people who turn to vaping to quit smoking with ease.