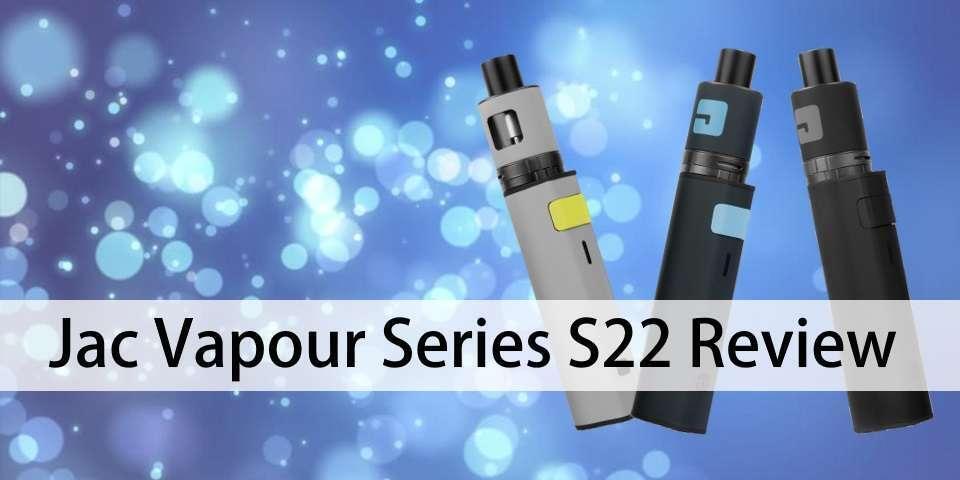 Jac Vapour is one of the leading brands of e-cigarettes within the UK, and only last year they released the Series S17 vape pen. Now they have released an upgraded version known as the Series S22. We’re going to take a closer look at their new model, to find out what the improvements are and whether its worthwhile getting.

You can tell straight out of the packaging that the Series S22 is an upgrade as the shape is slightly different and boarding onto the look of a box mod. It's shaped like a regular vape pen with a slight difference, that is, it utilizes the cylindrical shape with a slight extracted cuboid side producing a teardrop-like design. The advantage of this shape is actually quite encouraging, not only does it stop the problem of your vape pen rolling off your desk but, as they have the fire button placed on this flat side, it's super easy to find and activate!

Jac Vapour is releasing the S22 kit initially in grey, but they also have additional battery packs colors available in black, green and navy. So expect these colors to also be released in kit form shortly.

Measuring in at just 125mm tall (including the tank) and 27mm wide at the widest point, you're not going to have an issue with carrying this vape pen around with you. It is small so does this affect performance? Well, we'll come onto that shortly!

The Jac Vapour Series S22 is super simple to use, with just one button, one USB port, and a simple top fill tank. The device uses the 5 clicks on and off feature and that's pretty much it as far as operation is concerned!

We have stated that the S22 is small, but we were really surprised they managed to squeeze a 2600mAh battery inside. This is great as the vape pen uses between 4.2-3.1 Volts (unregulated, meaning it will slowly draining with use), with relatively low power, this battery size should last pretty much all day, even with regular vapers.

Although it has unregulated voltage, so you can't adjust the wattage to suit, like the FreeMax Twister for example, it doesn't mean it's not safe. Jac Vapour includes the following safety features within the S22:

The S22 also supports pass-through charging, which basically means you can charge the device and use it at the same time.

Jac Vapour include the S22 tank within the kit, and this part of the device enhances or ruins the total impression of the device, so it's important they get it right. So what enhancements can we see on the S22. Well to be honest, not really that much! The tank now supports a top fill feature which means you don't have to remove the tank to refill. Simply unscrew the drip tip and fill making sure not to poor e-liquid down the chimney.

It's a bit of a shame they're using there own custom drip tips (mouthpieces), so if it breaks, you have to get a replacement from Jac Vapour.

It is good to see an adjustable airflow on the base of the tank, but the holes seem relatively small, so we'll have to see how that affects performance.

Also, another nice feature is the ability to interchange the coils from supplied 1.0ohm coil designed for mouth to lung inhales that is similar to smoking a cigarette and the 0.5ohm coil for the more advanced direct lung inhale vapers.

Now we are into the interesting part of the review, how does the Series S22 actually perform and is a great option for a new user? Make no mistake with this vape pen, it is prominently designed for relatively new users, so if your an experienced vaper, don't expect it to compete with more powerful devices you might be used to.

With that said, we are still pleasantly surprised with its performance!

First, we decided to switch the coil and use their Turbo S-Coil - 0.42ohm coil. This suits direct lung inhales and is the best way to monitor the taste of the vape. We're also using their blackcurrant squash e-liquid which is 70/30 VG/PG juice.

With this coil, you have to have the airflow wide open, there is a slight resistance in the draw, but nothing really significant to ruin the vape. It produces a nice heavy cloud of vapor that, we pleased to say, is packed with flavor. Very happy so far.

Vaping for most of the day, we're also pleased to report that the flavor is pretty constant and the battery life is just great. You can tell at the end of the day the slight drop in voltage, but that's expected.

Moving on to the mouth to lung vape, we obviously need to switch the coil with the supplied 1.0ohm coil. Using the same e-liquid and adjusting the airflow, we also found the taste to be really good along with a nice smooth vape.

Overall, we were simply impressed with the performance of the Series S22 from Jac Vapour. It certainly doesn't produce the same vape quality as the best vape mods but in comparison to other similar-sized vape pens, it certainly competes well.

The Jac Vapour Series S22 is a newly upgraded vape pen from one of the UK's best manufacturers. The S22 features a simple to use, one button battery and an easy to use top-fill tank. The performance is not on par with the best and more powerful vape pens on the market, but for its size and price, it still competes pretty well.

Overall a great performing vape pen that we would recommend for new users and vapers wanting a little more power than the pod vapes and cig-a-like type e-cigarettes.