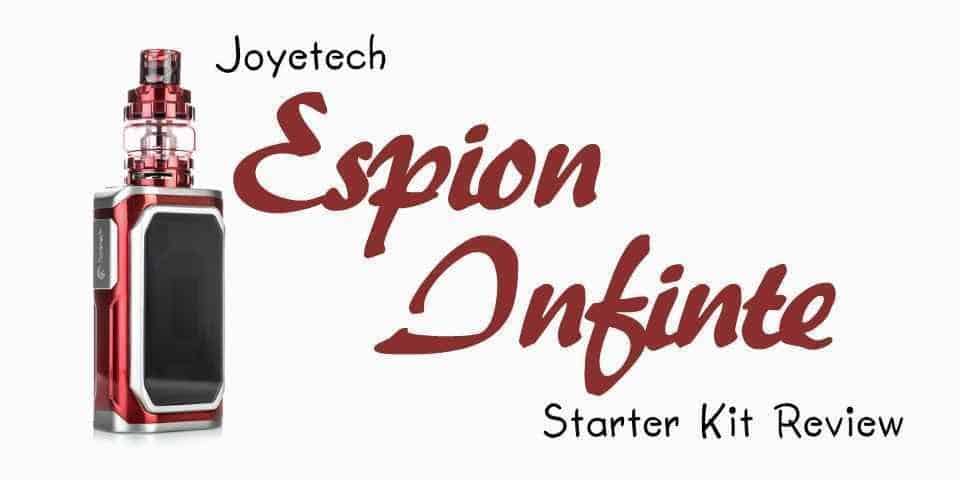 The Joyetech Espion Infinite is a new dual 21700 battery mod which can also use dual 18650 batteries, able to reach a maximum output of 230 Watts. With a cool light display reacting to different actions, what’s so different about this vape mod and can it compete with the best box mods on the market? Well, let’s take a look to see!

The first thing you notice is the lights! It has two tunnel full-color light effects around the 0.96-inch color display that reacts differently depending on what you’re doing with the mod. If you’re not a fan of the presets, you can adjust them in the menu screen or even turn them off if you wish. Apart from the lights, the design is like a bigger brother to the Joyetech Espion Solo, which is obvious thanks to its name!

Measuring in at just over 140mm tall with the tank, 49.5mm wide and 33mm wide it’s a pretty big size mod which is being released in a number of colors including red, blue, gold, green, black and dazzling or rainbow as we better know it!

The fire button can be found on the side, taking up approximately half of the length, which is easy to find and very responsive. The up and down buttons are located on the top of the mod right next to the tank thread, which is located in the center so has a good balance when vaping. On the back is the USB port to perform firmware updates or recharge the batteries. The bottom of the mod has the door to get to the batteries, you can open this by sliding to one side and opening with the spring loaded hinges. You will also find a few venting holes on the door should your batteries need them.

Joyetech has been a leader in manufacturing some of the best electronic cigarette products in the world, and their experience shows in this mod kit, the quality is truly outstanding.

The Espion Infinite mod is using the 3 button clicks of the fire button to enter the menu area, here you can enter the mode, settings, and LED menus. Within the mode menu, you can adjust it from power or wattage mode to temperature control mode. Each time you use the up and down buttons on top of the mod to move the cursor or adjust the settings and the fire button to confirm.

In the settings menu, you can lock the coil resistance, this means that when you find your ideal wattage and need to remove the tank, it won’t adjust the resistance of the coil and thus adjusting the output. You can also adjust the power of the mod, enter stealth mode (where no lights are shown during vaping) and adjust or reset your additional display setting from puff counter, time and current.

Within the LED menu you can custom set the different light displays during different states of the mod, for example, you can set the LEDs to be on when the screen is on when vaping or always. Within these states, you can also set the type of light display like fire,  wheel or spear and set the color.

Without entering the menu area, you can adjust the wattage by simply clicking on either the up and down buttons, you will also notice that the light display spins around the mod indicating the change in progress.

Overall the features are pretty standard, although we found them similar to other mods like the Smok Devilkin for example, but there really isn’t that much to boast about.

The Procore Conquer is a 5.5ml capacity sub ohm tank measuring in at a tad over 55mm tall including screw thread and cap, and 25mm diameter, although this does bulge out a little thanks to the bubble glass they include on this tank.

It does come in the color to match your mod and features the top fill design, by simply sliding the top to one side. The airflow control is at the base with stopping points making it easier to remove to change the coils.

We have the mesh ProCD coils in the tank and have the wattage set to 60W. We get a smooth airflow and you can get a real deep flavor coming from your juice. The airflow is so good on this tank we are actually closing it halfway, which is unheard of!

The ramp up time on the mod seems to be really good with the Procore tank, but if you’re buying the mod with use on an RDA then expect this to be a little slower. The mod has really been designed for sub ohm tanks we believe. Any coil needing over 100Watts may cause some slight performance issues.

That said, it does perform well and could be ideal for people who have used other e-cigs like the Juul Pod System, you are going to get a better vape, but against its close competitors and other mods, it’s not exactly memorable.

The Joyetech Espion Infinite is naturally a big heavy vape mod but that’s because it holds dual 21700 batteries which are of course big! The flavor produced by their ProCD mesh coil is outstanding and you can’t complain about the amount of airflow.

We’re a little disjointed with the dull small screen, less than an inch big, but they have concentrated on the light display around the edges.

Overall though a great vape kit that will keep many vapers happy and if you like light displays on your mod, then this is a must-have!