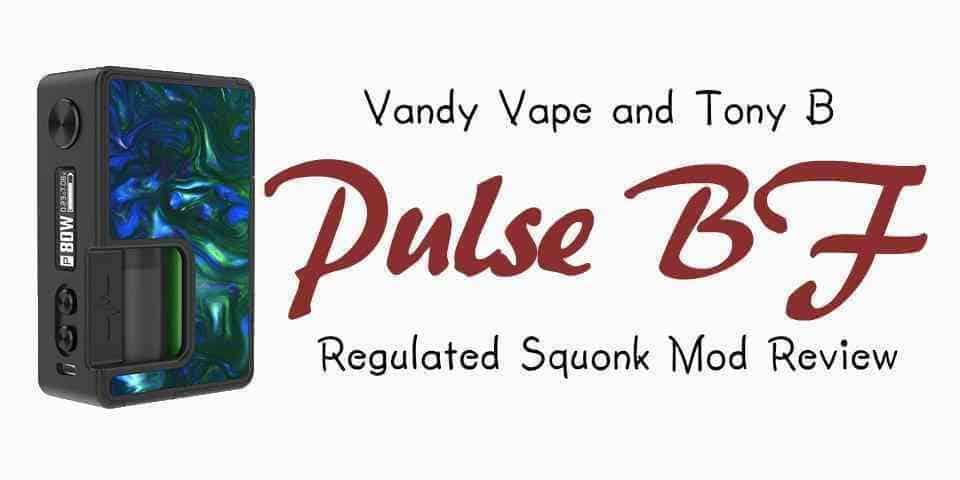 Tony B has teamed up with Vandy Vape to produce a regulated squonk mod that promises to put the vaper first. Tony B is a well known electronic cigarette reviewer on YouTube and is well known for giving detailed reviews, teaming up with Vandy Vape is sure to create the ultimate squonk mod or is it? We know Tony and Vandy Vape had issues with VooPoo about the sourcing of the chipset within the mod, eventually resulting in VooPoo doing the dirty on the team and pulling out only to release their own version.

But Tony B and Vandy Vape went back to the drawing board and decided to design their own chipset, just for this mod. Has this had a huge impact on the final product or is the Pulse BF the best box mod on the market for squonking? Let’s find out.

Quick note, there are 2 versions of this mod kit available, one is classed as standard and the other is classed as high-end, the only difference is the high-end version comes with a 30ml refillable juice bottle.

One thing we love with the Pulse BF is the simple look, taking pretty much the same design as the overly popular original and unregulated Pulse BF. If you’re into your light shows or flashing LED’s then this mod is not going to suit you! It’s a pretty simple design, featuring a nice bright 0.91 inch wide OLED screen with an oversized firing button above and two small up and down buttons below. Below the 2 up and down buttons are where the USB port has been placed.

The sides are empty except for one, which has a recessed window to allow you to squeeze the bottle and feed your coil.

The 510 tank thread is on top placed slightly to one side with an anti-leak function to improve performance.

The sides can be removed thanks to the magnetic contacts with the option to replace with different side designs. Removing the sides also gives you access to the 8ml bottle to refill and of course the 18650 battery.

With the new Vandy Vape chipset, the regulated Pulse BF can achieve up to 80W of power so not one for the higher wattage vapers out there who prefer the warmer vape. But it not only takes the traditional 18650 battery but also the 20700 battery, which gives a little better battery life.

To lock the device you hold the up button and fire button, pressing the down button and fire button flips the screen. If you click all 3 buttons at the same time enters the stealth mode, so effectively turning the display off. Lastly, holding down the up and down buttons enter the presets and custom settings area where you can select the wattage per second the fire button is pressed. Or where you can set the different temperatures depending on which type of vape you want.

Within this settings area, you can also see the version of the software, the chip id and also flick the power mode from wattage to voltage should anyone wish to do so.

All in all the features are pretty much all you can ask for and nothing really missing in comparison to the best electronic cigarettes available and covers all types of vapers.

We were a little skeptical about this device since VooPoo pulled their Gene chip and Vandy Vape decided to use their own, but as it turns out, there was no need to be! The chip works really well and offers all the features that any other chip could offer. The response time is really good upon firing and nothing to complain about. The only real noticeable thing with the chip is that if the mod is left idle for some time (longer than 5 minutes) the response time is a little sluggish for the first time.

Other than that the design is solid, the squonk mechanism works really well, as we expected from their previous model.

In temperature control mode, however, the response was ok but seemed that the temperature was not as accurate as other mods we test. Not a huge concern, but if you have a set coil and temperature you vape at, this mod might require a little adjusting in comparison to the settings on a more accurate mod like the Smok Devilkin for example and that’s with a standard chipset, not a more advanced Yihi or DNA chip!

We vaped it with the WoToFo ReCurve RDA and it was like a marriage made in heaven, everything worked seamlessly with each other and it just felt beautiful to hold and vape on!

The Vandy Vape & Tony B Pulse BF Squonk mod is a great regulated squonker! The menu functions are simple to use considering the number of functions available. The squonk bottle mechanism works really well especially with the newly designed anti-leaking stuff they’ve incorporated.

If you’re looking for a regulated mod, want one with all the features and one with a solid feel and design then the Vandy Vape & Tony B Pulse BF Squonk mod is definitely going to suit.