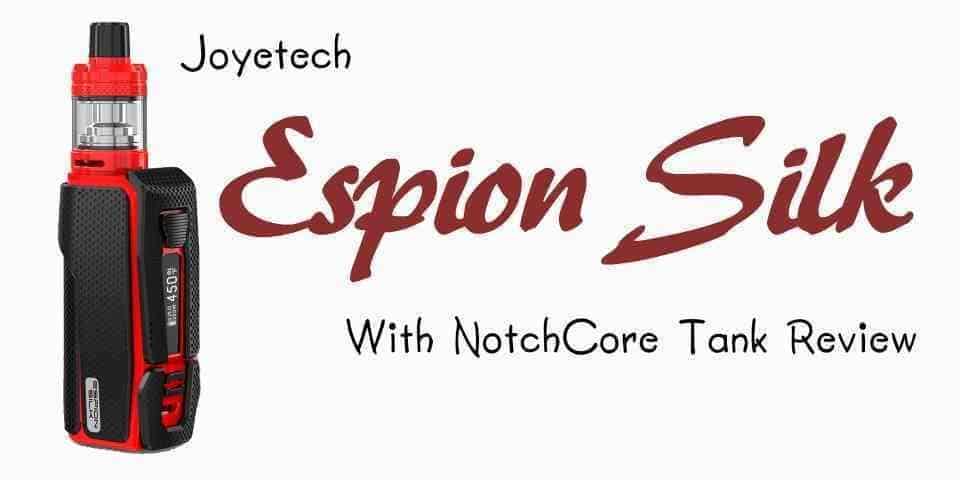 Joyetech is one of the original vape companies and it’s nice to see them still producing some great quality vape mods. This time they are releasing the new Espion Silk kit, with a few design changes in comparison to other mods, a built-in 2800mAh battery, which is huge in comparison to the size of the mod and if you buy the kit version, then you get the NotchCore tank. So how does this mod kit compare with others in its class? Let’s find out!

The look of this mod, is completely different and first impressions will always produce a frown of uncertainty, but when you hold it and feel the quality, you somewhat start to fall in love with the size, feel, and just the general aesthetics.

With the NotchCore tank the whole unit measures in at just 120mm tall, 40mm wide and has a depth of 29.5mm, so it is small, especially considering the built-in battery is 2800mAh! Weighing in at just a smidge over 140grams it’s light too. How did they do that, usually your packing a bit of weight with a kit like this!

The body is constructed with rubber-like segments, which makes it look a bit like a bumper car with bumpers fitted all around it, but this design makes it super non-slip and if you were to drop it, the rubber does absorb the majority of the impact, but as it’s so light, it will be hard to damage the mod itself. The glass tank though will absorb the majority of the damage, as with pretty much every tank on the market.

The fire button has horizontal grooves etched into the plastic, making it super easy to find without looking and although it is plastic, it is well constructed and produces little to no rattle. Below the fire button is the 0.7” OLED screen, and below that are the up and down buttons fitted vertically. There’s also the USB port below the buttons, so you can charge this device when the mod is sitting upright on your desk.

The Joyetech ESPION Silk mod is small, and because of this it only fires up to 80W, but Joyetechs NotchCore tank coils compliment this mod extremely well, and with a power rating around 25W, this mod has plenty of power! But, compared to some of the best electronic cigarettes it produces some really good tasting vapor.

There are a number of modes available including the typical power and temperature control with NI/TI/SS modes, but it also comes with bypass mod, if you want to use this device like a mech mod, but have all the safety features still. To select which mode you want simply click the fire button 3 times and scroll through the options using the up and down button, the fire button is then your select button.

To enter the standard menu you hold the fire button and up button for about 3 seconds. Here you can select between screen display, lock you atomizer resistance, stealth mode etc.

In normal power control mode (variable wattage) the Espion Silk can handle resistances from 0.05-3.5ohm, this is a little reduced in temperature control mode which is between 0.05-1.5ohm. That said, there are not many vapers, if any, who vape above 1.5ohms these days!

The NotchCoil tank is rather unique, well at least the coils are, but we’ll come onto that is a second.

First, the tank holds just 2.5ml of e-liquid, a relatively small amount, but it fits the size of the kit and complies with the TPD in Europe. It is top fill, there is a small arrow on the top of the tank indicating where you push to slide the top open, where you will find the refill hole. Yes, it is only a single hole and pretty small, so care does have to be taken with the air bubbles and spillage.

The tank also has 2 pretty decent sized airflow holes on the base of the tank which are adjustable. But it’s here, at the base, where the things start to get interesting!

When you unscrew the tank to replace or fit the coil, you’ll notice a different design of coils. Usually, you would expect to unscrew a contained coil within an atomizer housing, but with the NotchCore, the coil is open, with cotton threaded through the center, similar to a coil you build for an RDA/RTA but without the feet!

You simply place the coil on the gold plated base, no screwing down, just lay it in place. When you screw the tank together the cotton edges are left exposed for the e-liquid and the coil gets locked into place. Really easy to change and what’s best, the coils are really cheap, so much so that Joytech include 5 free coils with the kit!

We found that vaping at around 30W produces the best vapor and flavor, anything higher than 35 Watts you’re risking the chance of a dry hit, and that does not taste good! We also found reducing the airflow to half also helps the flavor come out more from your juice.

We were really surprised with such a low wattage device, it produces a really good vape.

The vape production is also really good, you’re never going to produce the same amount of vapor as the RDA’s or even the higher wattage sub ohm tank coils, but it’s close and the flavor competes with all the best sub ohm tanks on the market.

The Joytech Espion Silk is an easy to use, light and great producing vapor device. With a huge 2800mAh battery and coils which operate best around 30 Watts, experienced vapers out there will know this mod should last all day, even for the heavier vapers out there.

The tank is particularly impressive and a great companion to the mod. If you’re new to vaping, then this could be a great buy. If you’re more experienced then the lack of power or additional options like what on the SMOK I-Priv Kit for example, so it may be just a little underwhelming, but is still a great lightweight mod to carry around with you.