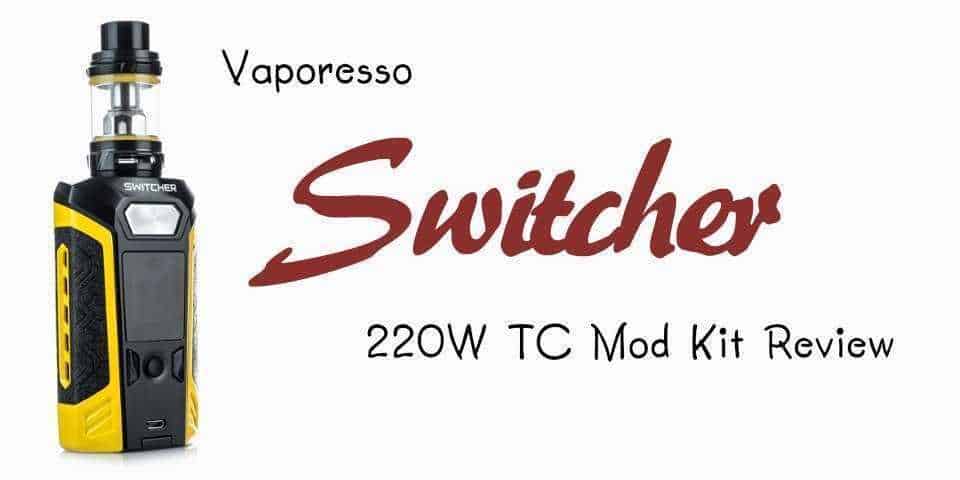 If you’re looking for a different look for your vape mod then Vaporesso have you covered with their new Switcher mod kit. It was originally going to the called the Transformer, but at the last minute before release, they changed it over to the Switcher kit. I guess some trademark issues or something! Nevertheless, let’s take an up-close look at this mod to see what you get, how good it is and whether it’s good value for money against the best vape mods in the market.

The reason behind the Switcher name is that you can actually change the sleeves of this mod changing the complete look of the mod. The kit only comes with one sleeve, but we’re told that you can purchase additional sleeves for around $10. The case is made of zinc alloy casting which gives it a good quality feel.

The fire button is on the front of the mod, above the screen which is placed there so it doesn’t interfere with the replaceable sleeves. Although this is a bit new, we thought it would take a bit of getting used too, but it has been designed with thought and works really well.

If you like transformers then this mod your going to love, it does have one of the nicest looks about it compared to all the other best e-cigarette products out there, it’s really exciting to see how far mods and e-cigs have come in the last year!

The mod is a dual 18650 battery device capable of powering all the way up to 220W. It also has the most up to date OMNI 2.6 board inside, so you get all the necessary menu options along with quick charge, input protection, and something called an equalizing charge system, whatever that is!

The screen shows all the standard stuff like wattage, puff counter, battery life, resistance all spread out nicely and easy to read. Within the menu screen, you get the option to use another feature called the Custom Curve Wattage (CCW) which allows you to adjust the wattage per second of firing which a lot of people seem to like! It also comes with all the standard options as we said which include varies wattage modes (soft, medium and hard), variable temperature controls for stainless steel, nickel and titanium, memory modes and a bypass for those who want any regulation!

Still not seeing the awesome power boost feature we saw on the Council of Vapor Xion Mod but I guess it’s too early for other manufacturers to copy this awesome feature just yet!

The kit also comes with the latest NRG Tank, which produces some really good and tasteful clouds, and supports both the TCP directive for EU countries with a 2ml capacity tank (23mm diameter) and the standard 5ml version (26.5mm diameter).

The tank comes with the top fill feature, where you slide the top cap to access the reservoir and has 5 different coil options to cover all types of vapers.

The mod is definitely reliable as you would expect from Vaporesso, but how does it perform? So with the 0.15 coil in the NRG tank and the mod set at 65 watts the kit produces a nice amount of vapour that tastes really nice, a bit of a surprise for a prebuilt coil!

Pumping the mod up to 90 watts the first vape is also really good, but vaping immediately after produces a slight dry vape.

If you’re a higher wattage vaper then this mod might not suit as you do have to wait for the cotton to re-saturate, but for normal vapers, the kit performs really well. Vaporesso has also released a new addition to their Revenger family, check out the Vaporesso Revenger Go review.

The performance of this mod meets all our expectations from a top manufacturer like Vaporesso, the design is definitely an eye-catcher, and with the replaceable sleeves bring a new dimension to vapers.

We would recommend this device for new vapers, and those who are looking at e-cigs to quit smoking, or even those who are looking for a new mod, but for the more experienced users out there this mod only really brings in a new design to the market, no other new features that make you want to drop everything and rush out to buy one!