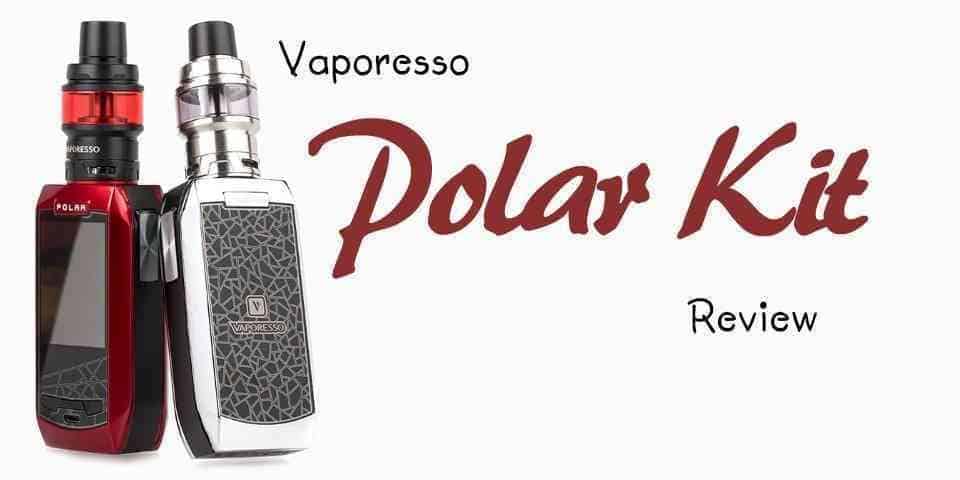 Vaporesso are well known for producing some great vape mods, and now they have just released the new Polar starter kit packed full of features, the mod itself is a 220W mod powered by 2 18650 batteries and comes complete with the Cascade Baby Sub-Ohm tank. So how does this new mod kit compete with the best on the market? Let’s find out!

The Vaporesso Polar mod looks pretty standard as far as box mods are concerned, although it does have a modern look and feel, which we are starting to see accross all the best vaping devices.

Available in a whole host of colors, 7 in fact, including red, gold, metallic grey, green, blue and more, there’s certainly plenty of choices.

Measuring in at 144mm tall, which includes the tank, 45mm wide and 28mm depth it’s pretty average size. It does have a nice big 2” TFT color screen displaying all the important information that we’ll look at later.

It’s nice to see that Vaporesso has mounted the 510 spring loaded thread on top in the middle of the mod, so other tanks will also balance well.

The Vaporesso Polar mod has the new Omni board 4.0 chipset inside and claims to be one of the fastest responsive mods on the market yet providing the user with a whole host of features.

5 clicks of the fire button turn the Vaporesso Polar on, where you’re presented with the home screen that shows the current wattage, the resistance of your coil, working voltage, puff counter, puff timer, vape mode and dual battery indicators.

3 clicks enter the menu area with icons representing the different sections. These include VW-H which is hard vape mode, VW-N for normal, VW-S for soft mode all for variable wattage. The other icons include CCW which is where you can adjust your power curve related to the seconds you fire the device. Then there’s SP mode, which is just a fancy screen display and for resistances from 0.03 – 5-ohms. The last few icons include VV – which is obviously variable voltage mode, CCV which is your custom curve for voltage mode, then you have your different modes for temperature control, which include SS – stainless steel, Ni – Nickel, Ti – Titanium, M1, and M2 – memory modes. Each of the temperature control modes allows you to adjust the TCR (temperature coefficient of resistance) and also the working wattage.

You can also set the mod to bypass mod, which basically fires the mod like a mechanical mod without wattage or temperature control. You still have all the safety features though.

You also have the option to adjust the time, brightness, puff counter and display colors, automatic off timers, screen timers etc. All these are found in the settings option in the menu.

The Cascade Baby SE Tank holds 6.5ml of juice, which is in the high side compared to other sub-ohm tanks. It is top fill, where you lift the top and slide to one side to reveal the fill hole.

It measures in at 24.5mm in diameter and has 3 adjustable airflow slits which are on a stopper.

They do include a mesh coil in the kit, which is nice to see. In our opinion mesh coils produce the best flavor and great vapor, perfect for performing some great vape tricks!  Along with the 0.18-ohm mesh coil, they also include the GT 8 0.15-ohm coil that’s pre-installed in the tank.

We removing the pre-installed coil and fitting the mesh coil that’s also included in the kit. Setting the mod to 50W which is on the low side of the recommended wattage (50-80W).

The flavor is actually really good, instant and fulfilling bringing the best out of your juice. The response mode is so much better in hard vaping mode, they claim it’s the quickest, but it’s in the same ballpark as some other mods, but not as good as the Wotofo Flux Kit.

Overall the Vaporesso Polar Starter Kit is definitely up there with the best, great responsive and relatively easy to use the mod, considering all the packed in features. Could be perfect for vapers who are moving on from pod vapes or even Cigalikes, who want a stronger, deeper hit.

The Cascade baby SE tank is a great partnership with the kit, and the mesh coils are by far the better coils for this tank.

If you’re new to vaping, this type of kit may be a little advanced, it might be better to look at either pod vapers or vape pens first. If you’ve vaped before and want to try out a host of new vaping features, then the Vaporesso Polar Starter Kit is a great choice.