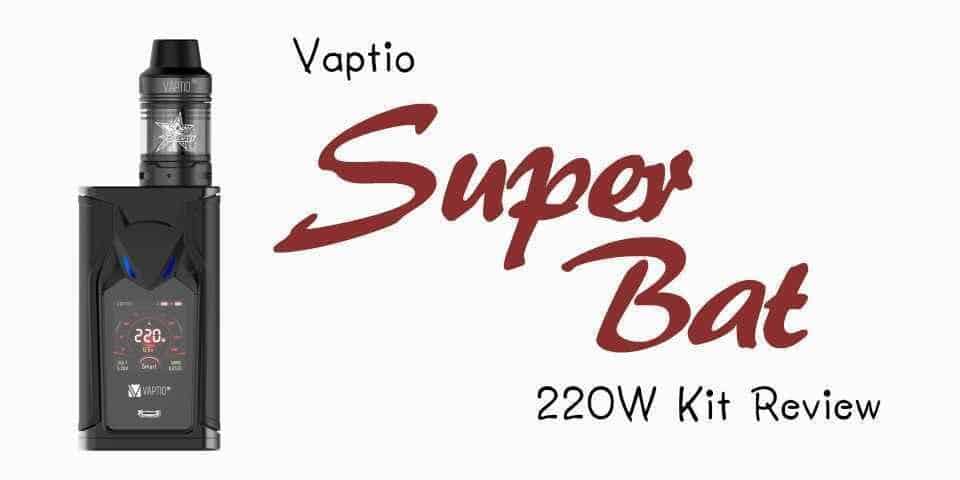 Following their superheroes theme like their spider Wall Crawler model, Vaptio has released a new box mod kit named the Super Bat. Designed for the more serious vapers out there with features galore, does this new box mod kit live up to the expectations and compete with the very best mods? Well, we take a close look at their new mod kit to see.

Named the Super Bat, you would expect the design to be Batman related, but Vaptio has been more subtle so you don’t have to be a comic book fan to appreciate the design. Yes, their bat logo is on the back and front, also on the sides by the fire button, but they are relatively small. Also, you have led’s on the front that looks like eyes, and on the rear two strips of led’s that resemble wings. But in all honesty, you have to look at the design closely to figure out its bat-related.

The initial release of the Super Bat Mod kit comes in 3 different color designs; Silver and black, red and silver or just black. Not sure if Vaptio plans to release further colors in the future, so we’ll keep an eye out there and update you.

To be fair, the design is pretty cool and really resembles the Wall Crawler to a certain degree, only this mod is larger taking 2 x 18650 batteries and also having led’s plastered all over it!

Measuring in at 85.5mm tall, 46mm wide and has a depth of 30mm the mod is average to small sized in comparison to other dual 18650 mods. The front houses the 1.3” full-color TFT screen and above the screen is where the plus and minus buttons are to adjust wattage and scroll through the menu area.

The top has a side mounted spring 510 thread, so you can use other tanks on this mod if you prefer.

This is where we get a little excited, exploring the features of this dual 18650 220W mod! To enter the menu area you click the fire button located on the side 3 times, here you can use the + and – buttons to select the Vape mode, settings, or theme areas.

Within the settings area, you can see the puff manager and the LED settings. Also, there is a theme area, but at present, there is only one theme available, more will be added in further firmware updates we’re told.

The Super Bat mod also has a resistance range of 0.1-5.0Ω so should cover all vapers there.

We really liked the look of this mod, however, we were a little confused with the menu area. For example, when we went into the settings mode to change the led mode, there were no indicators that we had actually selected that mode. Would be nice to show which mode is actually selected with a tick or something. Whenever you selected a mode, it just went back to the previous screen, we thought it was a glitch in the firmware, but it does actually set that mode!

Another area of the menu screen that’s confusing is the puff manager. It just displays the smoking times and puff times. No way to reset these, at least we couldn’t find a way! So compared with the best e-cigarettes out there, it could be a little easier to follow.

On to actually vaping the Super Bat with the Frogman tank. We were using the quad coil W4 Coil which is 0.15Ω and starting out at 50W. It’s always best to start a little lower with new coils to give it chance to fully saturated the cotton.

The flavor comes through straight away, nice cloud production as well. We are really loving this tank. Also, if you set the mode to smart and change it to high, the response rate is awesome!

We really loved the performance of this mod kit, the Frogman tank works really well with the Super Bat mod, so if you can, buy the kit option which includes the tank. It may not suit the new vaper, looking at e-cigs to quit smoking, but vapers who have used these features before will love it.

Nice selection of features, albeit some take a little to set up, we still struggling with the CCT modes! But for straightforward wattage and temperature control vapers, we think you’re going to love Vaptio’s Super Bat!