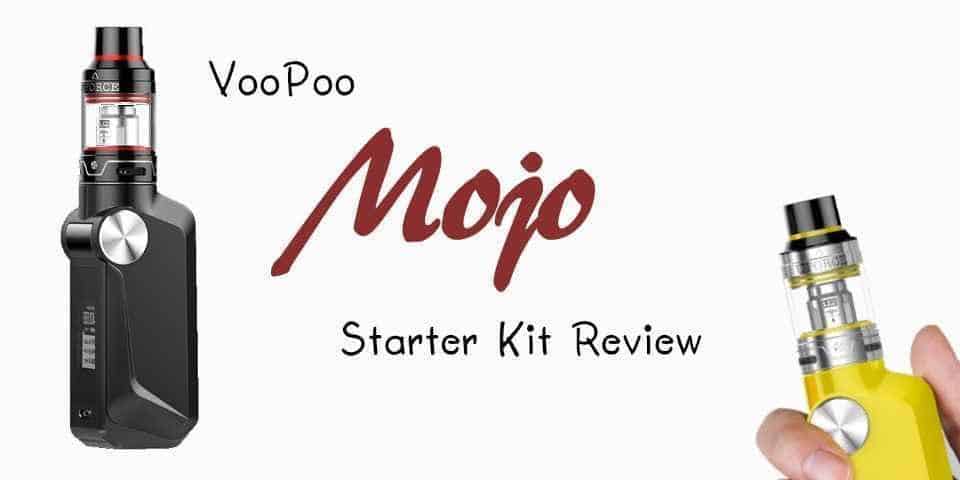 If it’s small vape mods you like then VooPoo have just released the MOJO box mod which comes with the UForce tank so you’re probably going to be interested in this one! Its built-in battery has 2600mAh of power allowing the mod to reach a wattage of up to 88W. But does this starter kit perform as well as you expect coming from one of the better manufacturers? Well, we take a close look to see.

VooPoo has changed things a little with this design, it’s not your traditional box shape like you see on all the best vape mods, it has 2 huge up and down buttons on either side with the fire button just above the screen.

It almost looks like the big buttons on the side hinge and can be bent in half, but trust us, you can’t! But that would be a cool feature, a flick vape mod!

VooPoo is initially releasing the mod in 7 different colors including black, grey, blue/cyan, yellow, orange, red and white all have the UForce tank with some color trim to match the mod.

The top of the mod all leads to the 510 platform and thread but the thread does protrude a little, so your tank isn’t going to sit on it completely flush, but it’s only by 1-2mm so it’s not too bad.

The platform has been designed for 24mm tanks, so if your planning on using your bigger tank on the Mojo mod, then your going to get some overhang.

Overall we really like the design of this starter kit, we have the white and yellow version, for us, the white looks better but thanks to the host of colors available you’re free to choose your favorite!

Let’s start with the screen which displays all the relevant vape information like wattage, battery indicator, coil resistance, voltage and vape time, all of which is pretty neatly laid out and easy enough to read and understand. You can customize the screen if you like, but no need really.

The fire button has the common controls like 5 clicks to turn the mod on and off, 3 clicks to enter the temperature menu, where you can click 4 times and adjust power. 3 clicks again to move from stainless steel to nickel, again 3 clicks to move to titanium and another 3 clicks to get back to wattage mode. So a little different but not too confusing!

To enter the true menu area, you need to click 3 times then pressing the up and down button together shows where you can adjust your memory setting (custom wattage per second of firing), set the resistance and lock the device, but this locks the whole device including the fire button!

The VooPoo UForce tank has been well renowned for one of the better stock coil sub ohm tanks, and should really feature in our list of the best sub ohm tanks. It’s known for its great flavor and great clouds, especially in wattage mode.

The whole time we tested this tank on this and other reviews the coils had no problem with wicking, so no dry hits whatsoever, even on the higher wattage settings.

It would have been nice if they would have reduced the size a little for this kit, but we’ll talk about that a little later.

The whole kit works really well together, it’s obvious that VooPoo have a great tank and they have built a mod especially for it. We wouldn’t say its great for beginners because you really need to do direct lung inhales to get the most from the Mojo kit, but take a look at our best e-cigs for smokers guide if your new and want some tips.

The vape has a smooth feel with plenty of cloud and flavor. The responsiveness is pretty good too thanks to the new GENE chipset inside the Mojo, although if you’re using it at 70-80W the battery obviously drains quicker and the less battery you have the less responsive is the vape from when the fire button is pressed. That said around 50W it lasts pretty well.

Although VooPoo has designed this starter kit around the UForce tank, we would have liked to see a smaller version of the tank with the Mojo kit. Not just for the aesthetics point of view but also the whole kit seems to be a little top heavy, so it’s not that stable whilst standing on the table, we’ve lost count how many times we’ve knocked it over! That said if your addicted to vaping then this is a great one for your collection.

VooPoo has used the awesome GENE chip in this mod, and due to this the accuracy in temperature control mode is pretty much spot on. In wattage mode, the mod fires great and thanks to the LiPol built-in battery you can push the wattage for a little longer than you get from a standard 18650 battery. So really thumbs up for the new VooPoo Mojo starter kit and scores highly against all the best e-cigarettes.

If you love the design, then you’re certainly not going to be disappointed with the performance.