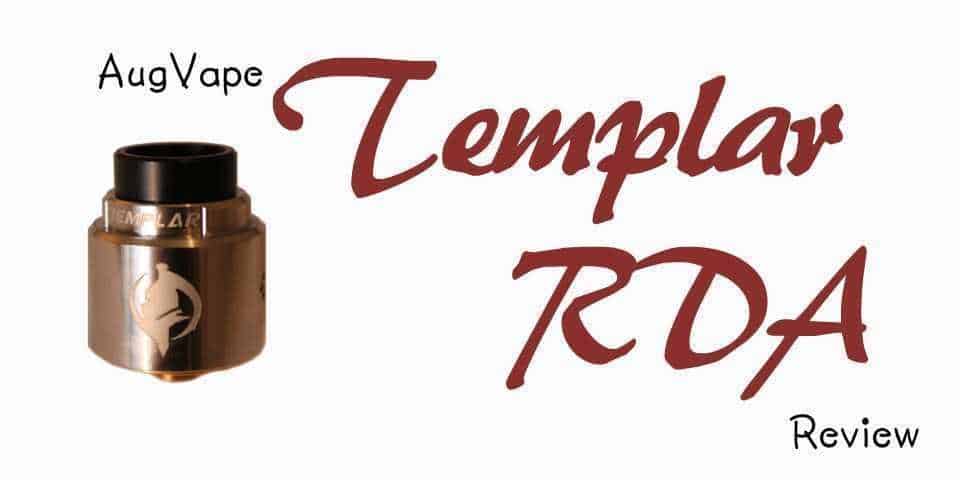 Well, haven’t Augvape been busy, just a few months ago they released their 200W V200 Mod which received some great reviews. But Augvape is better known to the expert vapers for their unique and cutting-edge RDA designs. For the last 7 months, they have been working on a new RDA, one with super low profiles to enhance every bit of flavor from your juice. Finally, it is about to be released, the new Augvape Templar RDA. Let’s take a look to see how successful they have been, or whether it’s one to avoid.

Measuring at 22mm wide it’s a relatively small RDA and with only 26mm of height above the mod, it looks great. If your not sure about RDA’s then check out our guide comparing RDA’s to RTA’s which might help. Anyway, the Templar’s low profile means your closer to the coils so you don’t lose any flavor. They have utilized the velocity clamp system which has been used by many other manufacturers, but AugVape’s design has been enhanced to ensure you can build your deck without bending your coils.

The deck features one screw to clamp either one or two coils, making your job even quicker. If you are using a single coil there is a zirconium dioxide insulator, to fill the unused side and prevent any liquid leakage. This material is the same used in dental fillings, well made and fits into position well without any rattle.

The Templar RDA has two airflow slots either side featuring 3 layers, this means greater control of the amount of air flowing through the RDA. Simply turn the top cap to reduce or increase the flow, although this may seem quite stiff, it is designed that way for a reason, not to move once you have found your perfect position.

You also get an extra frosted, bullet shape cap which can be used instead of the regular cap and to be honest it works really well. You can’t adjust airflow with it but it’s pretty well set to where it needs to be. It’s great to see this extra option in the Templar RDA kit.

Truly, this RDA looks great, matched with one of the best vape mods the whole thing is just a work of beauty!

This single or dual coil RDA is built for one purpose, to maximize the flavor whilst making it as easy and quick as possible to build your deck. This is achieved primarily by the super low profile.

To build the deck requires you to hold the coils in place with one hand and to screw down the single titanium screw until tight. Add your cotton and you’re done. If you’re using a single coil, don’t forget to add the insulator to avoid any spillages.

We initially thought that the Augvape Templar RDA was going to be just another standard RDA released to the market, but boy does this thing deliver the flavor. Super easy to build on and with a nice control of the airflow makes this one of the best RDA’s on the market for both beginners and the more experienced vapers out there.

The extra frosted bullet shape top cap is actually better than we thought, and we use it over the standard cap. It not only looks better but in our opinion performs just as well with the added benefit of making it even easier to remove to drip more juice on the coils. Be sure to check out our best vapes, as this RDA will be featured at some point!

Overall we were super happy with the release of the Templar RDA and give it a huge thumbs up! Good job guys!