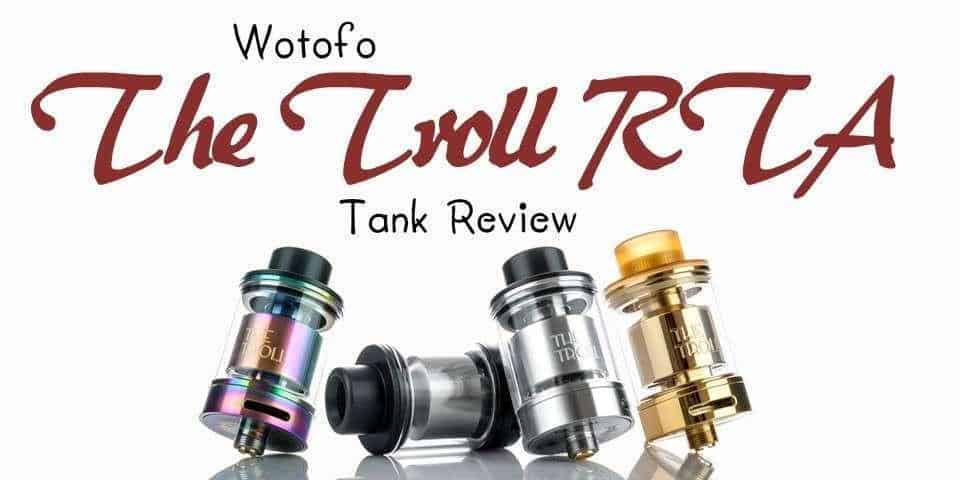 The Wotofo Troll RTA is an atomiser attached to a tank reservoir of e-juice and requires no direct dripping or expert adjustment – simply fill the tank and fire up. Usually, RTA’s operate on lower power levels than RDA tanks and produce smaller clouds of vapor. However, the right RTA, like the Troll RTA, delivers so much flavor that vapers don’t mind the small trade-off.

The Troll Up Close and Personal

The Wotofo Troll RTA comes in gold, stainless steel, and rainbow. All parts have been expertly machined and well assembled.  The threads are perfectly smooth, and there’s a sexy Troll engraving on the barrel where it screws into the deck section. The build quality is excellent considering the price. As we said this follows the Troll RDA, so what exactly is the difference between the RDA and RTA version. Well, I think that’s best explained in our post about the differences between RDA and RTA tanks and tells you exactly!

The base diameter is 24mm, following the trend for more powerful new atomizers, but the design differs from other RTAs with a deck section placed in the middle rather than the bottom like other RTAs or on top like RDTA’s. The total size is 41mm high and 24mm diameter with 5ml juice capacity.

There is a convenient top-filling tank – no juice control – with two generous kidney holes for refilling and a thin top cap. The e-liquid siphons to the extra space under the bottom of the deck where it feeds the cotton.  The wide bore Delrin top cap doesn’t get hot, even at high wattage, which is a comfort we now expect from good vaping gear, but unfortunately the Wotofo Troll RTA does not have a 510 drip tip adapter. This may be a drawback for those who prefer to use their own special 510 drip tips.

The Wotofo Troll RTA features adjustable bottom airflow, which is easy to manipulate, with two 3mm airflow holes which make it a very open draw with plenty of airflows, perfect for lung hitting, in fact, it reminds me of the Kennedy RDA.

Building on the Wotofo Troll RTA is a pleasure because once the build is installed, you don’t have to fuss with centering it – you can easily move it as far or close as you want it to the airflow. There are four post holes (like a velocity-style build), but the coils are separated with a German-made Peek Insulator so that the air is directed on both coils but without a gap between the posts.

The chamber is small which limits coil options slightly (dual coil only), or you may risk melting the insulator.  A Fused Clapton build is no problem (you receive 3 pre-made Fused Clapton coils with your new tank), but large builds such as Staple Coils or Staggered Fused Clapton’s is not advised. Also, you need to pay attention to the cotton, which is overlooked by many new users of these types of tanks. We have a guide on the best vape cottons available which should help!

Fluff the cotton and cut it just at the edge of the build deck above the airflow control holes so you can tuck the edges into the holes. Never over-stuff the wicking channels, but you should see the cotton just poking out of the wicking channels once you have the tank reassembled.  In short, it’s a wiz to wick, and once the wicks are embedded, it’s an absolute pleasure just to refill and go!.  Oh, and did I mention:  the Wotofo Troll RTA does not leak.  Not a drop.  There is no juice flow control on RTAs, but you don’t need it with this design.

You’ll get no dry hit even when chain vaping at 80w.

Vaping around 60-80W is a flavor fest due to the raised deck, with a dense, saturated vapor with no spit back and no leaking with an overall performance close to an RDA.  To me, the only con worth mentioning is the Philips grub screws which are small and shallow – you have to be careful not to strip them. The good news is that you can replace it with hex grub screws (according to Wotofo, use M2.5 0.45mm screws).  Coupled with one of the best box mods, this tank can deliver some awesome tasting vapor, so if your new to vaping or an expert who wants a more convenient vape then you’re going to love the Troll RTA! Buy it!