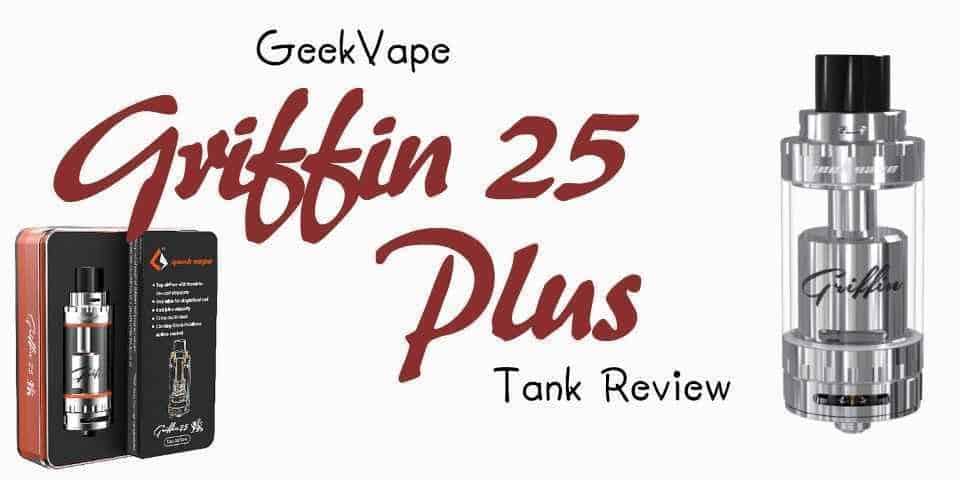 In-depth Review of the Griffin 25 Plus

The first thing that you’ll notice when you receive your Griffin 25 Plus is that it looks a lot like the original model. There’s a reason for that, of course: its outer shell is pretty much unchanged. In fact, the real differences involve the modifications and improvements that were made on the overall atomizer build. In other words, you should start out with at least a basic familiarity with the Plus if you already own the original version. If you don’t, don’t worry; this device is easy to use so there’s no steep learning curve.

Don’t be alarmed when your Plus arrives, or think that they sent you the wrong version by mistake. Geek Vape used the same packaging orientation with the Plus, apart from the label on the box. That package comes with the RTA, which has already been assembled for your convenience, as well a ceramic adapter that can be used with a single-coil setup, an extra tube (Pyrex, of course), Geek Vape’ own little screwdriver, and spare o-rings, screws, and Delrin top cap.  In other words, virtually everything you need for your device, and then some. This is pretty standard with all the best tanks these days, so don’t feel that GeekVape is delivering more for the money!

The device’s tank is capable of holding up to 5 ml of e-juice, so it’s big enough to handle most lengthy vaping sessions or ensure that you don’t run out of liquid if you’re out and about. It might be the same size as its predecessor, but this tank comes with larger juice flow control slots than that first Griffin. That offers better control than its predecessor and should be an appealing option for anyone who wants greater flexibility in his or her vaping experience.  RTA’s are becoming more popular than RDA’s mainly we think because of the convenience of carrying the e-juice around, but you can read the main differences between RTAs and RDAs here.

There are also improvements in the airflow controls. The slots now click to secure themselves in place during any adjustment. There is also an expanded cover – made of stainless steel, of course. That provides some added durability and should help to protect your device from minor accidents.

The Main Difference From the Griffin 25 RTA

The big changes come at the build deck level, though. This deck is much larger than the first Griffin 25, which should tell you what the manufacturers had in mind when they designed it: more room for your builds! Like its predecessor, the deck has two posts, but they’re larger and come with much larger post holes. That should open up your build options tremendously since you’ll have greater access and room to experiment with different wires whether they be stainless steel or nickel.

Some might not like the new wicking system since it involves a radically new type of wick slot. They’re no longer filled with cotton, but instead, require you to position the leads properly to block juice from leaking into the atomizer chamber. We’ve even heard a few people suggest that this setup might hinder efficient wicking and dilute the vaping experience – but those fears turned out to be unfounded. In our experiments, we found that there was no difference in the vaping experience from any other wick system we’ve used.

This is not your everyday average vaping device and is probably too much for beginners to handle, but if you use it with one of the best vape mods on the market, you will be very happy indeed with the performance. You need to know a little bit about coils and wire, and how to position everything properly. For veterans or anyone with even a little experience with such things, it’s an easy device to use. And once you get it set up and ready to go, you’ll be amazed at how well it performs.

In our tests, we consistently produced huge clouds of vapor. In fact, vapor production was so intense that we couldn’t resist a little impromptu contest to see who could get the most out of their Griffin 25 Plus. The consensus from the test group was that the flavor is about as pure as what we saw from the original version, but that’s a positive too. The only drawback might be in e-juice consumption. Be forewarned: this is a thirsty unit! We tested this tank with the best 26650 mods, so we gave it a good thrashing!

Overall, we like the improvements we see in the new Griffin 25 Plus, and highly recommend it for intermediate and advanced vapers everywhere. Get yours today!