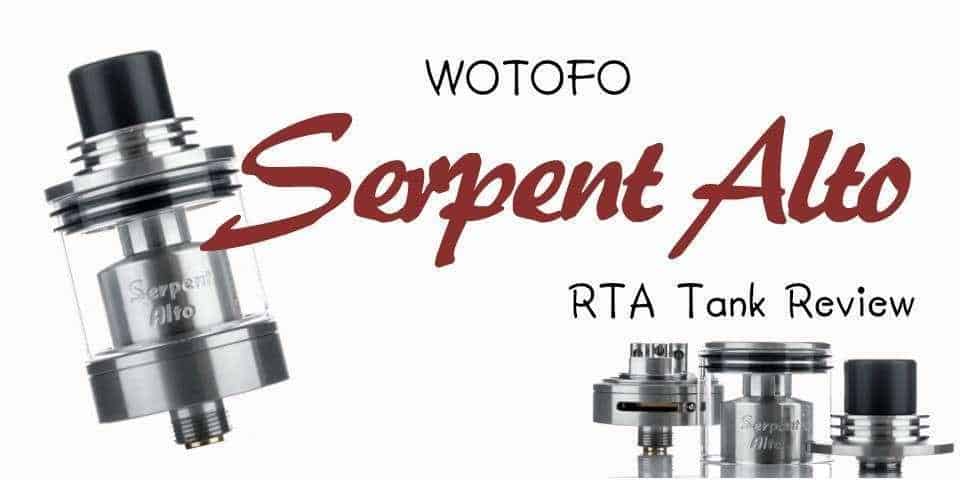 The Wotofo Serpent Alto RTA is a single-coil atomiser with an e-juice tank that does not require expert adjustment to get vaping satisfaction – RTA tanks are designed to produce a clean and tasteful vapor, but does this product match up with the best tanks on the market? Let’s take a look.

The Serpent Alto RTA Up Close and Personal

The expertly machined Serpent Alto is made from stainless steel and Pyrex with black finishing. It’s sleek and sexy with impressive build quality for the price. The base diameter is 22mm which means it will fit perfectly on most of the new powerful mods like the Sigelei Kaos Spectrum but is also suited to the smaller mods like the SMOK G80.  The total size is a titch shorter than the Serpent at 38mm high and 22mm diameter with 2.5ml juice capacity.

The top-filling tank has two generous kidney holes for easy refilling without battling those awkward air bubbles that can form in single-opening tanks. The Serpent Alto’s diameter has remained the same as the Mini, but because it is 1 mm shorter, the Serpent Alto’s tank capacity has lost 0.5ml. It now takes only 2.5ml e-juice, which is still adequate for average vapers.

Wotofo has replaced the Mini’s stainless steel drip tip with a new stay-cool Delrin drip tip and top cap assembly which is somewhat narrower at 0.7mm.  The Delrin drip tip doesn’t get hot even at high watts and can be removed and replaced with your favorite drip tip version as the threads are a standard 510.

The Serpent Alto’s airflow is slightly wider than on the Mini and can be adjusted to produce either throat or lung hits by manipulating the airflow rings. There is a pin to prevent the airflow from opening too wide or rotating 360 degrees by accident.  Unfortunately, you need to open the atomizer to make the adjustment, and some users find the rings a little tight in the beginning.  However, this small inconvenience soon passes as you find your ideal settings.

Building on the Wotofo Alto RTA is pretty easy as the mounting deck has been redesigned. The more efficient airflow now has two air inlets just under the coil, positioned one on each side of the single coil vertical terminal configuration in a small chamber. The Mini had a small risk of short-circuiting when the coil leads were too long, but this problem has been eliminated in the Serpent Alto.

Also, the Wotofo Serpent Alto’s terminal holes are now only 2 mm wide, and you won’t be able to accidentally use complex high-resistance wires as the portholes won’t accept them. You receive two pre-made twisted Kanthal coils with your new tank.

Fluff the cotton and trim just at the edge of the build deck above the wick holes. Remember to bevel the ends a little with a diagonal cut and tuck the edges into the holes. Tuck down the wick on either side, top it with e-liquid, and you are on! For top filling atomizers, you should always take care to close the airflow holes to stop the liquid from seeping out.

Once the wicks are embedded, you just refill and go.

The Wotofo Serpent Alto RTA can hold its own among all the other mini flavor-chase tanks in the market with its thoroughly satisfying cloud density, top taste, and no leaking.  As with the Wotofo Troll RTA, the shallow grub screws could have been stronger, but decking and wicking are not max-muscle maneuvers so careful handling will keep it intact for a long time.  The Serpent Alto’s single coil comes out at 0.36 ohms (unless you use your own) and goes well with modest mods with a 30-50W output.  It is an excellent choice for new taste-chasers and all lovers of single coil vaping.