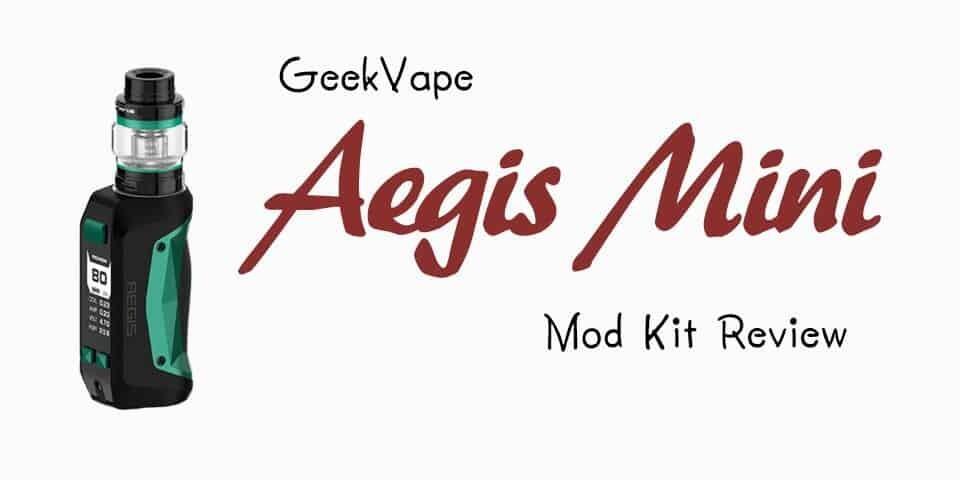 The original GeekVape Aegis with the 21700 battery was a huge seller for GeekVape thanks to its waterproof, shockproof and dustproof design. Many reviews were shown putting this mod to the test by driving over it with their cars, dropping it from their windows, even sticking it in the freezer to test how durable it was. The result always showed the Aegis to still work!

There was one complaint and that was the size, so GeekVape has now released the Mini version, with an internal 2200mAh battery and the Cerberus sub ohm tank. It looks the same, it’s very much smaller, but how does this new Aegis Mini Perform? Let’s take a look to see!

As you expect the Aegis Mini looks exactly like the original Aegis albeit smaller, a lot smaller in fact. Measuring in at 120mm tall with the tank, (78mm just the mod), 39mm wide and 29mm depth, so easily fits into your hand. It’s also really light; the mod on its own comes in at just under 125 grams!

GeekVape is releasing a number of different color options for this kit, which includes black and green, black and blue, black and gunmetal, black and red and all black, which they are calling stealth black. Not uncommon, many of the best e-cig products are released in a variety of colors.

The top features the 510 spring mounted gold-plated pin, with a plate of 26mm, so any sub ohm tank with this diameter will fit.

On the front, you have a nice sized fire button, a 22mm tall screen, and an up and down control buttons. On the base, you have a USB port for charging which is covered with a rubber stopper to enable its waterproof properties.

The base also has some vent controls, but these are covered with rubber valves and will only work if there is a problem with the ventilation, i.e. the pressure will blow the valves enabling the pressure to be released.

Features of the Aegis Mini Mod

Like with the original Aegis, Geekvape are using the AS chipset, which has obviously been powered down to suit the new internal 80W maximum battery. The display looks the same showing the mode, current wattage, coil resistance, amps, voltage and puff counter all nicely laid out and easy to read.

Three clicks enter the menu area where you can change from power to temperature control nickel, stainless steel, titanium, TCR, and full bypass mode. So, exactly the same as the original with some slight modifications to improve the algorithms.

Being only an 80W mod, it didn’t make sense to put a tank on this kit that required some serious power to run the coils. Instead, GeekVape decided to include the Cerberus sub ohm tank.

The mouthpiece has a very low profile and can be removed from the top cap. The top cap is also removable by unscrewing half a turn anti-clockwise which presents two relatively large fill holes. So yes this tank is a top fill tank! There’s also a nice large silicone seal on the base of the top cap to prevent any leaks and provide a decent fit when screwed down.

The tank holds 5.5ml of juice in a bubble-shaped glass and below the glass is the airflow control, with 2 large adjustable air slits.

You get a pre-installed 30-45W X2 Kanthal mesh 0.3 coil, this is specifically designed for this mod, and the higher resistance means it operates at lower wattages. GeekVape also includes a spare X2 coil in the kit.

Starting out at 30-Watts for this coil is a good idea. The Kanthal mesh coil will burn the cotton if it’s not saturated enough and you overpower it. Straight out the gate and the coil produces some really good vape clouds. Flavor seems to be there from the first vape that only improves over time.

After the first few ml of vape juice, turning the wattage up to 40W, then you start experiencing a slightly warmer vape and the flavor at its best.

For a low wattage mod, the Aegis Mini with the Cerberus Sub Ohm Tank is performing really well. The flavor is great and surprising.

You can push the coil a little further, but we wouldn’t recommend much above the 45W that GeekVape advises for this coil.

Pleasantly surprised with the performance and flavor of the Aegis Mini with Cerberus tank, so a huge thumbs up there! The durability is pretty much the same, although as the mod is smaller and lighter it’s not quite as durable as the original Aegis.

The only real downside of this mod kit is the battery and power. Of course, you should expect this with internal batteries at this size, but for a chain vaper, you can expect a life of about 3-4 hours. That said it has a lightning rapid charge function that fully charges the battery in 30 minutes. If your after a more powerful hit, then we suggest looking at the other top box mods.

Overall, a great performing mod to carry around with you which produces a great vape at relatively low wattages.