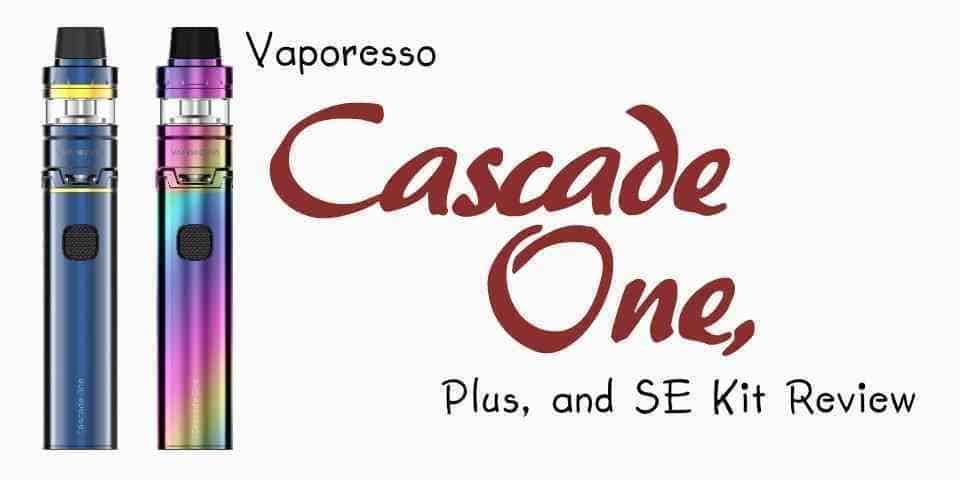 In-depth Vaporesso Cascade One and One Plus Starter Kit Review

Vaporesso has finally released a couple of vape pens which is supposed to match, in performance, to any of the best vape pens on the market.  So the big question is, should the new Vaporesso Cascade One or Cascade One Plus, be your first choice when it comes to sub-ohm vaping on a vape pen? Well, we take a closer look to see.

Keeping to the traditional look of the vape pen Vaporesso have designed the Vaporesso Cascade One and One Plus kit the same. Let’s take a note of the differences between the 2 kits:

There is also a special edition version released:

Vaporesso Cascade One Plus SE – Exactly like the One Plus but holds 2-6.5mm of juice and has a different design on the battery shaft.

So as you can see the difference is only with the size, they all use the Cascade Tank, differing from the Cascade Mini on the One and the Cascade Baby on the One Plus and SE models. But the coils are exactly the same and interchangeable.

One huge design difference with all the Vaporesso Cascade One models to other vape pens is the way the coils are fed e-liquid, with a separate coil and juice chamber which apparently increases the life of the coil and reduced the chances of any dry burns. This design feature was the reasoning behind the name Cascade, as the tank slowly cascades the juice down to the coil.

Vaporesso is initially introducing a number of different color options for both the Cascade One and One Plus Kit including black, silver, gold, shiny gold, blue and rainbow, but if you opt for the SE version the designs and colors are limited to black, gold, red or green.

Other design features include the 510 spring loaded tank thread at the top, which you tend to see on all the best e-cigs these days, the tank has a 510 drip tip, the square fire button halfway down the base (when the tank is fitted) and the USB charging port at the back behind the fire button.

They have the 5 click on and off feature, and that’s pretty much it!

Both the Cascade Mini and Cascade Baby are designed the same with 3 adjustable airflow slits at the base of the tank. They both also are top filled tanks, with a unique locking feature to avoid any leakage. To open the tank to fill your juice you have to pull the top cap up then swivel it to one side which then presents 1 fill hole.

One part of the design we don’t like is the view of e-liquid, it’s best to actually flip the tank upside down to see how much juice is left, thanks to a lot of the juice being hidden from view with the base portion of the tank!

First up, we testing with the CCELL ceramic coil and one thing we notice with the Vaporesso Cascade One Plus is the time it takes for the juice flavor to come through. This is kind of typical with ceramic coils so no big deal. After about half a tank, the coil is well saturated and the cloud content along with the flavor is really good!

Now using the mesh coil, the vape, the flavor, and airflow is simply amazing. Great tasty flavorful clouds that are hard to believe coming from such a simple setup. Vaping it all day hasn’t produced any dry hits, hot spots or burnt taste, thanks to the design of the mesh, that sometimes manufacturers do get wrong. The only real disadvantage is that the mesh coil seems to go through the liquid a lot faster, but with the larger Vaporesso Cascade One Plus Kit or SE kit, the larger tank helps.

For a simple to use vape pen we were really surprised with the performance from the Vaporesso Cascade One Plus, especially with the mesh coils. If you like flavor and a nice cloud production then you’re going to love the Vaporesso Cascade One and Plus. Is it one of the best e-cigs to quit smoking with? Well, it’s up there, it uses a sub-ohm tank, so if you can get use too direct lung inhales then it would be a great choice.

Which one should you buy? Honestly, it doesn’t matter. As the design is the same the performance is also the same, we don’t notice any difference at all in performance. The only difference is the overall size, battery size, and tank capacity. So it depends on which one you prefer; large or small!

The Vaporesso Cascade One and Cascade One Plus is a great vape pen that is certainly going to be hard to beat when it comes to simplicity, and vape satisfaction.