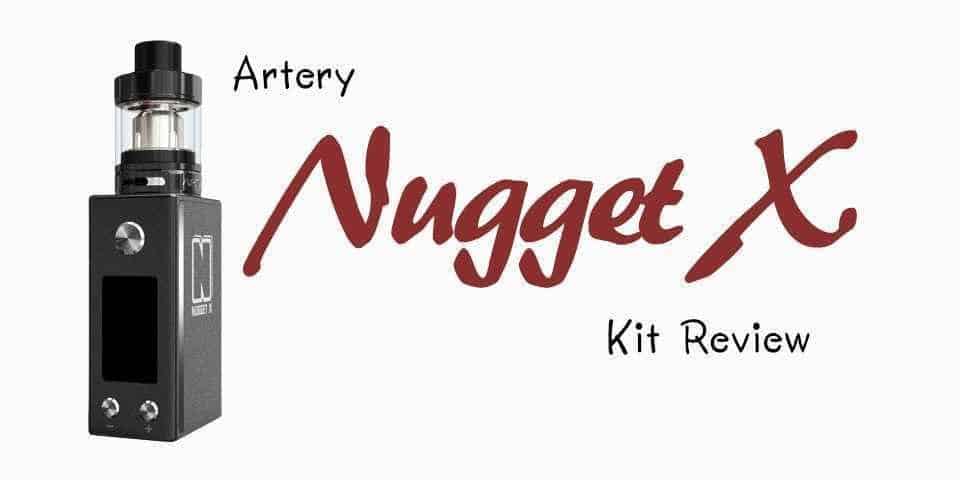 The original Nugget was one of the first small, and we mean small, mod kits to hit the market and now they have a new version which is the same size, so what’s so different and is it a mod you can use all day with the same effect as a regular sized mod? Well, we take a closer look at the Artery Nugget X Kit to see.

Measuring in at just 97mm tall with the tank on, 36.6mm wide and a depth of 23mm you can tell this mod is designed for one reason, to the small, smaller than all the other vape mods but to produce a decent vape.

What’s impressive with the new design, isn’t the size though, it’s the way that Artery has managed to double the capacity of the battery from 1000mAh to 2000mAh and yet only increasing the overall size to a few mm’s.  They have also managed to increase the OLED screen size which now measures in at 0.96”. Which doesn’t sound that big, but on such a small mod, it is!

Above the OLED screen is the slightly oversized firing button and below the screen are the up and down buttons. To the side is the USB charging port and on top is the spring loaded 510 screw thread for the tank, conveniently placed in the center.

Artery is originally releasing the Nugget X in three colors, red, black and gold all with matching AT22 Tanks.

One new feature with the Artery Nugget X Kit is the updated firmware inside the mod, making the menu system a whole lot easier to read and use and now on par with the best electronic cigarette devices. You can now easily flick between settings even using just one hand!

Because of the small size there is one huge caveat with the design, the total output of the mod is just 50W, this is on the low side even for vapers who don’t vape at high wattages, but Artery have designed their coils around this and thus only have a recommended wattage of up to 40W. This means it’s really best used with the AT22 Tank, and not your favorite RDA/RTA or sub ohm tank.

The home screen tells you which mode you’re in, the current wattage, voltage, resistance of the coil, battery indicator and puff timer. So they have crammed everything in, without it looking too busy.

Clicking the fire button 3 times enters the main menu area, here you can set the power mode, either normal power mode or custom power curves you set up (where you set the wattage for every period the fire button is pressed). Other modes include temperature mode where you can choose between the usual Stainless Steel, Nickel, Titanium coils or choose the TCR mode which is the temperature coefficient of resistance.

You can also select voltage mode if you prefer firing using voltage, or bypass if you prefer more of a mechanical mod setting yet have all the safety features.

Included in the Artery Nugget X Kit is the AT22 Tank which is a nice top filled sub ohm tank. You do get 2 x AL1-B 0.3-ohm coils, one preinstalled which are best vaped around 30-35 Watts, ideal for this mod.

Really easy to use and refill with the top screw thread giving you access to the 2 large fill holes, one to allow the air to be released when filling so you’re less likely to spill any juice.

The tank also has two nicely sized air holes on the base, it’s unlikely that you will need this completely open due to the lack of power, but it’s nice that it’s adjustable to suit most vapers. The tank is really nicely designed and works really well with this mod, but remember the best sub ohm tanks on the market have been designed to be used with more power, so may not suit the Nugget X.

Setting the mod to power mode and at the lower level of the coils wattage rating of 25W let’s test it out! The amount of cloud this tiny mod produces is actually really surprising, we were expecting the similar amount as a pod, but in reality, it’s more like a typical box mod.

The airflow is definitely to airy when fully open and loud, we found it’s better halfway closed. The flavor is certainly coming through really well, it’s actually hard to find anything wrong with it!

Thanks to the stainless steel coils, you can also test out the temperature control features with this mod too, another plus!

If you’re looking for a mod which is small and easy to lose in your pocket then this is certainly one of the better performing devices. It’s also well suited to new vapers looking to quit smoking. One big point though, it’s not going to compete with the more powerful mods out there, but Artery has done a great job in reducing the size without ruining the vape experience.

Overall we were really happy with this mod, but only if you are looking for a tiny mod to carry around with you. If your priority is flavor and cloud production then there are obviously better mod kits on the market.