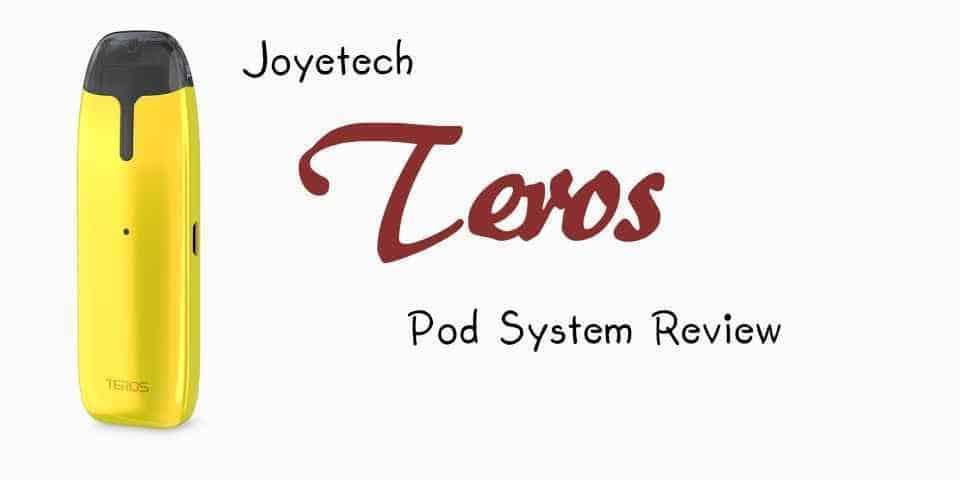 Pods seem to be storming the market; pretty much every manufacturer has now released at least one version thanks to this demand. So how does the new Joyetech Teros pod compete with the best pod systems on the market? Let’s take a look at this pod to see.

The Joyetech Teros is slightly bigger than the traditional pods you see available like the Juul Pod for example. The Tero measures in at 90mm tall, just less than 30mm wide and 12mm in depth, so, all in all, it’s still pretty small and fits in your pocket well! With an overall weight of just over 57grams, it’s also very light!

Joyetech has decided to initially release the Teros in 8 colors, including black, white, and silver, yellow, orange and purple all of which are plain, no fancy designs, but we may see some special edition versions later this year, depending on the popularity of this mod.

Being a slightly larger pod gives the design 2 big advantages. One, the pods hold more e-liquid in this case 2ml to be compliant with the new TPD (Tobacco Products Directive) and two, the battery is slightly larger with a 480mAh capacity. Now that may seem small compared to say, the best box mods on the market with around 2-4000mAh, but since the pod systems use less voltage, 1.8V, the systems still last for the day without charge, sometimes longer, even if you are addicted to vaping and chain vape!

As with all pod systems, the Teros is using airflow sensors to activate the battery, so there’s no need to press any buttons to vape. In fact, there are no settings at all on this pod system.

One great thing with the Teros is the refillable pod cartridges! Yes! So many manufacturers make their cartridges with custom, closed pods meaning you have to buy new pod cartridge when your juice runs out. This is a meaningless tactic as the atomizer can last up to 10 refills, the only reason manufacturers do this is to extort more money from the consumer. But not with the Teros! You can refill the pods as many times as you like, at least until the vapor stops and you know it’s time to change the atomizer!

Another great feature we see on the Joyetech Teros is the simple battery indicator, in this case, it’s represented with a LED light which flashes different colors depending on the battery state, i.e. Green means more than 50%, single red means 20-49% and a flashing red light mean less than 20%. Simple, but effective.

We’ve said it before, but it’s worth mentioning again, the pods on the Teros are refillable! So glad to see this, so much money is wasted throwing perfectly good atomizers away just because the manufacturer designed it so you buy more pods!  To refill, simply remove the cartridge from the base and remove the stopper at the side where you’re presented with the fill hole. Be careful though, this fill hole is pretty small so it does struggle to release the air when you add your juice, so just do it slowly to avoid spillage!

With the Joyetech Teros, you get two Teros cartridges each are 0.5ohms in resistance, so yes this pod suits mouth to lung vapors.

One thing we can check out is the rate this pod wicks. This is where the e-liquid saturates the cotton within the atomizer and produces flavor, as opposed to any dry or burnt hits. The Joyetech Teros actually wicks really quickly and you seem to get the flavor as soon as you start vaping on it which is very impressive, and shows that Joyetech has thought about the cartridge design.

There’s no waiting around for 10-15 minutes initially waiting for the coil to get saturated! We only see this performance in the best e-cigarettes, so it’s really good to see that Joyetech has also stepped up their game.

With the 0.5ohm atomizer, which is the only resistance available, the Teros produces a nice smooth vape with the crackle that vapors seem to love! Thanks to the sub-ohm resistance it also supports mouth to lung vapes, which is not always true with other pods. There is no air flow control though so you’re stuck with slight resistance.

The Joyetech Teros feels nice; Joyetech has taken care of the design and manufacturer of the Teros, producing a quality feel and look.

The performance is also really good for a Pod system, creates some nice flavors and vapor, obviously you’re not going to be chucking out huge clouds from this device like other vape pens due to the low wattage, but all in all, it’s still pretty good.