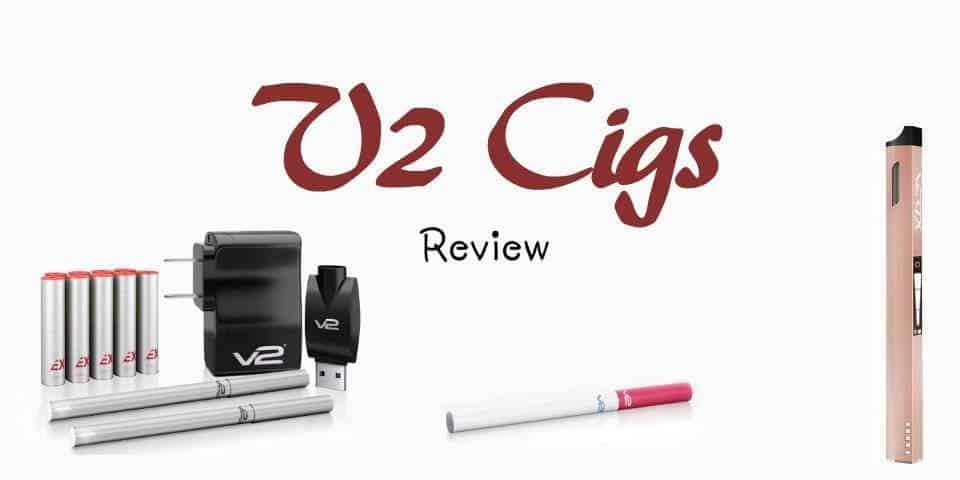 In-Depth Review of the V2 Cigs:

Update November 2018: Unfortunetely V2 Cigs has now been disposed of with a $75 million deal with Juul. Learn more about V2 closing down and where customers can go here.

Founded in the US in 2009, V2 was one the early players in the industry of electronic cigarettes. Within a two-year period, electronic cigarette review sites would soon acknowledge V2 as the number one company in the industry. With over $100 million dollars in sales, V2 is the company that has sold the most e-cigarettes in the world. V2 is the go-to e-cig brand in the world; or is it?

V2 have released a number of different e-cigs over the years, here’s a summary of each kit:

V2 Standard Kit – Probably the most well known and their flagship product, although it has now been upgraded since it’s an initial release. Designed in the cigalike style it really feels like you smoking a real cigarette and that’s exactly what V2 was aiming for and hence why it is still popular today with people wanting to quit smoking

Check Out The Classic Kit

V2 Standard EX Kit – This was V2’s first attempt to take their popular cigalike ecig and improve it. Producing a 280mAh battery (30mAh more than the original) but also adding a battery indicator, and what they claim, improved vapor.

Check Out The Ex Series

V2 Pro Series – V2 were doing really well with their cigalike ecig models above, but they decided to move with the market and release a vape pen named the V2 Pro Series 3. They also released a larger version known as the Series 7 but that fell a little short of popularity due to its bulky look. We reviewed the V2 Pro Series 3 back in February 2016.

Vapor2 Trinity – Now V2 wanted to hit the box mod market, so they designed and produced the Trinity mod, smaller than typical box mods but powerful enough to produce some great tasting vapor, check out our full review of the Trinity.

XEO VOID – Lastly comes another vape pen that’s actually manufactured in Germany. We’re not really sure why V2 added this style of vape pen to their products, but it does produce pretty good vapor, and looks like a traditional vape pen. Check out our review.

Now that’s a lot of products, so let’s now look at the original V2 Cigs product:

Clad in the company’s gray, sleek blue, and white branding, V2 Cigs Ultimate Starter Kit is packaged in an impressive box. It is constructed in a robust fashion, with a magnetic clap for keeping the box intact. From just how the box looks, you can read V2’s DNA of quality. Inside the box is a card board cover framing three batteries, which are held by a plastic mold. The cover can be lifted to unveil a collection of accessories in different compartments. It is a guarantee you will fall in love with the box at first sight. V2 cigs are manufactured based on the industry-standard specifications, hence, they are compatible with many other brands on the market. Aesthetically, V2 has gone beyond the normal to give you a sci-fi like appearance. The pieces fit together in a seamless fashion, leaving four small gaps for airflow. The product has a solid construction in addition to the distinctive branding on all the accessories including the battery and cartridges. As you would expect, the LED lights in accordance with your inhalation and dissipation rhythm.

Just as stipulated by industry standards, V2 has manufactured its e-cigs cartridges with five nicotine levels:

If you are trying to get off nicotine addiction, these five steps will be a great aid in your journey. From the lightest to the heaviest of smokers, the nicotine range level will satisfy anyone. Previously, the strong option was not available, but now even the heavy smokers have something to take home. On the other hand, the zero option will be vital for those in need of the sensory experience once they free from nicotine.

When it comes to vapor production, V2 cigs are almost similar to a tobacco cigarette. Especially when you prime the automatic battery or use the manual battery, you can produce thick clouds of vapor. The hit on the throat is satisfactory, but most importantly, it is smooth so that you do not get irritated over time. Similar to most e-cigs, manual batteries are better in vapor production, but the backside is that frequent charging will be necessary. Even if you are a heavy tobacco smoker and considering starting vaping, V2 e-cigs will not be a disappointment. Of course, since the vapor in e-cigs is cool, the throat hit might not be very similar to a typical tobacco cigarette. Nevertheless, because the smoke is as thick as fog, your sensory cravings will be quenched. Anyone who has used e-cigs before will attest to this fact. In vapor production, the capabilities of V2 cigs are unmatched by most brands.

Apart from the above collection of flavors, the company offers customization options for customers who order 100 or more cartridges. This custom offer comes with additional simulations of many cigarette brands in addition to numerous cocktails, fruits, and deserts. Due to the limitation of well-known cigarette brands, the Sahara has better ratings than the Red Blend. Congress is loved too, and its difference with Sahara will depend on personal preference. Among the minty varieties, Menthol is the strongest, but Peppermint is unparalleled if you want a pleasant vaping experience. Things are even more interesting among the fruitier flavors. Again, the difference between vanilla and coffee is all dependent on personal preference. Cherry is the most accurate flavor in the sweet collection, and the complexity of the flavor is unfathomable.

Such is an excellent collection of flavors; it is hard not to find something that will work for you. Importantly, before shipping pre-filled cartomizers and e-liquids, the company performs rigorous tests. Consequently, the customer is guaranteed of a superb taste.

On both the manual and automatic e-cig, the battery life is more than enough. The standard length can go up to 200 puffs while the long one can sustain 300 puffs. Such an amount of puffs should keep you going for a whole day. As stated earlier, the manual battery will battery will drain faster than the automatic battery. When the battery is empty, just screw the device to the USB charger, and it will keep you going for extra hours. If you are a heavy user, carrying the spare battery or getting yourself a portable charging case will ensure that you never lack something to vape. The pen-size e-cig is a little limited in the battery department, but the company has covered their customers with accessories and spares.

As mentioned earlier, V2 has been in the industry since 2009. Over the years, the company has ensured there quality is not questionable. Evident from how their product works, the company takes no second guesses. During the manufacturing process, every component is tested to the limits before being sold to the clients. Similarly, all their e-liquids are chemically tested, and customers can access this test reports. V2 has a lifetime warranty; a proof of how confident they are in their manufacturing process. However, to avoid abuse of the provision, the company covers five replacements which do not include consumable products like disposable e-liquids of cartridges.

Clearly, from the above V2 cigs review, it is almost impossible to criticize V2 Vapour2. Some reviewers have sighted that the company could have provided a higher nicotine level for heavy smokers and that the lifetime warranty is not good enough, but none of these issues is fundamental to the e-cig. Realistic throat hit, thick vapor, depth of flavor, quality construction, a wide range of accessories and long battery life are all good qualities that are hard to fault. All said and done; V2 cigs are just an excellent choice!

Use our link to get the best deal!