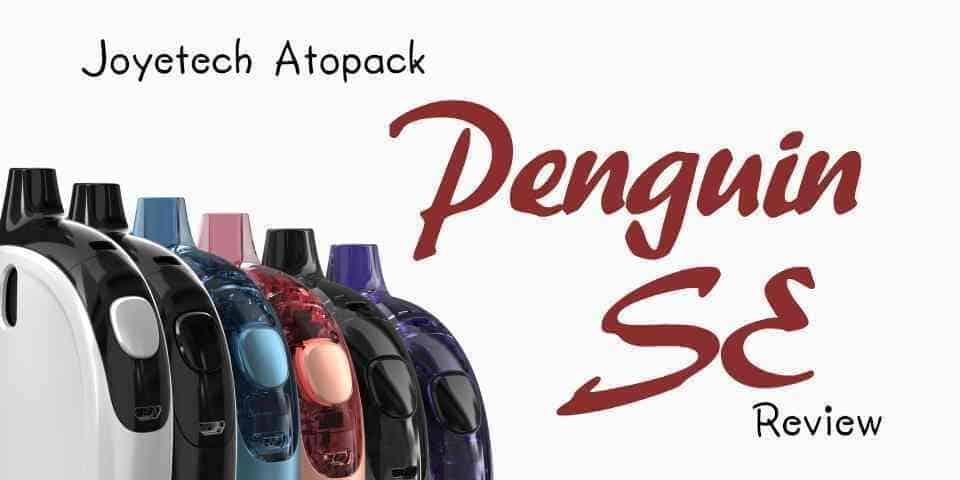 The original Joyetech Atopack Penguin was a bit of a surprise hit but had its problems, so in Joyetech’s wisdom, they decided to release a special edition (SE) version. But what’s so different with the new Atopack SE, and is it any better? We take a look to see.

Well at first you see hardly any difference with the new SE, side by side they look identical but there are some subtle differences. The new SE has a plastic body making the whole thing considerably lighter at just 102g in comparison to 139 grams. There is a fill window now on the side to make it easier to see your e-liquid levels in the tank. The fire button is now in white so it’s easier to see. Apart from that, identical, the same dimensions of 26.5mm width by 52mm wide and 102.5mm tall!

The Atopack SE is an all in one kit, so it’s meant to be simple to use and understand. There are no settings to play around with, just a battery indicator, a fire button, and a juice viewing window, that’s it.

The airflow is exactly the same as the original model, unfortunately, it’s not adjustable. It also uses the same 8.8ml cartridge system. Now if you live in Europe where the TPD is in force, you may notice a rubber stopper inside the cartridge which reduces the capacity to 2ml, if you remove this stopper though then you get the full 8.8ml capacity!

To turn the device on its 5 clicks of the fire button, where the battery indicator will flash 5 times and then shows the battery life. It does have a pretty good 2000mAh internal battery built in so should last a decent amount of time considering the low output wattage of 50W in comparison to some of the top vape mods. It has 2amp charging which is pretty good for a vaping device and charges pretty fast.

At the bottom of the cartridge are 2 holes, the middle is where you fill your e-liquid, the one to one side is the airflow, so avoid any of your juice getting in there.

Be sure to check out our vape deals page where we report all the latest deals on this and other mods on the market.

To be perfectly honest the differences between the original and new Joyetech Atopack Penguin SE are so slight it’s hardly worth the new name. Some may believe the differences are worthwhile, but as far as performance is concerned, there are no differences. It’s the same device!

You can read our original review of the Joyetech Atopack Penguin to get a little more information on the performance, but it’s really not worth repeating it here!

As we’ve said many times in this review, the differences between the original Atopack and the SE version are so slight you hardly notice them. The performance is the same and the design is almost identical. That said, it is still one of the best e-cigs on the market if you’re after a simple to use and relatively good performing vape product.

Yes, the slight changes are an improvement, and we mainly talking about the viewing window so you can easily monitor your juice levels and the 40 grams of weight they’ve saved by using a plastic body.