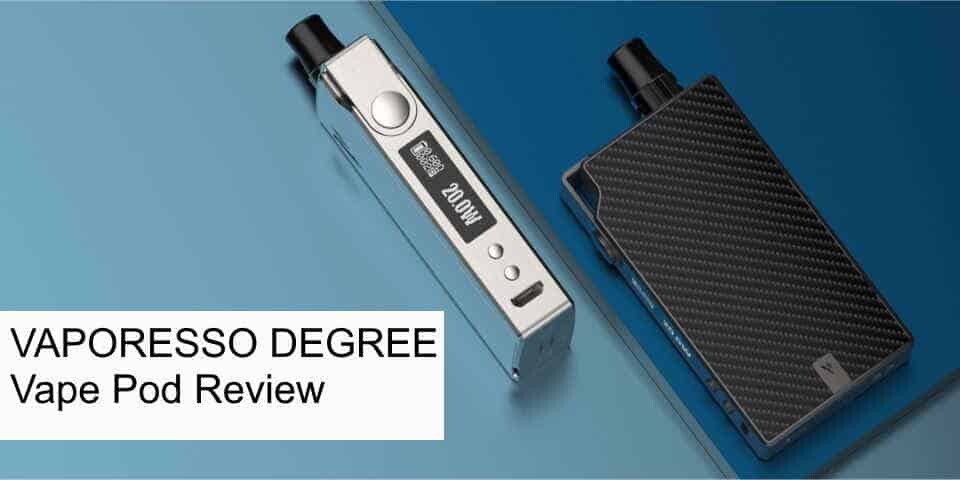 Vape pods, as your probably aware, are extremely popular right now, especially with new vapers. One distinct advantage of these vape and e-cigarette devices is the size and ease of use. But, that said, they come with their problems. One such problem is the power is relatively low, and therefore experienced direct lung vapers find them hard to get used to. Vaporesso has produced the Degree vape pod to tackle this problem with variable wattage and coils to suit both new mouth to lung vapers and experienced direct lung vapers. But does the Vaporesso Degree live up to the promise, or is it one to miss? We take a closer look at this vape pod to find out.

One thing that is obvious when you look at the Vaporesso Degree is that they have paid extra attention to the ergonomics, this vape pod is beautiful and small. Measuring in at just over 90mm tall with a width of just over 41mm and a depth of just over 16mm this pod will easily fit in your pocket, and you won’t even know it’s there! For the size, it has a reasonable size pod that is refillable and can hold up to 2ml of juice.

As you can see from the picture above, the front of the device holds the firing button, a small screen which allows the user to monitor the battery life, see the current wattage along with the resistance of the coil and a puff counter.

Vaporesso are releasing the Degree Vape Pod is a number of designs and resign covers which include a Marble black and white design, a lava yellowish design, a red marble design, a blue marble design and a couple of standard silver carbon and grey carbon design, so there is plenty of choice.

One of the key features is the variable wattage ability, which is pretty scarce in small pod vapes similar to the Degree. Simply use the up and down button to select the wattage you want, when selected you can click the fire button 3 times to lock the device, making sure you don’t accidentally adjust the wattage when you’re carrying it around. The wattage control can be adjusted from just 5W all the way up to 30W.

This is still pretty low wattages in comparison to some of the best box mods for example, but dues to the small coils and low resistance it still produces some decent clouds for direct lung vaping. Also coupled with the internal 950mAh battery, the low wattages extend the battery life making it possible to use all day on a single charge.

Another cool feature that Vaporesso has added to the Degree device is the refill valve located at the top of the device, next to the mouthpiece along with a nice notification system which is displayed on your screen when the e-liquid is at a low level. The valve on the top of the vape pod gives the user the ability to simply push down with the e-liquid bottle (to open the valve) and squeeze to fill the tank, without having to take anything apart or unscrew/slid a fill cap. This is pretty cool, but you do have to take the side off to see the tank and know when to stop refilling. It would have been nice to include some kind of window here to make it a little easier.

You can flip the screen if you wish by holding the fire button together with the up button, this can only be done if the buttons are unlocked though (to lock/unlock the device, you click the fire button 3 times).

One clever feature included in the device is the dry hit protection. This is great as every experienced vaper has experienced a dry hit and there’s nothing worse, as well as burning out your coil. The idea here is it uses the temperature of the coil to monitor the coil, and you can adjust the sensitivity. To do this click both the fire button and up button, then use the up and down button to select the sensitivity. Just a note, this feature is switched off by default.

The last feature we need to mention is the airflow control. Due to the lowish power, the airflow is reasonably restricted, so the adjustable airflow slots are small and located at the base of the mouthpiece. Most vapers have the airflow fully open, but you can adjust it depending on your needs.

We have to be honest, when we first received this device we weren’t expecting much, but this vape pod surprised even us with the performance.

As experienced vapers, we mainly use direct lung inhales and as such chose the mesh pod for the initial test. With this coil, it required slightly higher wattage at around 20W compared with the CCell pod which us best used at around 10W.

With the airflow fully open we were taken back with the cloud content. Granted it’s not going to compete with the larger, more powerful mods, but as a vape pod it was extremely impressive. The taste from the mesh coil is good and the vape is pretty satisfying for the experienced vaper, meaning a new vaper is going to be pretty pleased with it.

The features, adjustable wattage, adjustable airflow are all plusses, although we would recommend using slightly stronger flavored e-liquids to get the most from this device.

The Degree Vape mod does have a slight airflow resistance, which is necessary for low powered, small pod devices, but Vaporesso have designed something here that is going to compete as one of the best vape pods on the market.

The Vaporesso Degree vape pod kit is one of the best, if not best vape pods you can buy at a reasonable price. The features are cool and with adjustable wattage and airflow allows the user to adjust the vape to suit them. The mesh coil produces a nice cool, slightly resistant vape with a nice flavor and good cloud content.

The size and design of this vape pod is outstanding, making it super easy to carry around with you and use with the minimum of fuss. Great job Vaporesso.