How To Choose The Right Battery For Your Mod 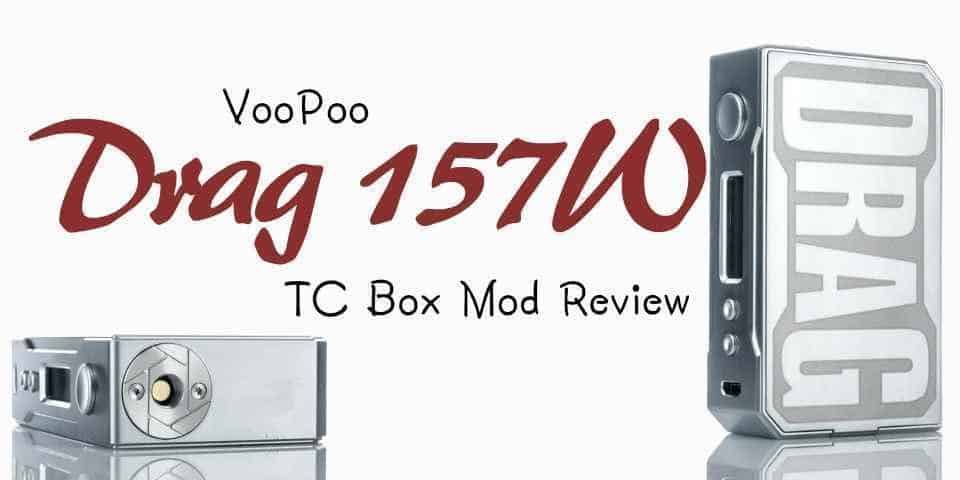 Don’t get hung up on the company’s name. Instead, focus on the product, because it’s worthy of your attention. In this review, we’re going to take a look at the Drag 157W TC box mod from VooPoo (you were warned about the name!). Given its rich set of features and powerful capabilities, we think it’s one of the best vape mods in its class and that you’ll be impressed enough to want to try it out for yourself. So, without further ado, let’s take a look at this new product with our VooPoo DRAG 157W TC Gene Chip Box Mod review.

Update November 2018: Voopoo has just released a couple of new version of the original Drag, the Voopoo Drag 2 and Drag Mini that you might want to check out!

Let’s get the design out of the way up front. This is a relatively small device, powered by two 18650 batteries. It comes in only two color options, silver, and black or silver and red. That’s a bit of a disappointment, of course, and I’ll always wonder why more companies don’t opt to give users a wider variety of design choices.

This is one of the boxier designs to come out in recent years. While other products seem to have standardized the rounded-edge look, the Drag looks and feels like the box mod that it is. This hearkens back to the earlier days of the box mod craze, which gives it kind of a retro feel. And, as nice as high-tech and sporty designs might be, I’ve always appreciated the classics. This has that kind of design.

You will eventually have to get used to the company name, of course, as it is emblazoned on one side of the chassis, in small letters. It adds another classic touch to the design. The Drag logo is the largest identifier and appears on the battery door in large text. Overall, those logos feel right at home, and their placement does nothing to detract from the aesthetics.

The batteries are kept in place with magnets on the door. As I’ve said elsewhere, this is a feature that we really appreciate, and we hope that it becomes a standard for the industry. Unlike most latches and other door closings, the magnets can offer greater longevity without the wear and tear worries that often arise with inferior designs. Eventually, we suspect that magnets will be the option of choice for pretty much all of the best vape products, well, where appropriate!

There is also the standard USB port that you need for charging, and solid fire buttons and control buttons to manage device settings. Those settings offer the user flexibility that includes:

That chip also provides a host of security features that will protect you by ensuring a timeout when you’ve inhaled a certain amount of time, guard against excessive heat, and prevent overcharging, short-circuit, and other common dangers like those horror stories about vaping explosions which are just ridiculous by the way! These types of protections are often neglected in reviews of products like these, but they’re important features to learn about.

It’s important to note that this device also allows you the option of using a computer interface to customize settings for vaping and temperature curve. Rather than just use preset curves, you can create your own – simply by connecting your device to your computer and using the software provided with the Drag. That’s a really impressive feature, and should be attractive for hobbyists and those enthusiasts who are really selective about vape settings. It only works with Windows operating systems, though.

We really liked the boxiness of the devices. That’s something that you’ll have to decide for yourself, however, it’s not really a mod for those who are looking to quit smoking through vaping, but for those who want to improve their vaping experience. The really important thing is that we were thrilled with all of our test runs with different builds. We managed to get consistent wattage at different temperature settings, and captured huge clouds. At the same time, we maintained flavor and had some of the best group vape sessions we’ve enjoyed in quite some time. Any box mod that can provide our test group with that kind of memorable experienced deserves a bucket of thumbs-ups.