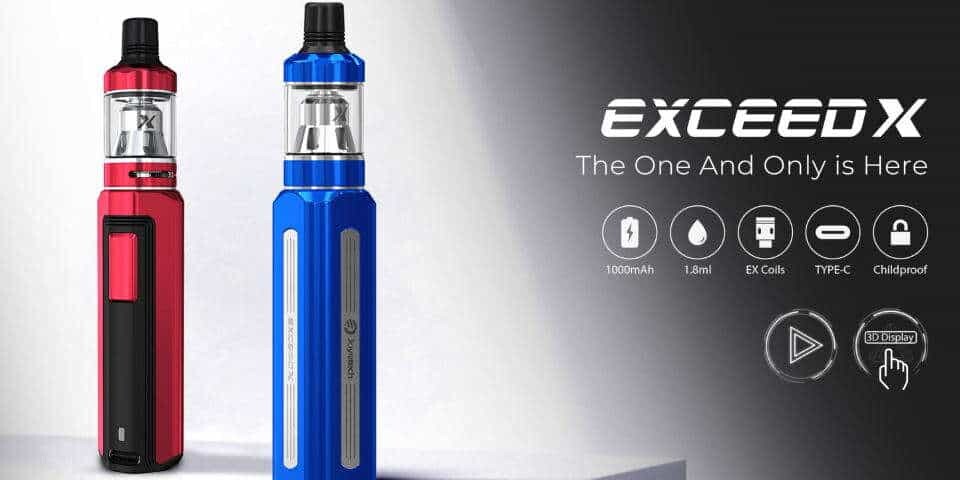 Joyetech has released the Exceed X to give restricted draw vapers, what they believe, the ultimate experience in vaping. This tiny box mod like e-cigarette is competing in a crowded market and has a lot to live up to. Joyetech is one of the original electronic cigarette companies to offer products to the market, but as other vaping companies have injected into the market they have been somewhat left behind. Concentrating mainly on the new/intermediate level of vapers, Joyetech is bouncing back with the release of the Exceed X. We ask the question if this is going to put the name Joyetech back in the community as one of the best manufacturers around, or another failed attempt at re-energizing the company. Read our full review to learn more.

The first thing you will notice when opening the Joyetech Exceed X is how small it is! Measuring in at just over 117mm tall, which includes the tank and a width of just 23.4mm makes this question if it will produce any type of decent vape. They are releasing the Exceed X in a number of colors which includes black, blue, green, red and silver, all having a shiny metallic look, so you should find one to suit your taste. It does also feature a silver plate on two of the sides with Joyetech written on one and Exceed X written on the other.

The main body design is of a cuboid shape, which is a little different and for some reason, they have the fire button located on one of the corners. All corners have been rounded off, so it actually works and feels really good in your hand. The tank is typically cylindrical and matches the color of the base. Overall the look of this device is really pleasing, it looks a little different than normal box mods, and it certainly is small!

The Joyetech Exceed X has really been designed to suit new vapers, so the features are rather lacking. In fact, you only have one button that’s used for either firing the device or clicking 5 times to turn the device off.

One of the best features is the ability to adjust the power settings. It has 3 in total and indicated by the LED’s color, the red represents low power, blue for medium and green for high power. You can switch between these power settings by clicking the fire button 3 times, the led will then blink 3 times to show you which setting it is on.

The LED also has another function and that is to inform you of the battery status, when firing the device it will go through the traffic light sequence from green meaning fully full, blue and then red, which means it needs recharging.

Although the Exceed X is tiny, it’s actually quite impressive that Joyetech managed to squeeze in a pretty decent integrated 1000mAh battery which can also be recharged in just 30 minutes with its fast 2A built-in charger. You won’t really appreciate that until you see the size of the device, but that gives us hope that this device is going to be more powerful than it looks.

As standard these days, Joyetech has also included a number of safety features which include overcharging, over-discharging and short circuit protection.

The Joyetech Exceed X despite is small size is actually compatible with 3 coils, the EX 0.5ohm Coil, the EX-M 0.4ohm Coil for direct lung inhale vapers and the EX 1.2ohm Coil, for new and mouth to lung vapers. Have to say this is a bit of a surprise and can’t wait to check out how the direct lung (sub-ohm) coils perform.

So for our initial test, we are using the 0.4-ohm mesh coil, which has been primed and turned the power to green (high power). We’ve also turned the airflow fully open to maximize the vape cloud.

For an experienced vaper, they are not going to like the restrictive airflow, even when it’s fully open, but as this is a low powered device it is necessary to produce a vape. The actual direct lung inhale vaping is a little bit of a letdown. There is a slight subtle taste coming through, but it’s probably best to use the more prominent tasting e-liquids in this device.

Switching over to the 1.2-ohm coil and adjusting the power to medium, the device seems to perform a lot better. Taking long mouth to lung inhales brings the flavor across a lot better and gives you the satisfaction new vapers are seeking.

The Joyetech Exceed X is designed for new vapers and smokers who want to give vaping a try, and we have to say that for this, it performs pretty well. If your an experienced vaper, however, and looking for a small device to carry around with you, the direct lung inhale, sub-ohm coils are a little bit of a letdown, due to the low power settings.

The design and usability of the Exceed X is outstanding, it looks and feels great along with all the safety features you could hope for. Overall this device is perfect for a new vaper but lacks in performance for more experienced users.