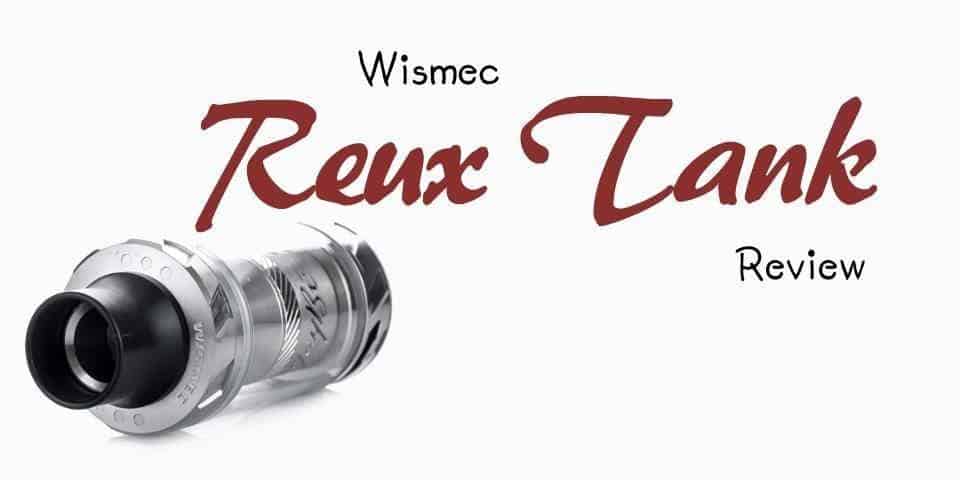 The Full In-depth Review of the Wismec Reux Tank

Serious vapers are already familiar with Wismec. The company makes some truly impressive products, with the RX300 being one of its more well-known offerings. In fact, many people consider Wismec to be one of the innovation leaders in the industry, and diehard vapers often seek out these devices to stay up on the latest trends. Their prices are fair and you can usually rely on their products to deliver what they promise. With that in mind, we were excited to review the Wismec Reux Tank. Can it live up to the expectations we usually have for this company’s offerings? Let’s find out!

First, let’s note that the Reux was apparently designed to appease a broad cross-section of the vaping community. It’s a sub-ohm tank with flexible options that can appeal to everyone. Its design permits the use of pre-made coils, which is something that should satisfy that large segment of the vaping world that doesn’t want to mess with building. At the same time, however, there are three different deck configurations available -and that should be exciting for hobbyists who get a kick out of building custom devices. That’s flexibility that you don’t often see with affordable tanks.

The tank is also huge – a whopping 6 ml of liquid capacity can fit inside its storage area – and that’s something that will satisfy vapers who want to avoid the need for constant refills. It’s a sturdy design, incorporating two reliable materials in its build: Pyrex and stainless steel. The manufacturers also chose to use the Delrin drip-tip, which should appeal to fans of that sleeve.

Now, there’s nothing that really stands out about the overall configuration of this tank, as its design is really pretty straightforward. Some might even call it pedestrian, in fact. But that tank capacity is such an important feature that it’s hard to argue with the decision to go with the more traditional build. On the plus side, this is an easy tank to clean, as it disassembles into six different components. In addition to the airflow base, there’s also the Pyrex glass tank, the RX coil head, the chimney and fill port section, the cap, and the mouthpiece.

Airflow wasn’t a problem in our trials, and that’s no doubt due to the sheer size of the airflow holes. Those slots are adjustable, and can really open wide for maximum airflow! Airflow holes are at the base, which is a popular choice in many newer unit designs. Every other component is designed for easy assembly and leak-proof use.

This tank works perfectly well with the WISMEC Predator 228 as it was designed to, we tried it at 200W and for us, the vape was too warm but it handled it well! The specs state that the tank can indeed cope with up to 230 Watts, but there are only a few vapers who we known like to vape this high. You can, of course, use your own mod or any other of the best box mods on the market as it is interchangeable.

We tested the tank with the Reuleaux RX300, because this tank was reportedly designed to serve that mod. In our tests, we used a 70% VG e-liquid so that we could get a better idea about the tank’s versatility as we put it through its paces. Different wattages gave us dramatically different results, but that’s typical for most tanks these days.

For example, our lowest wattage vaping was around 45, and that seemed to produce some nice vapor when we limited the airflow below the half-open mark. That setting also helped to preserve the flavor of the juice and made for an enjoyable vaping test. Wider airflow did nothing for us, as it caused the juice flavor to be too dispersed for our liking.

Higher wattages did thicken the vapor considerably, but the device produced a vapor that was just too warm for my liking. Granted, I tend to use extensions to put some distance between my mouth and the mouthpiece, but even with that aid, the heat was just too much. Your mileage may vary, of course, and some vapers really love that warm sensation.

The tank is a workhorse, but users shouldn’t be fooled into thinking that the 6-ml capacity means that they can avoid refills. At sub-ohm levels, you can still burn through that liquid in what seems like no time at all. Yes, it’s a thirsty device! On the plus side, though, I didn’t experience any problems with the wicking and suffered no burnt hits at all. That’s impressive, to say the least.

Check out our other tank reviews to see how it compares with the best.

I do recommend this tank for people who are committed to chasing clouds of warm vapor. In fact, I haven’t encountered many tanks recently that can beat the Reux in that department. I would recommend vaping at lower wattages, unless you’re totally comfortable with really warm vapor.  Because of its vapor production, however, the Wismec Reux Tank is a component that many vapers will be proud to add to their collection. Check out our list of the best electronic cigarettes here.