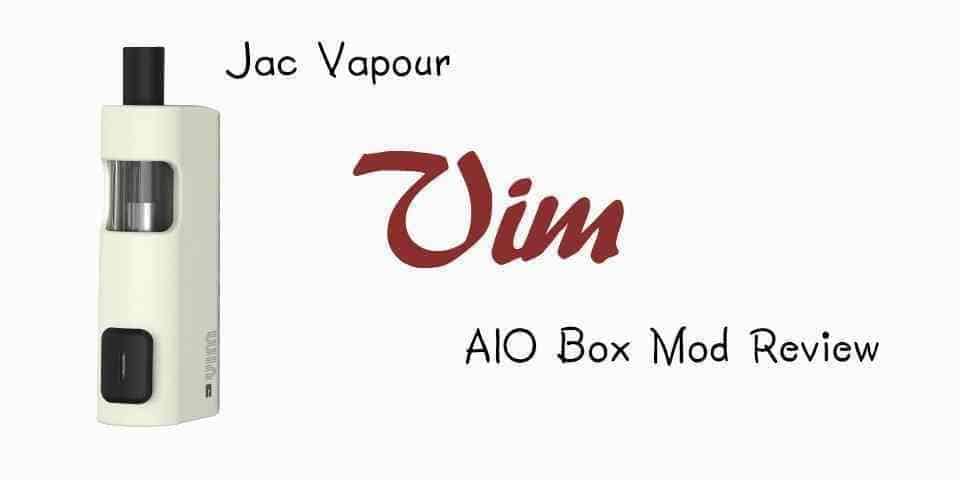 Jac Vapour is one of the biggest brands in the UK and now they are releasing a new all in one (AIO) box mod kit named the Jac Vapour VIM. So how does the new mod compete against the best box mods on the market, and who does it really suit? We take a closer look to see.

The design of the VIM is based on a compact concept with a built-in tank. This means the only protruding part is the mouthpiece. Of course, this type of design means the battery capacity is going to be relatively smaller than similarly sized mods, but Jac Vapour has still managed to cram in 2600mAh of power!

On the side, the VIM has a cutaway area in the body where the 2ml tank is housed, meaning you can easily check your e-liquid levels. Below the tank area is a slightly oversized fire button to make it easy to find. The other sides are completely free, except the front which houses the VIM logo.

The base of the VIM holds both the USB port to allow charging, but also, and very different to other box mods, it is where you will find the airflow setting for the tank! The airflow basically has 2 settings, wide open for direct lung inhales or using the rubber stopper to restrict the opening, for mouth to lung inhales.

You do need separate coils for each style of vaping, a 1-ohm coil for mouth to lung and 0.42-ohm coil for direct lung inhales, so make sure the airflow is set according to the coil you are using to get the most out of this mod kit.

The Vim AIO kit measures in total, 90mm tall, which includes the protruding mouthpiece, (76mm tall without it), 40.5mm wide and has a depth of 20mm, so you can tell this is a small mod, which makes it perfect for carrying around with you.

At the moment, Jac Vapour is only offering the kit in one color, as shown in the pictures, white with a black button and a matching mouthpiece. We’re not sure, but expecting more colours to be released in the coming months.

To remove the tank, push down on the mouthpiece and twist, the tank can be removed completely for cleaning or changing the atomizer. Simply unscrew the base of the tank and screw in your atomizer. You can then put your tank back into the mod by pushing down and twisting as earlier, but make sure the 3 protruding lines, which acts as grips on the tank are at the front.

To fill the tank unscrew the mouthpiece and you’re presented with 2 fill holes, which is great as it allows the air to escape without leaking e-liquid everywhere.

There are no other settings like wattage control, but you do have a battery indicator represents by a coloured light on the fire button.

We starting out with the 0.42-ohm with the airflow wide open and using a 70% VG e-liquid. With such small coils, we are a little worried about how quickly it will wick. The last thing we want is a dry hit.

Completing 5 draws one after each other, the VIM is actually performing really well, and our concerns about wicking are no problem whatsoever! Their coils are certainly up to the challenge.

The flavour produced is also really good, they have used their experience well to produce a good tasting vape, on par with the top manufacturer and competes with all the top vaping products on the market.

The vapor produced, when using direct lung inhales is also very good, if you like seeing big clouds when vaping then the VIM won’t let you down. Obviously, this is significantly reduced when using the 1-ohm coil and mouth to lung inhales.

Overall we were really happy with the performance of the VIM all in one box mod from Jac Vapour. A good tasting mod with relatively decent airflow, considering there are only two settings and also a good vapor production.

No leaks were evident when vaping this mod, but if you’ve vaped before, you may feel it is a little restrictive, it would have been nice to see some wattage control. But that’s not really what a new vaper is interested in. Also, the slow discharge of the battery will reduce the vape over the course of the day.

Therefore we can highly recommend the Jac Vapour VIM for new vapers, or those looking at e-cigs to quit smoking. But if you’re an experienced vaper, you may find it a little underwhelming the longer you vape it as the battery discharges, with no control to increase that power.