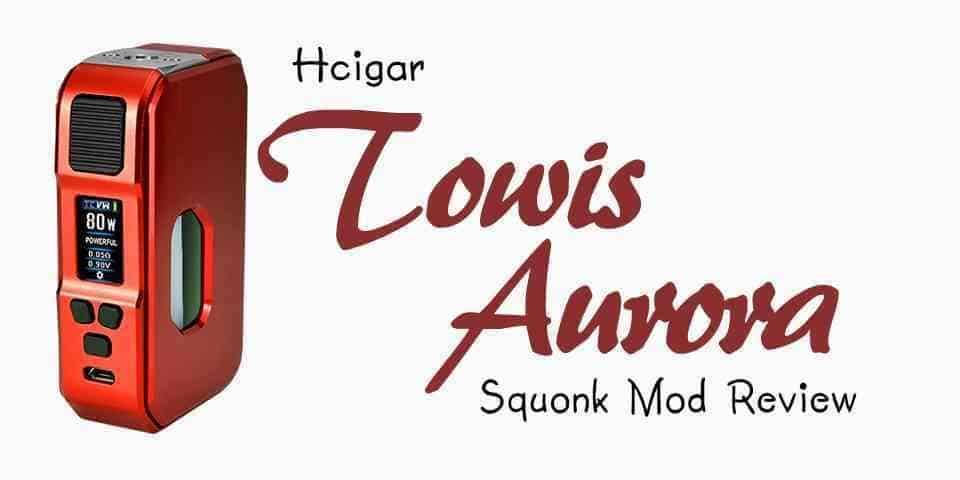 HCigar is a manufacturer that has been building mods for a long time; their products include the VT series which use the famous EVOLV chips, the Towis Series using their own developed chip and a whole series of Squonk mods, pods and atomizer tanks. Now they are releasing a new product, the Towis Aurora Squonk mod which is a regulated squonker capable of power from 5-80 Watts using a single 20700, 21700 battery or a 18650 battery with the use of their built-in adaptor. So how does this regulated mod compete against other squonk mods or even the best box mods? Let’s take a look to see.

The first thing you notice is the size, it’s a little larger than other single battery squonk mods, measuring in at 27.5mm depth, 57mm wide and 92mm tall. That said there is a reason for the slightly larger size.

The design is brushed aluminum coming in 3 colors initially; black silver or red, with a window to reveal the squonk bottle off the side. The squonk bottle is made of soft silicone and can be interchanged with other bottles. You also get a spare harder plastic bottle, should you prefer that.

On the side has a slightly larger plastic fire button, we don’t really like the feel of it, but it does its job. Below the fire button is the color display and below the screen is the up, down and select buttons. Below the buttons is where the USB port is housed for charging and firmware updates.

The top features a slightly off center 510 thread that is not spring loaded but housed on top of a silicon washer so has a little play. The top also has a beveled edge making and tanks greater than 25mm have a slight overhang.  This beveled edge continues around the edge of the entire mod. Granted, it’s not the best e-cigarette as far as the design is concerned, but it fits comfortably in your hand and all the buttons are easy to operate.

The side doors are removable, and although some report slight defects, the ones we received has no such markings, so it looks like HCigar has sorted this out on the production models. The doors do protrude slightly, but we think that’s all part of the design and doesn’t affect the look at all. Both doors are held in place with magnets and feature a slight indent at the bottom for easy removal, HCigar has also improved the fit of these doors on the production models.

Removing the sides of the mod reveals the battery housing where you can place either a 21700, 20700 battery or, if you remove the back panel and slide the adaptor across, it can house a regular 18650 battery.

Because of this in-built adaptor, the bottle is on the small side, capable of holding 6ml of juice.

The chipset uses the 5 click on feature, but 5 clicks when the device is on only locks the device. The screen shows all the important information you need like the mode, current wattage, vape strength, resistance of the coil, voltage and an area for setting the timer, brightness of the screen, automatic off timer, the language and info about the device.

The accuracy of the chipset is pretty good, pretty much dead on at resistances above 0.2ohms. Anything below is slightly out by a few watts, but nothing to grumble about.

In temperature control mode, the temperature is a little cooler than other more accurate mods, but it’s hard to tell. Finally, the responsiveness of the mod is performing really well, pretty much straight away with a short delay recorded at 8 milliseconds, so overall a great performing mod.

Setting it to 240 degrees Celsius at 45 Watts with a single stainless steel coil on the WoToFo ReCurve RDA works perfectly. The tank sits flush and the temperature control is doing everything we expect it to!

Despite the plain looking mod, the HCigar Towis Aurora Squonk is packed full of all the features you find on a regular mod, but the performance of a highly rated device.

Overall really happy with the vaping of the squonk mod, the ease of use and the built-in adaptor is a good idea which allows 20700, 21700 and 18650 batteries, although you do pay with a slightly smaller bottle capacity. Obviously this type of mod is not for the complete beginner, and is certainly not the best e-cig to quit smoking with, but for vapers who want to make the use of RDA’s a little easier then squonk mods are for you, and if you want all the functionality of your favorite mod, then possible the HCigar Aurora Squonk Mod is perfect!