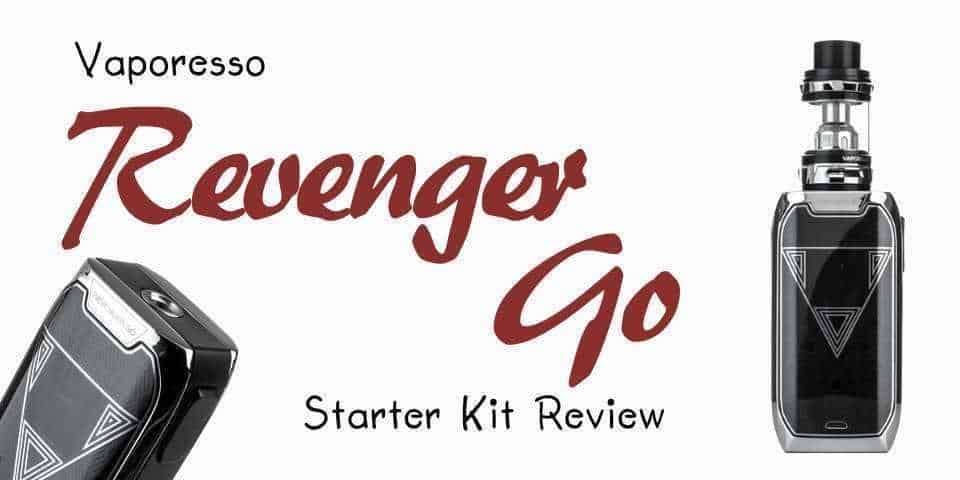 Vaporesso has released another starter kit in their Revenger model range known as the Vaporesso Revenger Go, so what’s so different with this vape mod and is it an improvement to their popular model. In this review, we will take a look and compare it to all the best vape mods on the market.

The reasoning behind the name GO is that it has a built-in battery, now, some people hate built-in batteries because you don’t have spares to plug in when they go flat, but, with a 5000mAh built-in battery, the chances of it lasting all day are greatly increased. This also gives the benefit of producing a smaller and more aesthetically pleasing design.

This new design features only one physical firing button and three responsive touch buttons to adjust the menu settings. With a lovely, huge, 0.96 inch screen on the front to see all the data one needs when vaping and the new OMNI Board 2.2 chipset makes this mod a dream to use with a classy and charismatic look and feel.

The 5000mAh battery has the capability of firing from 5W all the way to 200W, which covers the majority of vapers requirements. We tend to vape around 80W depending on the resistance and number of coils in the tank.

It has something called smart variable wattage mode where the mod will actually automatically recommend the best output for the coil that is installed in the tank. This is a great feature for new vapers, and they can adjust it slightly if they wish.

Also the Vaporesso Revenger Go features all the other new and old specifications like Customized Curve of Wattage (CCW) where the user can adjust the wattage for every second the fire button is pressed, a whole temperature control suite for the different type of coils as well as a bypass mode to use the mod as a standard, non regulated mod.

Overall, thanks to the new OMNI Board 2.2 chipset this mod is not short of features. We would have liked to see the boost or turbo button as featured on the Council of Vapor XION kit that we just love, but I guess that will come in a later release of this model!

Within the Vaporesso Revenger Go starter kit comes the very popular and much raved about NRG Sub-Ohm Tank. It is a top fill tank which is accessed by sliding the top cap to reveal the large fill hole, making it easy to refill your tank with juice. This is now becoming standard across all tanks.

The tank has the option of using 5 different coil heads ranging from 0.15-ohm to 0.4-ohm and having between 1 large coil to 4 smaller coils, this is becoming quite common in the best tanks and features quite a lot in our list of the top 5 sub ohm tanks. Within the kit however you are only given the GT 4 which is a 0.15-ohm dual coil head and the GT 8 which is also a 0.15-ohm but a quad coil head.  This is probably the most common resistance and gives the user the appreciation between dual and quad coils.

The tank also comes in 2 sizes, the 2ml capacity to meet the EU’s TPD requirements and the standard 5ml capacity for the rest of the world.

Well, if your new to vaping and looking for an e-cig to quit smoking there are possibly better options on the table for you, but, if your looking for an upgrade with a host of features and a good performance then the Vaporesso Revenger Go needs to be considered.

The tank performs really well with the 2 coils supplied in the kit, producing some great flavors and nice smooth clouds. The 4 coil head works a lot better at higher wattages and produces a slightly warmer vape as a result.

The Vaporesso Revenger Go starter kit is a beautifully designed vape mod kit that is providing competition to the best e-cig and vaping manufacturers and models like SMOK.  It’s hard not to like this vape mod the only real downside is the built-in battery, but on the flip side, you do get 5000mAh and an upgradable OMNI 2.2 chipset giving you more features you could possibly use or need, including a rather pointless screensaver!

Overall a great mod to keep vapers happy and other manufacturers worried!