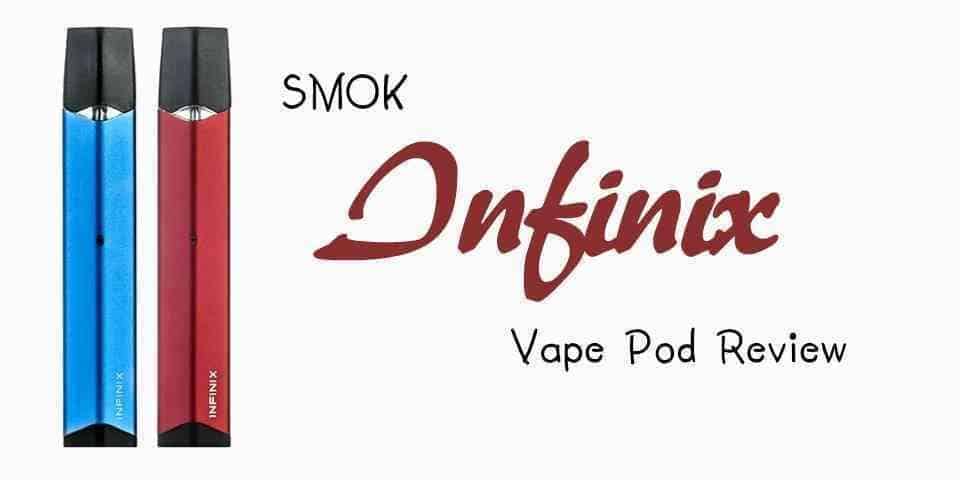 Pod systems seem to be all the rage these days, especially for new vapers and seem to be taking over the choice of best ecig to quit smoking with. So Smok who is one of the top manufacturers has decided to join the competition and release some pod systems of their own. Possibly their greatest model on the market, at least out of the best pod systems is the new Smok Infinix. So let’s take a closer look to see how well this pod vape vapes!

You have to hand it to Smok, the Infinix looks amazing, small and smart 3 colors available including red, blue and gunmetal. Measuring in at just 110mm tall, just under 20mm wide and a depth at its largest point of 11mm, this pod vape will be perfect to slip into your pocket, without you even knowing it’s there.

Smok has designed this pod to be used with any e-liquid of your choice, which is just great as you’re not tied into buying expensive pre-built pod replacements like you are with other systems on the market like the Juul we reviewed a couple of months ago. This may be a little off-putting to start with for absolute new users, as you have to buy your own e-liquid, but in the long run, it works out a lot cheaper.

The design of the Infinix consists of 2 parts, the main body where the battery is housed, which has an LED battery indicator halfway down the shaft, and a USB connector to recharge the battery on the base. The second part is the pod, which has a removable rubber stopper covering the filling slot, obviously to fill with your e-liquid and a built-in mouthpiece and atomizer. This means that when the vapor stops producing you need to buy new pods. Luckily, Smok gives you 2 pods in their starter kit which should last around a month, depending on how much you vape.

Being a simple pod system you’re not going to be presented with a whole host of settings to adjust the vape. It comes simply with a built-in 250mAh battery, which might be a little on the small side, but should meet all vapers requirement for an all day vape.

It does have an LED indicator that we said before, giving you a visual on the battery life.

But what you do get is the piece of mind, with an 8 second cut off feature, short circuit protection should the vape pen develop a fault and low voltage protection again to protect itself from damage. Basically, low voltage protection cuts off the device, if you didn’t have it and you tried to use the device with too low of a voltage, some components will fire and some won’t which may cause damage.

The Infinix uses an automatic air driven system that can sense when you vape on the device to fire it, so no pressing of fire buttons is required. Just vape on it like you would a regular cigarette.

As we said the pods themselves come unfilled but are really simple to refill. Just remove the pod by pulling the mouthpiece, remove the rubber stopper and you presented with the fill hole.

Each pod can be refilled between 10-15 times, so should last between 2-4 weeks depending on how often you vape. A good indicator of when you need to replace the pod is the lack or drop of vapor and flavor produced. They are disposable so simply throw away and fill your new pod.

They are held into position on the battery by a magnetic connector and can go in, either way, there’s no lining up, it really is that simple!

The Smok Infinix is set to its own output, meaning there’s no way you can adjust the wattage or the airflow. With the wattage working off just 10-16W don’t expect to see huge clouds or a huge vape hit.

That said the Smok Infinix does actually produce a decent amount of clouds, especially when you compare it with other pod systems, in fact, we think it produces the most clouds out of any other pods on the market.

The flavor is a little dampened in comparison to some of the best e-cigs that use bigger sub-ohm tanks or higher wattage, so it’s best to use an e-liquid with a stronger taste and not one of those more subtle juices.

The Smok Infinix was actually a bit of a surprise with a decent amount of vapor and a reasonable smooth vape for both mouth to lung and direct lung inhale vapers.

The battery may be a little on the small side, we wish they added 10mm or so on it just to make it last a little longer. The output wattage is also a little on the low side, but it helps make the Infinix last longer and the performance is actually still pretty good.

Overall a great little pod system that not only looks the part but certainly performs. Would be great for anyone trying vaping for the first time, or even experienced vapers who want a small vape system to vary around with them.