A Review Of The Best 18650 Batteries For Vaping 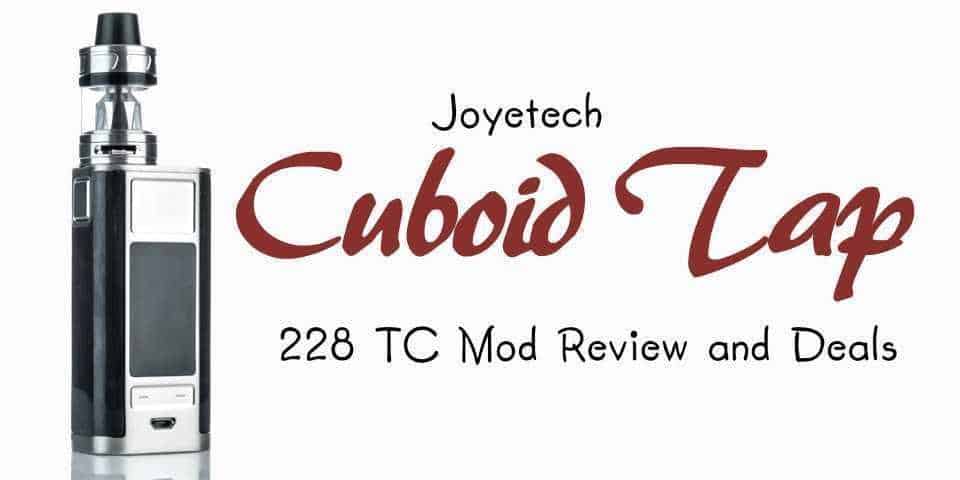 The Full Indepth Review of the Joyetech Cuboid Tap Kit

This starter kit introduces JoyeTech’s new groundbreaking Cuboid Series with their proprietary TAPTEC Technology and a pressure-sensitive control system, married to the JoyeTech ProCore Aries Sub-Ohm tank with its 4ml juice capacity. The kit contains the Cuboid TAP mod, ProCore Aries atomizer, a ProC1 (0.4ohm) head, a ProC1-S (0.25ohm) head, a spare glass tube, mini-USB cable, and spares. Let’s have a look at how it measures up to other kits in this class.

The Cuboid TAP 228W ‘s appearance stopped me in my tracks for a second, mostly due to the outrageously retro look of their silver and wood-finish model. It instantly reminded me of the heydays of the iconic Zippo lighter, which conveyed a kind of dark glamor and sheer bad-boys – and has, incidentally, become highly collectible.

The new Cuboid TAP228W is 28mm thick, 41mm wide and 134mm high. It’s not a small mod but not that much bigger than the Cuboid mini that they released prior, but the design is all flat planes and straight lines for a good grip to ensure the user can apply the new pressure control technology. They have certainly improved the mod compared to the Cuboid 200. It comes in 5 colors with vivid decorative art designs on the red, yellow and blue mods and you can match your ProCore Aeries tank colors to the color of the mod. There’s also a plain black mod, but I absolutely had to have the silver and wood-finish model!

It appears very sturdy and looks heavier than its 350g (mod and tank combined). There’s a large 1.3 inch (3.3cm) OLED screen with a crisp display including an analog clock and information about mode, voltage, temperature, amps, resistance, and battery level. The large firing button is on the side, but the adjustment buttons seem to be missing… which brings us to the main feature:

JoyeTech is one of the first mod manufacturers to use a touch-pad system in place of the standard adjustment button system. This was first introduced on their Ocular C Mod, but they went even further and added haptic feedback, which means that the mod acknowledges your interaction with a vibrating motion just like your smartphone.

There are two touch-pad areas. The top area houses the tap-activated firing button (in addition to the ‘traditional’ firing button), and the bottom touch-pad area takes the place of traditional adjustment buttons. In terms of design progression, the addition of the touch-pad system may be more important than it seems.

Smartphones and electronic gadgets are overwhelmingly built on tap-screen interaction, and JoyeTech took an important decision to build the Cuboid TAP on this type of interface. While tap-screens seem like a logical design progression, traditional adjustment buttons are very entrenched in the vaping industry. I loved the novelty, but some users may prefer ‘real’ buttons, and we’ll soon see if this design will become a new trend and start appearing on more of the best vape mods.

At first, I regarded this feature as just a ‘cool gadget addition, ’ but I realized it is handy when I found myself in a poorly lit room. Keep in mind that there is just one protrusion (a manual firing button) to help you orientate the device correctly. I was happy to find that I didn’t have to fumble around with the almost featureless mod to activate it in the dark. Just squeeze it to lock, unlock or take you to the menu function. The vibrating motion provides feedback that adjustments have been made.

Two 18650 batteries powers the Cuboid TAP for a peak of 228W. There’s a hinge with a lock on the bottom for swapping batteries, but JoyeTech has made excellent provision for fast onboard charging with a USB cable at 2A as well as a convenient bypass mode. An advanced trickle charge system keeps the charging levels in the batteries at the same level (balanced charging).

18650 batteries deliver a lot of power, and it makes sense to use the resource as a power bank for emergency recharging of your other gadgets. You’ll need to get an optional external Reverse Charge adapter (RC adapter) which fits into the gold-plated 510 connectors, and provides power via USB output. The spring-loaded 510 connector accepts a range of tanks between 4.0mm to 5.5mm deep and up to 25mm diameter.

You can lock the traditional firing button and the touch-pad screen, plus there is a 10-second safety cut-out to prevent auto-firing. Reverse polarity protection prevents damage to the mod in case you insert batteries the wrong way around; there is dual-circuit protection against overcharging and over-discharging, and the firmware is upgradeable.

JoyeTech used a powerful chipset for the Cuboid TAP to manage a power range between 1 to 228W and up to 50A max output current. The three TCR (Temperature Control Range) modes support titanium, nickel, and stainless steel and a temperature range between 100 – 315C (200-600F). The Cuboid TAP’s chipset will handle atomizer coil resistances from as low as 0.05 Ohm to 1.5 Ohm in TC mode and 0.1 Ohm to 5 Ohm in wattage mode. There’s a preheat function, so the firing button responds instantly. With such versatility, you know it will handle the type of tank and vaping style you prefer.

In our previous review of the ProCore Aries sub-ohm tank which was featured on the eVic Primo Mini, we described it as one of JoyeTech’s best sub-ohm tanks, and it works well with the Cuboid TAP too.

Joyetech are well known for delivering some of the best e-cigarette devices in the world and the Cuboid TAP is another fine example. It’s powerful, it manages a huge range of temperatures and conditions, and the safety features are extensive. It works well with the Aries ProCore tank. The tap-style interaction and haptic feedback make it a peculiar sort of ‘familiar’ – quite different from ‘traditional’ vaping gear. The JoyeTech Cuboid TAP is a brilliant buy for early adopters of new tech – it’s the coolest thing on the block right now!

Take a look at all the Joyetech reviews we have you’re bound to find something you like!