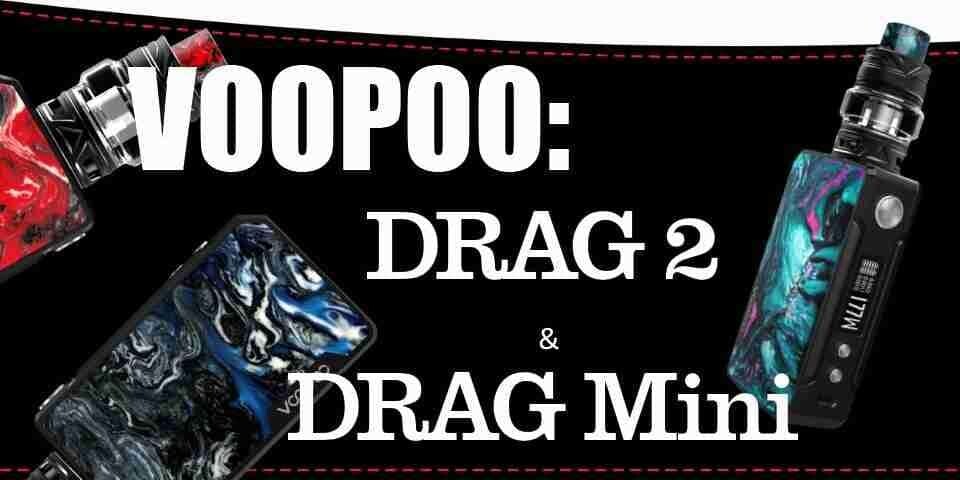 Voopoo had much success with the original Drag when released, and was claimed to be one of the best-selling box mods of all time. So how could they improve things further? So it seems Voopoo was a little bit worried about what to do! Should they release a Drag 2 with the same chipset and performance but improve the design slightly, or reduce the size with an internal battery and slightly less wattage output? Well, they opted for both! Releasing both the Voopoo Drag 2 and the Voopoo Drag 2 Mini Kits! Let’s see how they did in comparison to the best!

When you compare the design of the original Voopoo Drag against the Drag 2, there are only slight changes. First, the size is pretty much the same, the button and screen layout are exactly the same but the edges are more rounded in version 2. For the eagle-eyed users out there you will also notice the side logo is slightly further down on the Drag 2. The only other obvious change in the design is the newly positioned 510 adaptor, which is now in the center.

With the Voopoo Drag 2 Mini, everything has been squashed thanks to the internal battery that saves a lot of room. The Mini apart from the size is exactly like the full-sized Drag 2, with rounded edges and the center 510 adaptor.

You may not notice the other changes, but they include the use of an OLED screen now, which improves the sharpness of the display and uses less power to make your mod last longer, theoretically, but the difference is so small, you wouldn’t even notice!

With the Mini being that much smaller and the use of an internal battery, there’s no surprise that the power is slightly lower, but still pretty good with a maximum power of 117W in comparison to 177W.

Like the full-size Drag 2 runs on 2 external 18650 batteries the total power is obviously dependant on your batteries, but if you use the best batteries then the total mAh is around 6000. The Mini is still pretty good though and has 4400mAh, one of the highest we see in internal battery mods.

Voopoo has decided to carry on using the GENE chip for both devices, and why not? The chipset is really popular and provides a great responsiveness from firing. Don’t fix something that doesn’t need fixing, right?!

The Voopoo Drag 2 has included a feature within its menu called FIT mode, with 3 different modes to choose from. The idea here is to protect the tank to the highest degree of accuracy from burnout and improve performance.

Included in both the Drag 2 and Drag 2 Mini kit is the UFORCE Mesh Tank. It comes complete with a pre-installed single wire coil which is a pretty standard coil. However, they do include a spare N3 triple mesh coil, which is going to be the better coil for taste and performance!

The tank also comes with spare glass, o-rings and has a resin drip tip that matches the design of the mod.

As you would expect also has adjustable airflow on the base, ability to top fill via sliding the top cap and well, that’s about it!

The original Voopoo Drag performed so well in all our tests and we’re pleased to state that both the Drag 2 and Drag 2 Mini performed well too, but with one obvious difference, the power of the Mini.

First comparing the Drag with the Drag 2, there’s pretty much no difference. We tried varies tanks in both wattage and temperature control mode and we couldn’t tell them apart. Switching to multi-coil RDA setups and pumping the wattage to over 100W+, again, no difference. They both perform so well, super responsive, even at the higher wattages and can handle pretty much anything you throw at it.

The Drag 2 Mini is no slouch though! It also performed just as well with the UFORCE Mesh Tank, especially around the 30-70W range. The only difference we noticed was on battery life, which you would expect with the different power ratings, 4400mAh compared to 6000mAh. This was even more obvious with higher wattage coil configurations.

The Drag 2 kit is no disappointment when compared with the original. The GENE chip provides the same responsiveness and power resulting in one of the best box mods this year that can be used with pretty much any tank and coil setup.

The Drag 2 Mini is also great, especially if you like your smaller mods and only using the standard stock coils. Battery life is slightly less impressive than the Drag and Drag 2, but for less size and an internal battery, that’s expected.