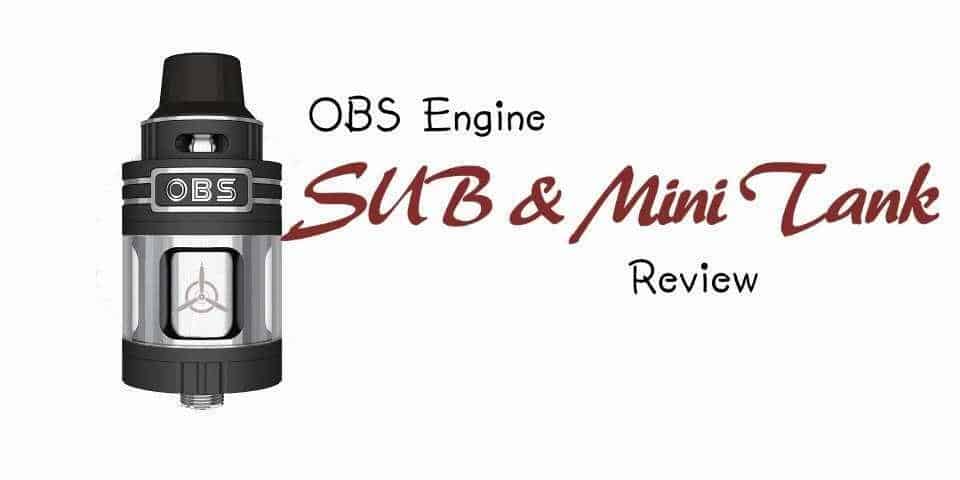 OBS is a lesser-known company that makes tanks, RDAs, and RTAs. We’ve seen a few of their products before, but never had cause to spend too much evaluating them. Recently, though, we were fortunate enough to get our hands on the Engine SUB tank and Mini-tank and thought we’d give them a closer look. In this OBS Engine SUB Tank and Mini Tank review, we’ll examine these devices and see whether they’re worthy of inclusion in your vaping collection.

The Engine SUB tank is a thing of beauty. It’s not the biggest tank we’ve ever seen, but it’s far from the smallest – clocking in at 5.3 ml in liquid capacity. It’s also a top side filling device, which is a nice feature that you don’t often see with new tanks. Filling the tank is simple since all you need to do is lift the cap and locate the port. The liquid can be inserted with a simple tilt of the tank and insertion of the bottle tip.

According to OBS, The SUB tank has a revolutionary airflow system, located at the top of the tank. That airflow can be adjusted by using the collar that sits at the tank’s top. Just twist it to open more airflow or restrict the air that passes through. Nothing more complicated than that. The tank also comes with a couple of organic coils – .2-ohm cotton units – each of which can be used in watt ranges between 40 and 100 watts. There is also an extra glass tube included in the package and O-rings.

We used the tank with the SMOK GX 350 Quad mod as this has the best spec to deal with such a tank, and tried our favorite Mad Hatter e-juice with the device. The first thing we noted is that new coils do need to be primed properly. That’s a simple matter of dripping a couple of drops of juice onto the cotton, and letting it settle in for 3-5 minutes before you fire up the device. Once primed, the tank will work perfectly for your vaping needs.

The SUB tank performed admirably at different wattage ranges and never seemed to overheat. Yes, there is a bit of a burn on those first few draws, but most experienced vapers understand how to get past that. Now, here’s the thing: we enjoyed plenty of flavors, and noticed that the mid-range wattage settings seemed to provide the perfect proving ground for our tests.

The SUB mini tank is an interesting take on this tank design. At first glance, we were convinced that we were going to see a somewhat inferior set of results from the smaller tank. It is, after all, a 3.5 ml capacity design, so we expected some corners to be cut in other areas as well. As it turns out, though, we were happily surprised to find no real fall-off in performance. That may be due to the size of the device’s coils. They really do a bang-up job pulling juice out of the tank to ensure continuous quality of flavor and vapor production.

Important Note: With this tank we built our own 0.36ohm 26GA pre-wound clapton coils and Kendo Vape cotton to really put this thing to the test! Some people maybe put off with the RTA option, but most experienced vapers will tell you this is the way to go!

It’s also important to realize that neither of these tanks has that seal that you usually see between the atomizer chamber and air tube. That seal is usually there to create the pressure needed to help draw juice up when you inhale. In this case, the devices instead rely on those coils to do the job. It’s not something that I would have thought of trying, but it seems to work – even at the higher wattage ranges.

The mini offered that same level of continuous vapor and flavor that we received with the Engine SUB tank and handles everything from 50 to 90 watts really well. We never got any spit back, flooding, or leaks, and had no problem refilling the tank once we depleted its contents. All of that is pretty academic, though, when you consider the flavor. Unlike many minis we’ve tried, we didn’t see any drop-off in quality from the larger tank to the mini. If anything, the flavor was even better than we received with its larger counterpart.

If I had to make a recommendation about which one to choose, I’d probably refuse to pick. My best recommendation would be that you get them both. The larger Engine SUB tank is better for those large clouds of vapor, though it performs admirable for flavor production too. The mini is a flavor beast, though we never managed to get quite the same level of vapor out of its usage as long as you don’t mind building your own coils. The one thing that you need to consider is the mod you run these things with, you can check out our guide to the best box mods that should help, but overall we were pretty impressed with both OBS engine tanks.