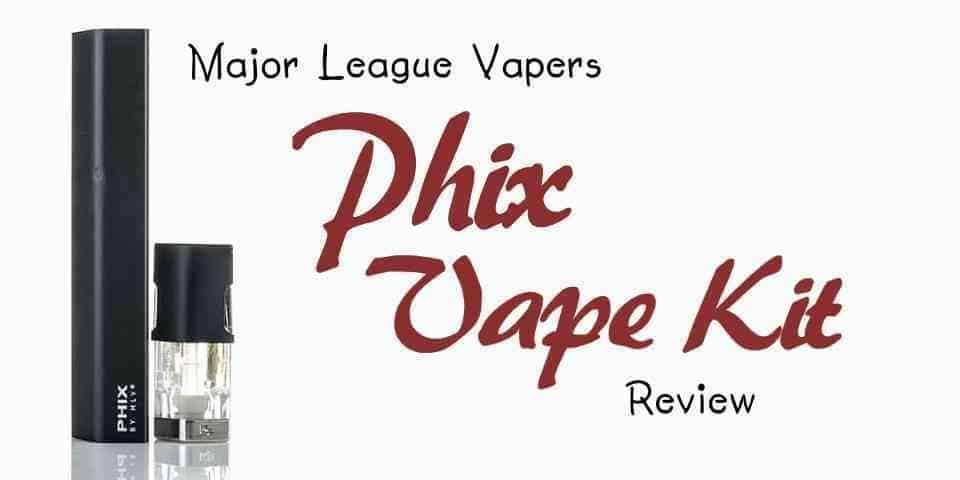 All the main manufacturers have started to release pod systems into their collection of electronic cigarettes, which seem to be really popular with new vapers. Major League Vapers (MLV) is another manufacturer who believes their Phix Vape Kit is up there with the best. We take a closer look at this pod system e-cig or vape pen to see how good it is against the BO One vape pen and the JUUL e-cig.

One of the things that are particularly good about these pod pens is the beautiful, sleek and modern design the manufacturers manage to pull off. The Phix Vape kit is a little larger than the BO e-cig, at 110mm (11cm) tall and about 3mm wider at 18mm (1.8cm), but it’s still pretty small!

It sports the diamond shaft which does make it thinner at the edges which helps reduce the overall size of the pen.

Unfortunately, you are stuck with one color, black. Bit of a shame, but the black in other pods is by far the most popular color, so it’s not that of a big deal.

The pods do come in multiple flavors, all of which are of one nicotine strength of 5%, so this tells you right at the door that this pod system is really for those smokers out there, looking for an e-cig to quit smoking with. The flavors include hard strawberry, spearmint, cool melon, and tobacco each having a subtle yet deep flavor when you vape on the pen. Each pod should last approx 400 puffs, depending on how hard you vape!

Unfortunately, the pods are not refillable, you do have to purchase them prefilled, but this again is not uncommon and similar to the BO vape pen and Juul pens. They are simple to mount, simply remove the rubber stops and slide into position until you feel the magnets take hold of the pod.

The pods actually utilize a ceramic wick to enhance your vape experience and make the vape that bit smoother. Although with the high nicotine levels it still comes across a little rough.

One of the coolest features of the Phix vape pen and other pod type pens is the simplicity they have to use. As long as it’s charged, all you have to do is vape it like a regular cigarette thanks to its automatic draw switch that turns the device on when it feels you use it. Basically they are a modern design to the classic cigalike e-cigs.

There’s no playing around with wattages, resistance levels, nothing! Just pop your pod in and start vaping.

There is a battery indicator in the middle of the shaft, letting you know when the battery is in use, it also stays on whilst charging and turns off when fully charged.

Each full charge is recorded to last approximately 200 puffs which are equivalent to half a pod, but this really differs from user to user as everyone vapes a little differently, it’s more of a guide.

The resistance of the Phix vape pens measures around 1.4-1.5-ohms so it’s really meant as more of a mouth to lung vape than a direct lung inhale, and with the high nicotine level, it’s actually a bit smoother if you adapt to this style of vaping.

The 280mAh battery is a little disappointing, considering its larger than the BO pen, yet holds less current/charge.

The vape on the Phix vape pen is actually not as bad as we thought it was going to be from a 5% nicotine pod, mainly thanks to its ceramic pods. That said after 3-4 continual puffs you do start to feel a scratchy feeling on the back of your throat.

The vape production is good, not as much as you see when vaping on one of the top vape mods, but still a decent amount.

Some may feel that the higher nicotine levels on the Phix Vape kit are more suited to them, but you must remember the higher the nicotine the less smooth the vape will be, ultimately making it more difficult to actually quit.

That said, when you get used to this pen it actually performs really well and one of the best e-cigarette products in its class, granted the battery is less powerful than the BO vape pen and the overall design is larger, but the similarities are very close indeed.

It is slightly cheaper than the other pod type pens, but it is sensibly priced. If you want more for your money then pick either the BO or Juul, if you want the cheapest pen just to try then the Phix Vape Pen is certainly a good pick!