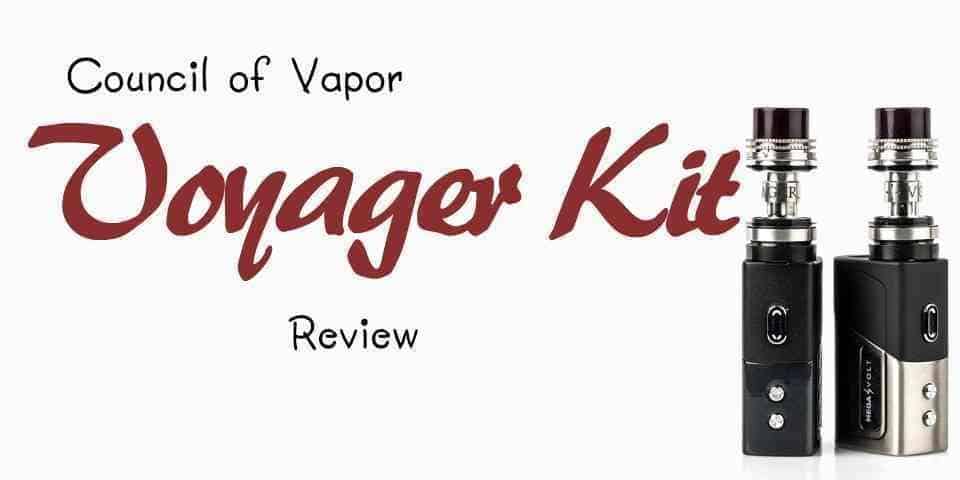 If you’re familiar with Council of Vapor, then you already know that they’ve been providing some of the most innovative vaping products for several years now. We recently had a chance to take a look at the new Voyager kit and were eager to see if it lived up to the company’s hype. In this Council of Vapor Voyager kit review, we’ll tell you what we discovered as we examined this kit and put the Voyager product to the test.

The Voyager kit might seem to be misnamed since the only part of the kit that goes by the name “Voyager” is the tank. The mod that’s included with the package deal is the Council of Vapor 80W Mega Volt mod. Most consumers are accustomed to having the kit named after the mod, but the company apparently decided to go in a different direction with this one. Evidently, “Voyager” has a nicer ring to it than “Mega Volt.” It was probably a sound decision from a marketing standpoint, despite being a little confusing for some buyers.

So, as you might guess, this is one of those combo kits that offers virtually everything you need for your vaping enjoyment. The box contains the aforementioned CoV Mega Volt 80W mod, as well as the Voyager sub-ohm tank. This is a starter kit, so it offers a perfect entry point for anyone who’s trying a mod for the first time or those of you who love Vape Pens but concerned about the size of Vape Mods. More importantly, the kit comes at a reasonable price – under $45!

The mod itself is a compact unit, in line with the current trend throughout much of the industry. It measures just 60mm by 39mm by 24.5mm and is constructed from the popular zinc alloy that helps to provide durability to so many of today’s mod products. The exterior is beautifully contoured, and it comes in an attractive two-color scheme. You can get one in either gunmetal finish, or black and stainless steel. No other color choices are available – at least not at this time.

Being so small, it easily fits in your pocket so is more suited to be carried around with you discretely. As the power rating is relatively low I guess it’s more aimed at those out there looking at vaping to quit smoking and not the cloud chasers.

Like Council of Vapor’s other new product offerings, this one relies on the company’s own chipset design to handle all its many features. Fortunately, this chip seems to be proving itself up to the task and has performed admirably in the CoV products we’ve examined to date. For the Mega Volt, the chip has its work cut out for it, though, as this is a feature-rich device that offers a nice range of temperature controls that can handle everything from titanium and stainless steel to Ni200 Nickel.  Naturally, the chip is also responsible for managing the device’s 80W power output, so it’s definitely one busy piece of technology.

Of course, we didn’t like everything that we found. For example, the battery choice – an internal 20500 battery – leaves us unimpressed, unlike their Callisto Kit that has a removable 18650 battery, but I guess they were concerned about size over performance. Sure, the company can say that it offers extended life, but that particular battery type isn’t one that we would pick if we had any say in the matter.

And speaking of small, the tank is nothing to get excited about either. The Voyager is a sub-ohm tank but offers just 2ml of capacity for your e-juice. There’s a cognitive disconnect there since our sub-ohm vaping sessions always use more juice than normal. With that in mind, you would think that a sub-ohm tank would aim for a higher capacity to help us avoid constant refills.

Other than its capacity, however, the Voyager is an outstanding unit. It uses a sliding-top system for refills and offers dual airflow controls at the bottom of the tank. That’s a nice design that we found to be easy-to-use and quite effective. Naturally, Council of Vapor went all-out in their coil design and clearly made these coils with flavor retention in mind. Don’t expect mind-blowing clouds of vapor, even at your best sub-ohm settings. Instead, you can expect reliably consistent vapor production and excellently pure taste with every draw.

From a performance standpoint, we have to give this a thumbs-up, although clearly not one of the best vapes and e-cig in its class. We may not like the choice of battery, but the product makes up for it by offering a quick recharge time of only 30 minutes. Moreover, we loved the pure taste that the setup provided, and would recommend it to anyone who cares more about flavor than chasing room-filling clouds of vapor. Overall, this is a quality product that should withstand regular use without breaking the proverbial sweat. Whether you’re a newcomer to mods or a more experienced user looking for a new option, we suggest that you give the Council of Vapor Voyager kit serious consideration.