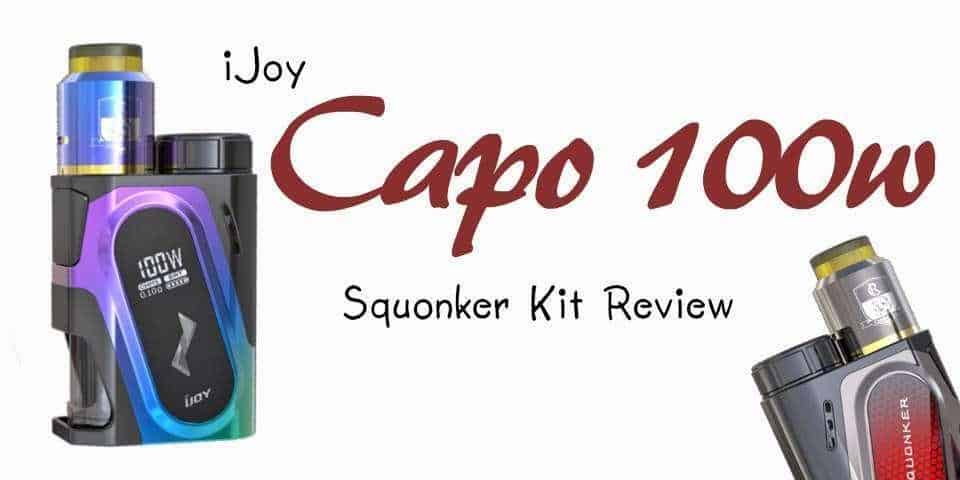 Squonker mods are becoming pretty popular these days and the theory behind them is nothing but awesome, allowing the vaper to get the best of both worlds, i.e. the full flavor you get from an RDA and a squonk tank to drip it with without having to carry a bottle around with you. The new iJoy Capo 100w Squonker Kit is one kit that offers the lot, you just need to add your juice and build your deck. The question, however, has iJoy built the first real useable squonk mod fit for purpose and suited to everyone? We’ll also ask the question if this is one of the best vape mods on the market. Let’s find out with our review.

We think iJoy have done a really good job with the design, it looks great and being a squonker, it’s pretty small considering. They have managed to create a bottom fed squonk mod that’s regulated, although there is a bypass mode if you prefer.

The mod is designed well giving you easy access to the squonk bottle to one side, with a rather large firing button just above it. The OLED screen is nice and shows all the information you expect from a regulated mod including wattage, resistance and battery life.

The two adjustment buttons are below the screen and kind of looks like a lightning flash, but very responsive. To make the mod as small as possible they have a protruding battery cap at the top of the mod, which we not too sure about, but we can live with! It also has battery ventilation holes to allow any excess heat for those safety cautious vapers out there!

The cage around the squonk bottle is held in place via a magnet and easily removed to allow refilling. Just pull the bottle downwards making sure not to bend the center pin. There are 2 bottles in the kit, one white and the other black both of which hold 9ml of juice, which is awesome! You won’t find a tank that big, even on our list of the top 5 sub ohm tanks!

This is a fairly easy and dare we say basic mod to use. Simply click five times to turn the mod on and off. You can then use the up and down buttons to adjust wattage from 5W all the way up to 100W.

With all new builds it’s best to prime the coils first, and lightly pulse the fire button to really get that juice circulating. You then can squonk the bottle to add more juice into the RDA tank which has a reasonably deep juice well. You can learn more about these types of tanks when we compared RDA tanks to RTA tanks.

It does come with a 20700 battery, but you can use 21700 and it has a full-length adaptor for a 18650 battery. We found it sucked the life out of the 18650 battery pretty quickly, so we wouldn’t necessarily recommend them, but it’s nice to have as a backup if you have those types of batteries lying around.

The white bottle is a lot easier to use than the black bottle as they included a soft part to make life a little easier! In general, the squonker works really well, providing the juice when you need it. It’s nice also to see the pin that takes the juice to the tank goes all the way to the bottom of the bottle, meaning you can suck up pretty much all the juice!

We found that around 0.1 and 0.15 ohm builds works best, bringing the most flavor from this tank, but it’s a little subjective as it depends on your juice, if your using stainless or nickel coils, and the type of cotton you use to vape with. Nevertheless, when you get the build you like this tank performs really well, coupled with the functional, easy to use and regulated squonk mod, we really happy with the performance.

What’s In The Kit

The iJoy Capo 100w Squonker kit is a really easy to use squonk mod kit that performs really well with the right build. It’s nice to see a regulated squonker on the market now, but the battery performance, as you would expect from a single 20700, 21700, or even 18650 battery, which this mod uses, is not going to compete with any dual battery mod.

Therefore we can’t really say it’s one of the best e-cigs in the market, but, and it’s a big but, if you haven’t tried squonking before, then the iJoy Capo 100w Squonker kit is perfect, it comes with everything you need including the battery and also the coils and cotton, so take a look around and get one today!