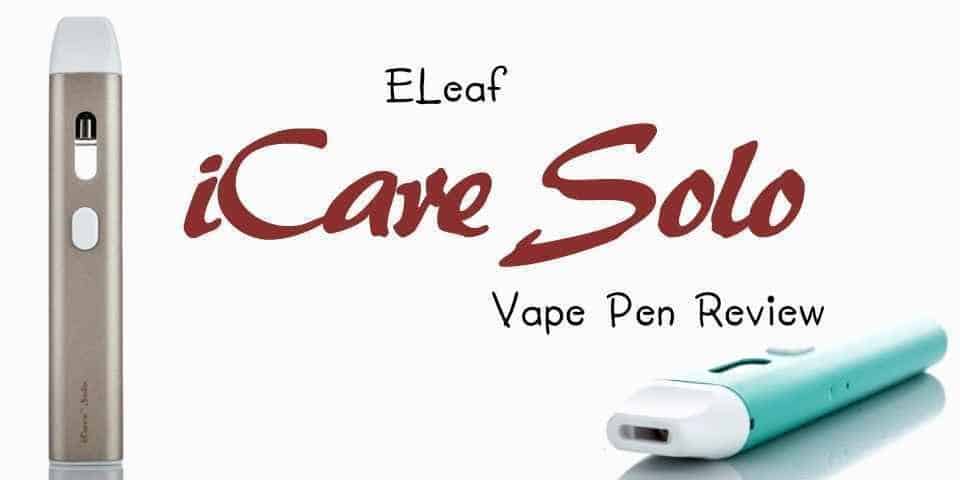 The eLeaf iCare range is well-established, but eLeaf has adapted their technology slightly to make the tiny eLeaf iCare Solo even simpler and easier to operate. Let’s see how their internal tank design works and find out if it is one of the best e-cigarette products out there, like those that you can find here.

The internal tank is fixed and cannot be removed. “Lock & Load” for a unit with an internal tank is a brilliantly simple operation: Fill the tank with e-juice, attach the IC head (coil) to the air pipe, lower the unit into the juice and secure. So simple, so effective making it one of the most ideal e cigs to quit smoking with!

There’s a see-through panel on each broad side of the vape pen. The silver cylinder visible in the middle of the juice tank is the air pipe of the atomizer with the removable coil unit (the IC head). It’s easy to keep an eye on juice levels, and the max juice level indicator will prevent overfilling. The tank holds 1.5ml of e-juice.

Up Close And Personal:

eLeaf has standardized the colors and finishes of most of their vape pens to create a signature look for their iCare range. The iCare Solo is no exception and is available in Silver, White, Black, Cyan, and Red. However, the iCare Solo stands out from the rest of the iCare range with a unique shape and size. Like the tiny JUUL, the Solo is very small and deviates from the traditional round shape of vape pens. The flattish pen is 18mm wide, 11mm thick, 104.5mm tall and weighs just 31 grams.

The mouthpiece and firing button is a brilliant white, except of course for the black pen which is a pure black throughout. The atomizer and juice level is clearly visible through the see-through panel on the front. When you hold the Solo up, the USB charging port is on the right side panel, at the same level as the firing button. There is one small LED indicator light on the left side panel.

The 350mAh battery cannot be removed unlike the traditional 18650 batteries but this one is built into the bottom part of the Solo. It delivers a respectable 15W, which is more than enough to provide a modest cloud of dense vapor. The battery doesn’t last very long. However, the 1A recharge rate means that it takes around 15 minutes for a full charge. Smart-chip technology protects the user and the battery with short-circuit protection.

The mouthpiece can be popped off and will reveal a rod that contains an airflow hole on the base. Unscrew the rod, gently lift the rod out of the tank, and fill up to the max level. You don’t have to look for the re-fill hole because the part you just removed contains the air channel. Happily, this means you can’t mistakenly drop e-juice down the main channel. Refill, replace the rod, tighten, and vape!

Although airflow is not adjustable, the new iCare Solo has two small air flow holes at either side of the mouthpiece rather than just one large hole like the iCare Mini. This arrangement provides a tighter draw, so both MTL (mouth to lung) and DL (direct lung inhale) users will be able to get satisfactory vapor and taste.

This is an unregulated or auto-vaping device with no settings or adjustments. The fire button activates a tiny LED light on the side panel. The color changes as the battery charge level changes.

There are three notification colors:

eLeaf developed the IC 1.1ohm head, especially for their iCare series. It is a very small single coil prepped with organic cotton. The kit comes with two coils, one of which is pre-installed. This coil indeed produces sufficient vapor, and a better than adequate flavor.

eLeaf is doing well in competing for the best vape pen products on the market with their simple to operate but powerful products. The iCare Solo is good enough that even long-time vapers might turn to this super-portable little gem to keep them in vapor during commutes and outings. We would advise smokers to start off with e-juices made with nicotine salts rather than freebase nicotine, as the delivery of sufficient nicotine could be crucial during the first attempts at switching to vaping.